Reed Mariculture is the world’s largest producer of marine microalgae concentrates and a pioneer in the effective use of RAS technology since 1995.

In 1995, Founder and CEO Tim Reed set out to develop a small, artisanal land-based bivalve operation – the idea being to grow from oysters to exotic bivalves for regional restaurants. In order to make the concept work, he needed to create a closed, recirculating system that supported both the bivalves and their preferred food – marine microalgae. Despite all odds and advice to the contrary, he was successful. While presenting at the World Aquaculture Society meeting in 1997, he discovered that there was more interest in the algae than the oysters! Even more importantly, that algae was not only a critical component to hatchery success, but that growing enough, reliably and consistently, was an ongoing challenge across many saltwater species. So the RAS bivalve system was modified to be a RAS microalgae system, he developed technologies for harvest, storage and packaging, and we’ve been producing only those microalgae specifically used in aquaculture 24/7 ever since! Our inland RAS seafarm produces quality marine microalgae day in and day out, free of all typical vectors of contamination, to supply aquaculture’s babies with the cleanest, highest quality and most natural food available. 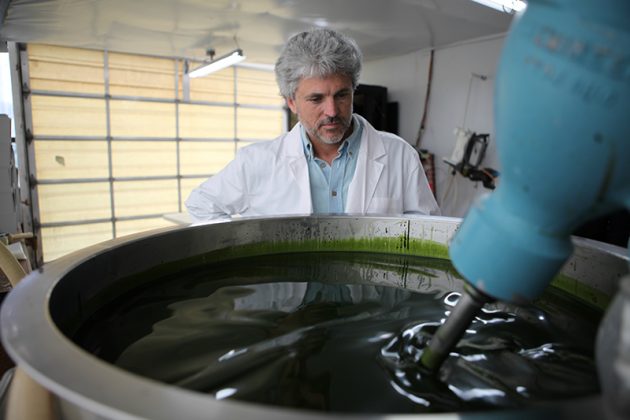 Our Instant Algae® Marine Microalgae concentrates are used by over 500 hatcheries, universities, and marine ornamental operations in more than 80 countries around the world. We also produce zooplankton, copepods, and weaning feeds. Our Instant Algae products are closer to nature than any other feed on the market. We produce whole-cell, whole-food microalgae feeds and enrichments from marine algae using proprietary processes. Our products provide fish, bivalve and shrimp hatcheries with clean, convenient, long shelf-life feeds that are superior choices to replace or supplement live microalgae. Our feeds ensure stable and rapidly  reproducing rotifer populations that offer rich nutritional value.

We pride ourselves on our customer service and technical support. In addition to our expertise growing microalgae, we provide rotifer starter cultures (10 million to over 1 billion rotifers) and all the support necessary for customers growing their own cultures. We are also experts in shipping logistics, however remote your location. Our commitment to excellence will keep you coming back to Reed Mariculture.