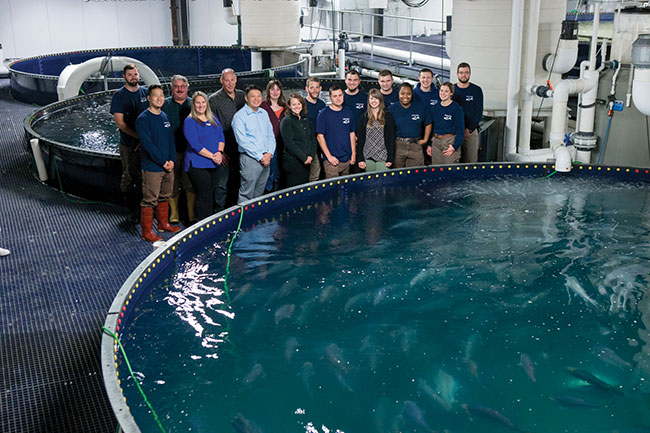 John Ng, CEO of Hudson Valley Fisheries, with some of his staff, most of whom are below 30 years old

Life doesn’t always go according to plan. Ask John Ng, the entrepreneur behind Hudson Valley Fisheries (HVF), a recirculating aquaculture system (RAS) facility producing steelhead trout in upstate New York. Like many Asian immigrant kids, Ng had his sights on a medical career when he first entered university, but the pull of entrepreneurship was strong. That wasn’t surprising as Ng was raised by a businessman father who started a metal recycling business in the late 80s. From its mom-and-pop beginnings, the business has since spawned more than 20 companies across North America.

On the surface, recycling and fish farming seem very disparate industries. Ng will also be the first to acknowledge that he knew nothing about fish farming when he purchased a defunct indoor tilapia farm in the City of Hudson in 2014. What he knew was that both industries, done sustainably, could have positive impact on the environment.

“We always viewed recycling as an industry that’s positive for our environment and our society,” Ng tells RASTech. “Metal recycling is not a pretty industry but it is a very beneficial one. When we became exposed to aquaculture, our thought process was that the oceans continue to be overfished. This method of raising seafood on land in these systems is a window to the future. It spoke to some of our core principles.”

This, coupled with his understanding that the world has “unlimited appetite” for seafood, led him to aquaculture.

While site cleanup was underway, Ng was deciding which species to farm. He eventually went with steelhead trout (Oncorhynchus mykiss), a hardy fish known for its ability to “pack on weight and they pack it in fast.” It also has a good track record in RAS systems.

Building the facility took roughly two years. A lot of the farm’s technology is off-the-shelf. What’s proprietary are the “processes on how we do things, how we use that equipment,” says Ng.

By the time the farm started operations, Ng had retained some of the staff involved in the construction phase. “I was lucky to have found excellent talent to operate the fish farm. They grew up with us and now they’re part of the actual fish farming operations. That speaks to how my team is,” he says.

Early struggles
HVF made its first “true-market-ready” harvest (5,000 lbs of steelhead) in the second quarter of 2018. Looking back at the four years since acquiring the defunct fish farm, Ng considers them as opportunities for learning.

“We worked through a number of struggles,” he says. He recalls being roused from sleep on the wee hours of a Saturday when a faulty oxygen valve killed the very first batch of eggs put into the system.

Such stories are not uncommon in land-based farms. Ng says they speak to the complexity of these systems.

“The more complex something is, the more prone it is to issues on the mechanical side,” he says. “We work with a total of seven independent systems for our fish, from nursery stage all the way to grow-out. Every one of those systems is complex so we put each one through what we call a ‘shakedown’ or a testing period, where we make sure everything’s working. We run a small group of fish through it to test it. We don’t want to take the risk of building a system that didn’t work in the final hour.”

Another issue that had to be addressed was the hard water in the Hudson Valley. It was “okay for the fish” but it wreaked havoc on the equipment. “We brought in a large system to soften the water. That’s been a significant challenge. We decided to do something about it because we’re driven to complete our goals,” he says.

Market perception
Ng says the biggest challenge for him is not the technology but the consumer perception of farmed fish.

“Farmed fish still has a dark cloud over it. People hear that we are a farmed product and assume that we have the same issues. But the fact of the matter is our product has none of the detriment of the traditional farmed products. We don’t use antibiotics in our growing operations, no vaccine, no herbicides to keep nets clean. We’re safe for the environment. You can’t tell me you don’t use vaccine when you run a net-pen operation where the fish are exposed to the environment,” he says.

In the early days, Ng was also up against the northeast market’s unfamiliarity with steelhead. However, he started seeing a shift in consumer acceptance over the past year as its brand “New York Steelhead” gained traction in both mainstream and social media.

“I don’t think I’ve ever interviewed once when I was operating a scrap company,” he says, smiling. Nowadays, public speaking and facing the media is something he has become accustomed to.

“Our biggest outreach has been publications picking up our story as well as social media. The most notable one is The New York Times. They did a little story on sustainable seafood and mentioned land-based steelhead,” he says. “That’s where one of our biggest challenges has been and continues to be. It is to expose the market that what we’re doing.”

HVF delivers its fish to surrounding markets – New York, Boston, Philadelphia and Washington, DC – within 24 hours of harvest if it is head-on gutted (HOG), or within 48 hours if it is filleted.

After overcoming trials and errors, Ng now has the confidence that was sorely lacking when the project first started. He is now looking at ramping up production, taking it from the current 30 percent of capacity to the full 1,200-ton capacity, annually.

He is also looking at replicating the pilot facility in other locations, pretty much following the same trajectory of his father’s recycling business.

“We never thought of it is as a one and done,” Ng says of the HVF operation. “We saw this as a prototype, a model, because we want to deliver fresh local product to the market. Our target would be to build similar facilities throughout the major markets in the U.S. and around the world.”

One advantage he has over other RAS operations that has to raise funds in order to proceed to the next phase, is that Hudson Valley Fisheries is entirely self-funded. “We don’t have to consult a whole board of six different voices to make effective decisions. Beyond me, it’s my father, so the buck stops right here,” he says. 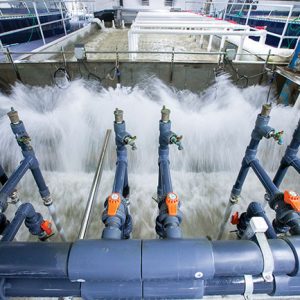 One of the earlier challenges at HVF is the hard water in Hudson Valley, which wreaked havoc on the equipment. 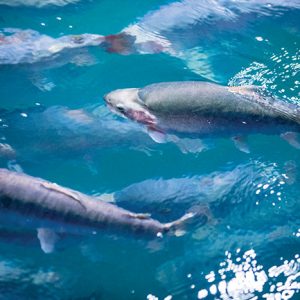 Eyeing aquaponics
Ng is also setting his sights on building an aquaponics farm in the same Hudson Valley property. The 130-acre landholding has 20 acres that’s tillable and 16,000 square feet of indoor space that can accommodate a greenhouse.

The “explosion” of the hemp industry over last three years has prompted Ng to grow hemp in the property. Like the steelhead farm, he plans to develop the hemp farm into a true commercial-scale enterprise.

“There’s never been a better time to look at growing hemp,” he says. “We’re somewhat limited by our tillable farmland but we’re not limited to being a greenhouse operation. There’s plenty of property to put up additional greenhouses.”

In 2019, he had six acres of the farmland and some greenhouse space planted with hemp. Fish nutrient water from the RAS farm was used to water the hemp field. More than 24,000 lbs of hemp were harvested from that pilot planting.

“We had exceeded our expectations in terms of the biomass that we grew as well as the CBD content of our harvest both in the greenhouses and the fields. Typically, I think people expect to harvest 2,500 pounds per acre. We hit nearly 4,000 pounds an acre,” he said.

Expansion plans
Ng has big plans to accomplish over the next five years.

“I see an expansion of our agricultural products beyond hemp into produce, which we already planned. I see growth into a different facility and maybe a different species. But definitely growth including value-added products like smoked product. It doesn’t stop there. My aim is to use every bit of the fish as we can.”

The HVF chief executive also wants to educate future fish farmers. “Every article you read these days say the talent pool for aquaculture worldwide is somewhat limited. I’ve heard a lot about the ageing population of the farming industry, how skills are not being handed down from one generation to the next, that the younger generations are leaning towards more tech jobs. But here I got a farm in upstate New York where the majority of the staff is below the age of 30. It wasn’t our goal when we started but it is now – to help train the next generation of fish farmers.”

This is not farfetched. The farm already offers internships to schools in the area that have aquaculture courses, such as SUNY Cobleskill which is just a 1.5-hour drive away, and Cornell University which has been offering a RAS course for the past 25 years.

Hudson Valley Fisheries also helps educate the young generation of chefs about what sustainable seafood looks like. It has offered lectures at the Culinary Institute of America and the College of Culinary Arts at Johnson & Wales University.

“We are not in the investing game to just build it, sell it and we walk away. We’re doing this not only so that our children will have food to eat but also so that my children will take this on,” he says.