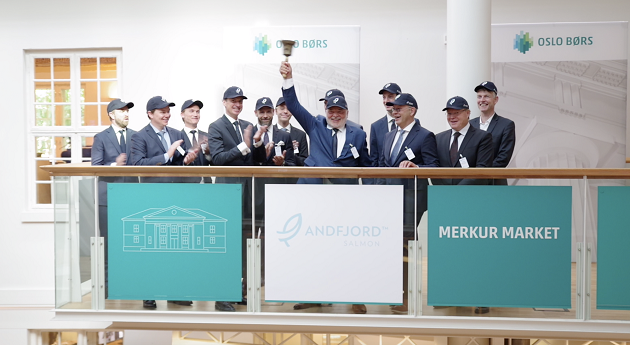 Andfjord Salmon on Tuesday debuted at the Oslo stock market with an estimated value of $230 million, strengthening the company’s plans to build a giant land-based seawater farm venture in Kvalnes, Norway.

The Norwegian aquaculture company was the first to ring the bell at the Merkur Market since the market shutdown in March due to the coronavirus outbreak, according to the news media E24.

“We are very pleased and surprised by the activity. Turnover and interest are greater than we expected,” Andfjord acting chairman Roy Brent, told the media outlet.

“The capital we now have access allows us to build the world’s largest and most environmentally friendly aquaculture plant of its kind,” said  Martin Rasmussen, chief executive officer of Andfjord.

Andfjord Salmon has obtained a licence to produce 10,000 metric tons of salmon annually at Andoya.

The six-year-old company said the project, which involves the construction of large pool pits below sea level in quarries in Andøya Island, is more than 60 per cent completed. Andøya  is the northernmost island in the Vesterålen archipelago, situated about 300 kilometres inside the Arctic circle.

Plans for the facility calls for the construction of eleven seawater flow-through pools. Each pool has a volume of 35,000 cubic meters measuring 45 by 40 by 20 meters.

The company wants the first pool to be able to produce 1,000 tons of salmon by the second half of 2020.