Features
Made in Maine

The makings of a North American RAS hub 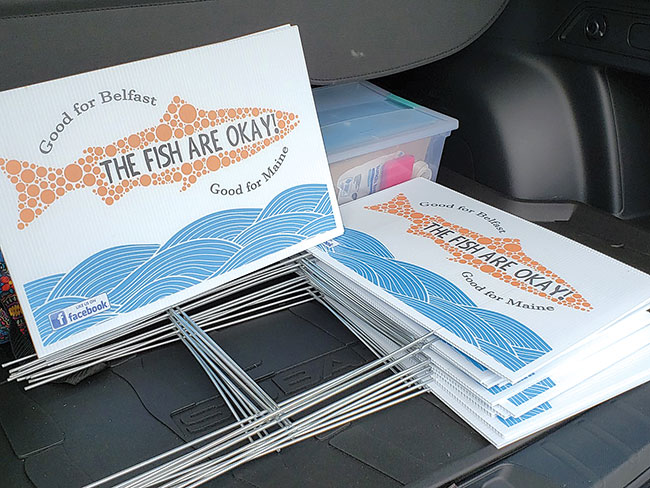 Lawn signs supporting Nordic Aquafarms. The grassroots movement was started to counteract other residents who opposed the proposed land-based farm in this coastal community of 6,714 people (Credit: Anne Saggese)

The prospects for land-based recirculating aquaculture systems (RAS) to raise salmon in Maine have intrigued investors and enticed political leaders eager for new jobs in the state.

But some skeptics question their financial projections. Others in this New England state, known for its lobsters, quaint villages, and scenic national park, are breeding a general distrust of aquaculture that goes back decades. To move forward, aquaculture leaders are honing key skills in both investor and community relations.

Three RAS companies—Aquabanq, Nordic Aquafarms, and Whole Oceans—are navigating the complex process of obtaining permits and preparing for construction of mega facilities that could quadruple US salmon production in just a few years.

They join Cooke Aquaculture, the only net-pen farmer currently operating in Maine, which is also interested in expanding. However, after local lobstermen pushed back, Cooke has yet to file its application for a new 40-acre lease, according to the Maine Department of Marine Resources.

These dynamics raise the specter of entrenched, competing interests. “The US has had a challenging relationship with aquaculture,” acknowledged Erik Heim, Nordic Aquafarms president.

Location, location, location
The CEO of Aquabanq, AJ Shapiro, is a former investment banker. It’s no wonder the company’s US website would increase the pulse rate of any investor.

Its proposition is: The market in the US for salmon is growing, but reliant on imports, and RAS occupies a “pole position” to compete against traditional producers who use hormones, vaccines, and antibiotics. By locating nearer major US markets, land-based growers can reduce transportation costs and capitalize on anti-carbon consumer perceptions.

With aquaculture veteran Bent Urup as chief scientist, Aquabanq plans to scale up to 10,000 metric tons (MT) by 2025 in the former mill town of Millinocket.

At this potential turning point in aquaculture—dubbed by economist Peter Drucker as “the most promising investment opportunity of the 21st Century”—Maine has attracted land-based ventures not only because of its proximity to major markets, but also its coastline, which is longer than California’s. Plus, it has over 32,000 miles of rivers and streams. Cold, clean water abounds after decades of environmental efforts, which many remember.

Whole Oceans plans to locate alongside the Penobscot River in Bucksport, where they too will build on the site of a former pulp and paper factory. That once-robust industry has declined sharply, but employed one quarter of Maine’s manufacturing workforce in the 1970s when salmon farming was just starting. Now RAS may be bringing back jobs in those riverside communities. 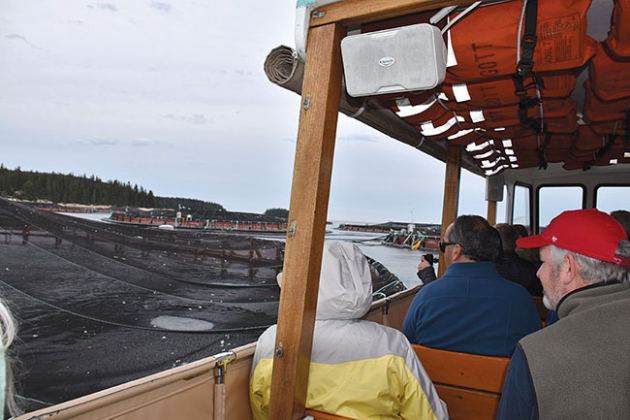 Visitors to Maine’s Acadia National Park lean in to see salmon leaping inside Cooke Aquaculture net pens near Black Island. These tourists were quiet and curious, but others have confronted the tour operator about antibiotics and ‘bad waste.’ (Credit: Lynn Fantom)

The time is right
The technology for land-based aquaculture has improved dramatically in the last five to 10 years, according to Sebastian Belle, executive director at Maine Aquaculture Association. Advances include low-head oxygenators, pumping systems that require much less electricity, more efficient filters, reductions in makeup water, and more energy-efficient facilities.

“There is a paradigm shift in the cost to produce the fish,” notes Michael Timmons, an environmental engineer at Cornell University, who has written the textbook Recirculating Aquaculture. Assessing the viability of the new ventures in Maine, he says, “Environmentally, technically, and with production, I’m really confident they will be successful. They’re going to generate a lot of jobs, which is key to our community survival.”

The pain of permits
The technology may be here, but the process to launch the business is complex, starting with permits. Nordic Aquafarms, in fact, posted a “Permitting Primer” on its site to help residents understand the rigorous municipal, state, and federal requirements.

Palom Aquaculture acquired permits for its RAS farm in Maine in 2014, making it the first RAS operator to do so. But it can’t start construction until it gets more capital. Managing partner Bryan Woods told the Bangor Daily News that he and his six partners are looking for either the cash for them to proceed or an ownership buyout, which will include both the permits and 17 acres in Gouldsboro.

The early stages of Nordic Aquafarms’ efforts in Belfast have also been tumultuous. Two parties have sued (one lost already).The company invested in a 2,000-page application. Now it is working through a series of special public meetings on issues such as visual impact; impact on historic and archaeological sites (e.g. shipwrecks); soil-erosion control and water use.

Aquaculture advocate Belle believes that behind these challenges to Nordic Aquafarms is “a fundamental demographic shift in our coastal communities,” pointing to the retirees. (Maine now has the oldest population in the country.) There is tension, he says, between those who value Maine as a recreation center and working waterfront families who use it to make a living.

But the issues may go even deeper.
Nordic Aquafarms encountered a “subculture” fundamentally resistant to fish farming, Heim says. Whether because they are vegans, critics of food waste, or proponents of restoring wild salmon, “the facts don’t really matter because it’s ideological.” It is the same kind of polarization that has stung so many US communities.

Still, Heim, who has already financed three land-based facilities in northern Europe, has made steady progress by setting up a local office with a walk-in policy, conducting voluntary public meetings, publishing a monthly newsletter, even visiting opponents at home to hear their concerns.

And facts have paid off with other constituencies: top Maine environmental groups issued letters of support, US Senator Angus King visited the Belfast office last August, and a grassroots counter-movement mounted a campaign, “The Fish Are Okay.”

In the end, Heim scopes the annual production of the Belfast facility at 30,000 MT after three expansion phases.

The real challenge: implementation
In contrast to Belfast, which is only 20 miles away, Bucksport’s Planning Board whizzed through a review of Whole Oceans application, granting approval in less than 90 minutes. This town of 5,000 has been eager to attract new business since the 2014 closing of Verso Paper, which had been its largest employer and taxpayer.

Although the final go-ahead is contingent on another permit, Whole Oceans planned to begin demolition and ground-breaking in November.

Now that the company is moving into this next phase, Jacob Bartlett, CEO of holding company Emergent Holdings, the private investment partnership he started, has assumed the day-to-day leadership role. Previously, Bartlett headed sales at Pranger Enterprises, an Indiana-based construction company serving aquaculture, “whether a large project or a small mechanical need,” according to his LinkedIn.

But Bartlett knows he will need expertise to run an operation as big as Whole Oceans, which eyes an eventual annual capacity of 20,000 MT. Emergent offered to buy a majority stake in British Columbia’s only land-based salmon farm, Kuterra, to help it capture at least 10 percent of the North American market as well as train staff in the Bucksport facility. But in July, the ‘Namgi First Nation, Kuterra’s owner, rejected the deal.

Success factors
Heim agrees that expertise is key. He has put a premium on hiring experienced people, who will have the advantage of tapping into protocols developed by their European counterparts. “In my strong personal opinion, [one needs] the know-how related to RAS, operating it, and dealing with live fish in the system 24/7. If you underestimate that, you’re going to fail. It’s not enough to think you have technology,” he says.

But then Timmons from Cornell circles back to the financial proposition to gauge potential success: will net sales be high enough to support operating costs? “That’s the risk factor,” he emphasizes.

(This article was originally published in Aquaculture North America, a sister publication to RAStech.)