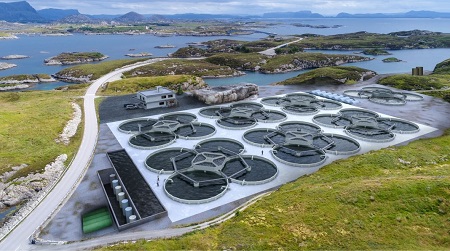 An innovative land-based aquaculture concept that uses seawater is finally getting off the ground thanks to more than $5 million in loans and grant from national development bank Innovation Norway.

Bulandet Miljøfisk said the capital infusion will allow the firm to prepare for the first stage of construction and a three-year pilot phase that will document the aquaculture company’s technology.

Back in 2017, Bulandet Miljøfisk was awarded five land-based licenses for salmon and trout in the Askvoll municipality in Sogn og Fjordane. The funding presents a new milestone.

“The collaboration with Innovation Norway is directly triggering the realization of the project,” said Hans Haddal, chairman of Bulandet Miljøfisk. “Now we can seriously start work on the next phase.”

Bulandet Miljøfisk received help from Aksello AS in the Norwegian town of Florø, where it is affiliated as an incubator company, and from Vis Innovation at Marineholmen Bergen.

Another company, Akvahub AS in Leirvik in Sogn is responsible for design and research and development. Bulandet Miljofisk will also collaborate with the University of Bergen and NORCE Norwegian Research Centre AS during the pilot period, said Haddal. The aim is to document the environmental impact of the Bulandet model. In addition to the effect on salmon lice, the pilot will look at, among other things, semi-intensive recycling of seawater without the use of biofilter, and training of post-smolt to increase robustness especially against the increasing problems with CMS (heart failure) and other heart disorders.

Researchers will be documenting fish welfare and preparing new operation protocols employed in the new fish farming model that the project will use.
“Together with Akvahub, we will document fish welfare and prepare an operating protocol for the production of a very of robust post-smolt and food fish,” said Sigurd Handeland, amanuensis at the University of Bergen.
Print this page