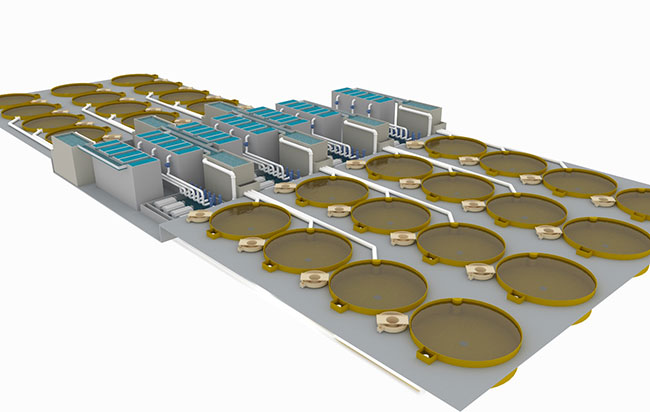 Six concept-level RAS facility designs were developed to produce 1,200, 2,400, or 3,600 tons of Atlantic salmon. Each production level included a design to accommodate six cohorts per year and a design to accommodate four cohorts per year. All designs were based on identical bio planning, which included identical fish growth at each life-stage and determining all locations and movements of fish throughout the production cycle. The concept level designs were used to develop capital cost estimates based on construction industry standard data and prices provided by aquaculture vendors.

Concept design development
Concept designs were comprised of RAS with dual-drain culture tanks, radial flow settling, microscreen filtration, fluidized sand biofiltration, cascade aeration for carbon dioxide stripping, low head oxygenation for oxygen addition, and water chilling. Additionally, ozonation was included for all grow-out systems. Bio planning for the engineering designs were based on data from The Conservation Fund’s Freshwater Institute. For example, the following feed conversion ratios were used: Fry, 0.85; smolt, 0.90; pre-grow-out, 1.0 and grow-out, 1.1. Maximum biomass density of 85 kg/m3 was used for all RAS. The overall mortality rate used was 28 percent, which included two cull events of 10 per cent each.

Each fish production scenario assumed maintenance of the following water quality conditions: total suspended solids <5 mg/L, dissolved oxygen of 100 percent saturation, total ammonia nitrogen <1.3 mg/l, dissolved carbon dioxide between 10-20 mg/l, and nitrate-nitrogen <80 mg/l. Concept designs of facilities were planned to grow market-size salmon of 4.5 kg from egg. All facilities included finishing/depuration systems. The number of tanks and RAS used for each facility design differed depending on the standing biomass and the estimated density.

Cost estimates
Standard engineering methodology was used to develop capital cost estimates for each of the six facility designs. Cost estimates have three main parts: building cost, including basic build-out, backup generator, and feed storage; RAS equipment and installation, including equipment and labor for each of the rearing stages; and additional costs, such as overhead and profit, engineering, construction management, and 10 percent contingency. Cost estimates were intended to be complete delivered project costs. The cost in dollars per kilogram of fish produced was used to compare the total cost between the different production sizes. The $/kg for all facility designs are shown on Table 1. The percentage column shows the scaling effect. The highest capital cost, 1,200 MT at four cohorts per year, is considered 100 percent and the other percentages are based off that value.

Conclusion
Results from this engineering analysis indicate that larger RAS facilities capable of producing more salmon per year and with bio plans designed to maximize tank space with a maximum number of cohorts resulted in a lower capital cost per kilogram of annual production. These results are not surprising; however, we found that scale and facility utilization affected expense items differently. For example, building costs were impacted by both scale and facility utilization, but costs for fiberglass, piping and pumps were primarily influenced by facility scale only.

Announcements for new land-based salmon farms include a range of annual production from 1,000 MT to 220,000 MT, with many at 5,000 MT. The capital cost for these projects are so large that finding savings and efficiencies is critical. This analysis indicates that designers can focus on the interplay between building and tank construction to best take advantage of economies of scale for reduced cost. Innovative solutions to maximize tank volume and minimize building size will have the greatest positive effect.

Related
Made in Maine
From lakes to land
RAS Talk: Made in Maine
Maine hosts first land-based eel aquaculture farm