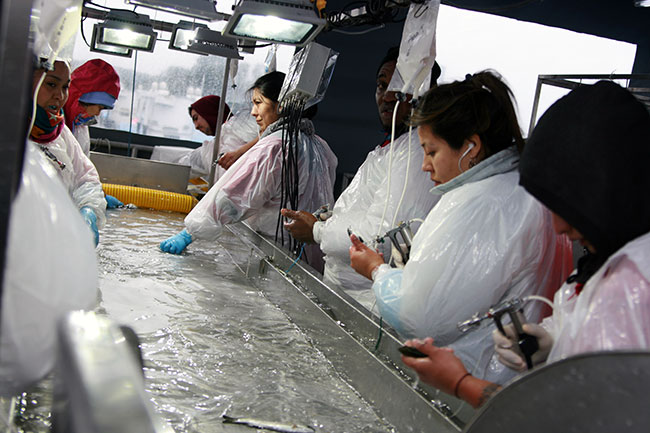 Fish at the Transference Centre Pargua are vaccinated with a pentavalent injection at 60-70g (IPN, SRS, Aeromonas, Vibrio and ISA) and with a monovalent booster against SRS prior to transferring them to sea.

Roughly one out of 10 salmon smolts produced in Chile comes from a RAS smolt farm located on the shoreline of Pargua, 60 kilometers southwest of Puerto Montt. Owned by Chile’s largest salmon producer, AquaChile’s new organization is the result of the earlier integration of four entities now owned by agro-food giant Agrosuper: Los Fiordos, AquaChile, Salmones Magallanes and Friosur.

Currently producing half of the smolts reared by the new AquaChile, the Transference Centre Pargua’s RAS facility has become a symbol of the salmon producer’s commitment toward environmental sustainability

The Transference Centre Pargua officially opened in 2015 with three tanks of 310 m3 each. It has since grown to 40 tanks, all of which are independently equipped with their own biofilters, rotofilters and degassing towers.

Production capacity
With a total capacity of about 12,400 m3, this farm represents an investment of US$16 million. It is the heart of AquaChile’s smolt production, according to production manager José Schwerter.

The water intake comes from six wells located within the premises, three of which are obtaining freshwater and the rest for saltwater. “Saltwater is not obtained directly from the sea but suctioned through these wells, being filtered naturally by sand and then, prior to entering the tanks, passes through a UV filter,” Schwerter explains, adding that 99 percent of the water is treated and recirculated.

The Transference Centre Pargua delivers smolts directly to wellboats through a system of pumps and pipes. “Perhaps, we are the only company in Chile using salmoducts to deliver smolts. We complete loading a wellboat in about two to three hours. It is very friendly with the fish, as it involves less handling. In addition, it is much cheaper,” he says.

This site employs 21 workers who help produce four batches of Atlantic salmon smolts of 150 grams every year. “Our idea is to increase that weight over time and reduce times at the sea in order to minimize environmental risks and improve production yields,” he says.

These fish are transported to different farming sites in the regions of Los Lagos and Aysén, and represent almost half of the smolts required by AquaChile every year.

“We think that having 50 percent of our smolt production in just one place is already a significant number and we also believe that it is prudent to remain in that number and not to continue growing – in this place, at least. However, we do have investment projects to build smolt farms like Pargua in other locations. 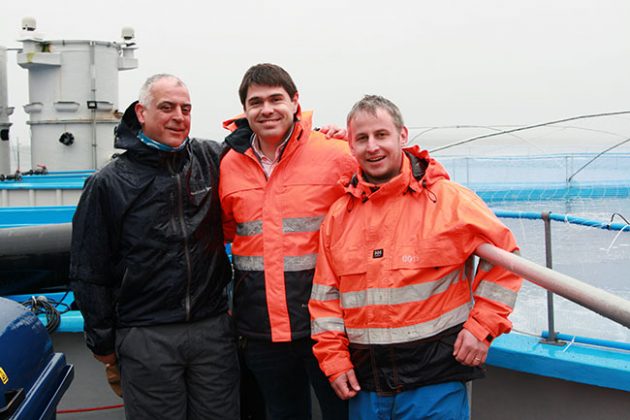 Farming strategy
As an integrated company, AquaChile implemented a freshwater model that starts with its genetics facility, which is located in Catripulli. From there, eyed-eggs are grown to fry in open-flow sites, located in Curarrehue and Melipeuco. The fish are then transferred and raised in transference centres such as Pargua.

Schwerter explains the objective of this smolt farm is to produce fish from 33 grams to 150 grams in 128 days. “In that period, we care to feed the fish and adapt them in the best possible way to the sea. For this purpose, we use freshwater and saltwater, increasing the proportion of sea water as the smolts approach their transference stage,” José Schwerter explains.

Within those 128 days, fish are also vaccinated with a pentavalent injection at 60 to 70 grams (IPN, SRS, Aeromonas, Vibrio and ISA) and with a monovalent booster against SRS prior to transferring them to ocean net pens.

“The purpose of this strategy is for the fish to reach the sea as immunized as possible, so that the accumulated thermal units of that second vaccination against SRS cover us as long as possible at the sea. Currently, the process is handmade, but in the medium term, an automatic vaccination system would be incorporated,” he says.

He stresses that the quality of the smolt is vital. “We realized that by mixing freshwater with saltwater the fish is much better prepared and adapts quickly to the sea. That is to say, the body weights and FCRs (feed conversion ratio) that we see when the smolt reaches the sea are better, for example, compared to smolts reared 100 percent in freshwater and that does not go through a transference centre like this one.

“One can also notice that those raised in Pargua have an initial feed consumption much larger than the other fish, which takes longer to adapt to the sea. That is key. Moreover, once we started our production in Pargua, the percentage of runts and laggards had a significant decline in our mix of smolts transferred to the sea,” Schwerter says.

No more lakes
In early June of this year, AquaChile general manager Sady Delgado, along with its president José Guzmán, reported that they have discontinued using lakes to produce fish. This transition required a total investment close to US$35 million in land-based systems. In a similar move, Chilean company Multiexport also announced it will stop operating in lakes by 2020.

“That is why we have invested so many resources in Pargua, plus another US$16 million, approximately, to buy 50 percent of the freshwater site Reloncaví. Additionally, we have two projects in the pipeline to replicate the Transference Centre Pargua. This is an objective related to our commitment with sustainability and the environment,” Schwerter says. Until June 2019, the Reloncaví freshwater facility was owned jointly by AquaChile and Benchmark Genetics.

He added, “Since we have a great environmental and sustainability commitment, and we work hard on certifications, for example, with the WWF (World Wildlife Fund) from the moment we were integrated as one company, we decided to leave all the lakes and rivers as soon as possible, and we did it between April and May of this year.”

Despite leaving its operations in lakes, Schwerter says the company still holds aquaculture licences in these bodies of water, but those will now be made available for use by universities or other institutions for research purposes.