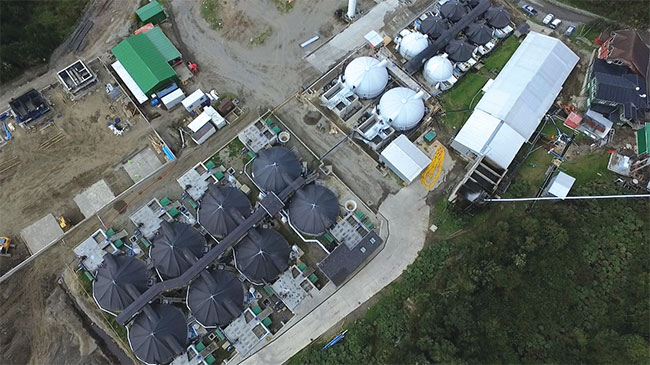 A strategic partnership between the private sector and academia is rethinking and redesigning the already existing Lago Sofía smolt farm in Chile. Circular economy is the main concept being implemented with the aid of aquaponics. This would be the first large-scale aquaponic production in the country.

Located within the urban limits of Puerto Montt, this facility is intended to rear salmon smolts for third-party companies and leafy greens for the local community, in a sustainable manner and with a low carbon footprint.

Likewise, the plan is not only to provide jobs but also to become a training and research center for both, the neighbors and the scientific world.

Smolt farm
The Lago Sofia smolt farm is a 4,400-cubic-meter facility located 12 kilometers south of downtown Puerto Montt. It has a maximum production capacity of 2,200 tons per year. That means 22 million Atlantic and Coho salmon pre-smolts (30-50 grams) and smolts (150-200 grams).

There have been several investments here in recent years and once the current expansion stage concludes, the facility is expected to reach a capacity of 8,000 cubic meters.

The water intake comes from two wells and a watershed located within the premises.

About 40 people work in this freshwater site, which originally opened in the 1980s – making it one of the oldest smolt farms in the region.

Circular economy
Circular economy is the core concept in this project; that means minimizing every waste and optimizing all resources. Through the aquaponic system, Lago Sofía plans to utilize the nutrients present in the water flowing out of the fish production system to produce leafy greens for its nearby community. The Agronomy School of the Pontifical Catholic University of Chile (UC) is a close partner in this project.

According to the chief growth officer of Lago Sofía, Miguel Portus, humidity in the sludge from the farm processes is reduced by 70 to 80 percent.

“We dehydrate the sludge to the driest possible matter. The excess water, which is the wastewater from the process, enters the roto filters again to eliminate all suspended solids that may remain. An ozone filter then clarifies and oxidizes all microparticles and solids that may have remained in the process. After all this movements and treatments, we take part of that water that should return to the environment to generate a vegetal production,” he explains.

A very important motivation is the absence of drugs or antibiotics in this facility processes, he points out.

“Additionally, all cleanings, sanitary dryings and disinfections are performed with biodegradable products that allow us to work in the most sustainable way. Besides, in all the water characterizations, samples and profiles, we have not found any relevant issues that might be telling us that the project is not viable. By contrast, we realize and convince ourselves every day more and more, that this is a nice alternative to improve the situation of the water discharges,” Portus says. 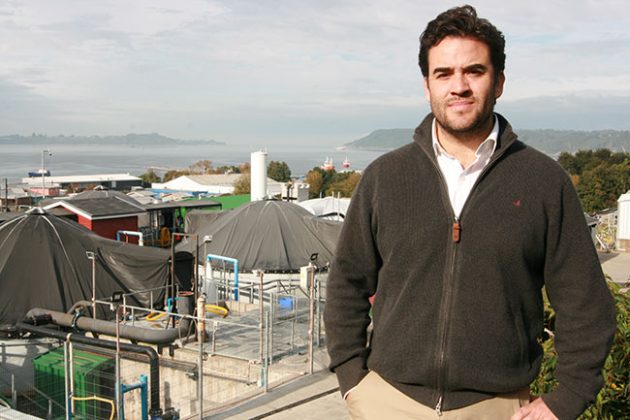 Leafy greens
The UC’s Agronomy School contributes its knowledge on aquaponics and vegetable farming. Once the production plan is completed, the farm expects to start producing leafy greens at a small scale by the end of 2019.

Francisco Albornoz and Fernando Bas, academics and researchers at the Chilean university, say the analysis performed at Lago Sofía indicates that the water obtained after the processes of sludge separation and ozone filtration are suitable for all types of fruit and vegetable cultivation. “The main nutritional contribution is phosphate,” they say.

“The production of vegetables will not be limited by the quality of the water, but by the environment that is generated inside the greenhouse,” the researchers explain. “The most critical months will be June, July and August, when daytime solar radiation and nighttime temperatures are low (winter time in the Southern Hemisphere). This will require the implementation of heating and artificial lighting equipment, which are currently being evaluated. The intention is to select those species that maximize the cost/productivity ratio.”

Both scientists expect to have the greenhouse operational within nine months. The plan is to invite different stakeholders within the community and educate them on this food production model.

“Our intention is to encourage other fish farming companies to incorporate these systems, that will allow them to generate a circular economy in their productive processes,” they say.

Community relationships, future goals
The creation of a closer link with the community of Chinquihue in Puerto Montt is one of the main objectives of everyone involved in this project. Portus is eager to see the interaction and relations that may develop between the residents of the community and those people working on this project.

“We will be able to have students from a technical high school or a community college here, who will perhaps be working side by side and exchanging opinions and experiences with people who may be doing a PhD or an undergraduate thesis at the UC,” he says.

Portus believes the freshwater production sector of the Chilean salmon aquaculture industry could potentially benefit from all the environmental, social and economic advantages of an aquaponic system, since there are no technical barriers to adoption. However, it would require willingness from those other companies.

“The only limitation is whether (they would) want to do it or not, because it means getting into another business,” he says. “Maybe this kind of project will become more attractive once there is a product, with a different added value.”

He also points out the environmental impact of such a circular food production system.

“Through urban farming, it is possible to grow vegetables in the middle of the cities, in order to produce locally, in a sustainable manner and with a carbon footprint as low as possible and at the most competitive cost,” he says, adding that aquaponics could be key for remote fish farms, since these systems can provide products that are not easily accessible, such as leafy greens, in the southern Patagonia.

Government support
Circular economy has been a primary goal of the government of President Sebastián Piñera, says Klaus Kosiel, regional delegate (Seremi) of the Chilean Environmental Ministry. Far from that goal, he sees lots of challenges in the region of Los Lagos.

“In this region we have big problems with the waste of our productive and domiciliary processes. There are problems about where to dispose them, we have the inland sea of the Chiloé island with many sectors contaminated with plastic waste, buoys, pens, etc.,” he says.

He believes the concept of circular economy is already gaining traction in the world, although recognizes that it is still avant-garde.

“France, for example, traced its road map to the circular economy in 2017. In that sense, Chile wants to be a pioneer in South America and stop talking about waste and garbage, to refer to raw materials. Here, several elements enter the scene, such as the Law of Extended Responsibility of the Producer and Promotion to Recycling, which require the recovery and valuation of priority elements (batteries, tires, packaging, boxing, etc.) with goals of up to 10 years,” he explains.

Finally, when referring to the environmental performance of the aquaculture industry in Chile, he acknowledges there is still so much to do.

“It has a fairly large historical debt in terms of sustainability, but it is evident that they have made progress in implementing sustainable measures.

“Lago Sofía is a good example, since they are reducing impacts on the environment while contributing with production of vegetables in the process,” he says.