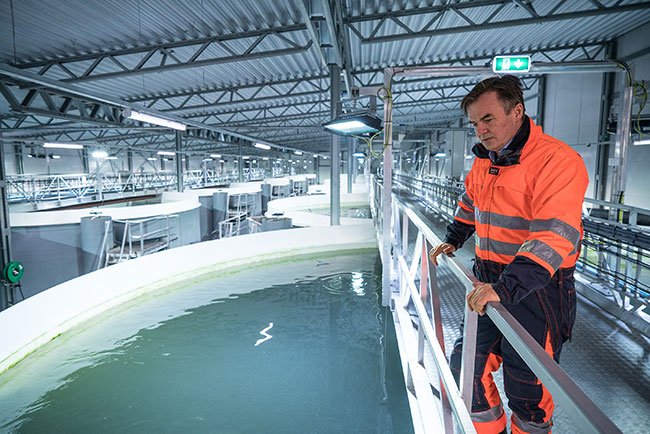 Recirculating aquaculture systems (RAS) have been developing for many years and the extent of their adoption has been growing progressively, particularly in the hatchery phase. RAS can play a significant part toward the production of healthier fish in an ideal environment.

In traditional salmon farming, RAS is a valuable technology at the start of the fish’s lifecycle, when fry are kept in land-based tanks until they reach smolt stage (80 – 100g) before moving them to open net pens to grow to harvest weight of 4 to 5 kg.

There is a growing trend in the salmon farming industry to keep smolts in land-based tanks for a longer period of time, to decrease grow-out time in the ocean and reduce biological exposure. This can also cut the risk of parasites and disease, reduce the possibility of exposure to micro plastics, algal blooms and predators, and address issues such as escapes and untreated fish waste. It can also positively affect the valuation of companies, with less biological risk, predictable results and more stable production.

Getting started
One organization that’s moving in this direction is CtrlAQUA, or Control in Aquaculture Production, a center for research-based innovation that was established in 2015 by the Research Council of Norway. Its focus is on the first seawater phase, or so-called post-smolt stage, the most sensitive phase for salmon in the production cycle.

“RAS is a growing production technology for aquaculture because it uses very little water compared to traditional flow-through systems,” said Åsa Espmark, senior scientist at Nofima and director of CtrlAQUA. “It allows for more controlled water quality and makes aquaculture possible in places where access to water is limited.”

According to Espmark, the attention toward the development of RAS science and technology has increased. This is because there are multiple things to consider in such systems, such as biofilters required for cleaning the water, issues with salt/brackish water in the systems, and the differences in water quality requirements compared to flow through systems, he said.

CtrlAQUA’s research is carried out in the center’s Sunndalsøra RAS facility, which is home to 0.9m3, 3.3m3 and 107m3 tanks with a total rearing capacity of 1,100m3. Oxygen, pH, redox, water level, flow and temperature are monitored automatically, while 98 per cent of sludge generated is collected directly from the tanks and later in the loop by belt filters. Commercial feed (pellets) are given with belt feeders or spreaders in the facility’s largest tanks. All tanks are cleaned mechanically and chemically, with the majority of farmers using peroxide-based disinfectants.

CtrlAQUA’s researchers focus on producing salmon up to 1 kg. Hans Bjelland, research manager at SINTEF Ocean AS in Trondheim, Norway, is supporting their work.

“If we can let salmon grow big on land before they’re transferred to sea, we can reduce the time spent at sea, from 16 to 18 months, to 10 months, which means we can also avoid the two most severe winter months,” Bjelland said. “Every third salmon that escapes does so during bad weather, and bad weather is more prevalent in winter.

Growing salmon on land before they reach a weight of 1 kg can significantly strengthen the fish’s robustness, health and well-being, according to Espmark.

“The main idea with post-smolt RAS facilities is that the longer you keep the fish on land, the less time you are exposing them to sea lice and the less risk there is of escapes at sea. With RAS, it’s possible to produce robust smolts because you can monitor and adjust water quality parameters to better control production,” she said.

Another benefit is the ability to capture and potentially recycle any nutrients contained in the sludge from tanks.

“However, it is difficult to conclude which is more financially viable: full grow-out or post-smolt,” she said. “Logically, it’s more expensive to keep the fish on land anyway, mainly due to energy costs. The cheapest, but unfortunately not the most sustainable, is to put the fish in open net pens.” 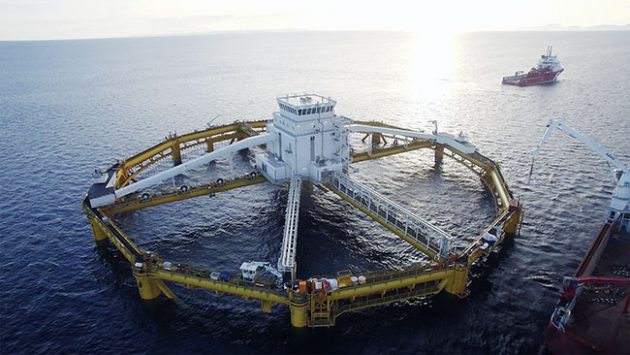 Growing salmon bigger on land lessens their time on sea and reduces the risks associated with open net pens.

Post-smolt potential
Jacob Bregnballe, sales director of AKVA Group in Denmark, and Jesper Lund, senior sales manager of Aquatec Solutions, a wholly owned subsidiary of AKVA Group, are firm believers in the potential of post-smolt applications in RAS. In 2017, Aquatec Solutions signed a contract with Tytlandsvik Aqua to build a new post-smolt facility in the Hjelmeland municipality of Rogaland, with an overall tank volume in excess of 15,000m3. Aquaculture giants Grieg Seafood, Bremnes Seashore and Vest Havbruk then became part of the effort, and the new facility opened its doors in June 2019, capable of producing 3,000 tons of post-smolt each year for delivery to fish farms.

Hopes are high that the facility will raise harvest volumes of up to 100,000 tons in 2020, with the goal of better fish welfare and survival, lower environmental footprint per kilo, and lower costs.

“The facility has been designed with our unique Zero Water Change technology,” Lund said in 2017 when the project was launched. “In addition to more traditional recycling technology, further steps are included in water treatment that removes nitrate and phosphorous from the water. The greatest benefit of our technology is that it allows for full sterilization of the raw water that’s added to the facility. Today, a smolt facility manages enormous values, and it’s extremely important that we do everything in our power to maintain biosecurity.”

Extensive trials on the production of large, seawater-adapted smolts by AKVA Group customers have yielded promising results. According to AKVA Group, some trials have shown that land-based production of post-smolts in recycled seawater leads to less infection by sea lice, lower mortality and faster growth. The company is now hopeful that there will be further opportunities to optimise post-smolt production on land.

“Pre-ongrowing of fish in recirculation systems to reach larger sizes before releasing them into sea cages is a way of increasing profitability,” said Bregnballe. “Smolts are typically 100g today when released in cages. Increasing this figure, for example to 300g, will improve health and growth rates significantly, until harvest at market size of typically 4 to 5 kgs.”

The main point, he said, is that small fish grow faster than large fish. They gain more weight over the same period of time than larger fish, and convert feed at a better rate.

“Growing faster and utilising feed more efficiently will lower production costs when calculated per kilo of fish produced. Post-smolt applications in RAS pay off because you can keep the optimal temperature at 14°C, the fish will grow by 2 to 3 per cent per day, and you›ll maximize production time-wise.

“Not all fish produced can be small fish, so the potential for growing them is limited. But when discussing what to produce in RAS, the answer is small fish. It makes sense to invest money in that.