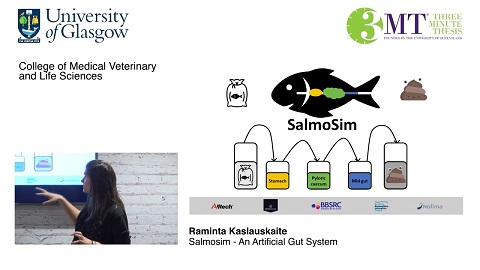 A team of researchers from the University of Glasgow has been working on an experimental artificial fish gut system. Called SalmoSim, the system simulates the workings of a salmon’s digestive tract.

Led by scientists at the University of Glasgow, the three-year project, which began in 2016, also includes researchers from  The Marine Institute and University College Cork (Ireland), Nofima (Norway), Alltech and Marine Harvest.

The system “represents a powerful tool for carrying out basic and applied research into fish digestion,” according to Dr. Martin Llewellyn, from the University of Glasgow’s School of Life Sciences.

SalmoSim researchers want to do away with food trials.

Gut microbiota is a bacteria that colonize the intestine. They play a vital role in digestion and the absorption of nutrients.

The SalmoSim project aims to understand how gut microbiota aids the absorption of feeds and the development of salmon.

At the recent Aquaculture Europe 2019 conference in Berlin, Raminta Kazlauskaite, a member of the research team, explained that feed trials cost the salmon farming sector about US$14.4 billion annually. A feed trial for a single feed additive could cost approximately $191,000.

Feed trials also take as much as six months long as researchers need to wait for a salmon to grow in size.