As a world leader in salmon production, Chile has devised a national plan that gives RAS a decisive role. 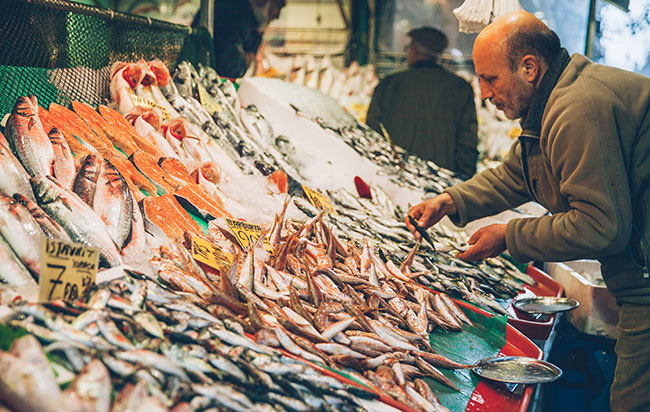 Recirculating aquaculutre systems technology is at the centre of Chile’s research and development programs to grow its economy. Photo: getty images/ Chalffy

For the past 15 years, the Chilean government has supported the research and development of five aquaculture species. Its aim is to close their life cycles, solve technological barriers and scale-up production.

Chile leads as the second largest producer and exporter of salmon in the world. According to the Chilean Salmon Council, it has exported US$5.2 billion in salmon exports last year. The country’s salmon industry continues to grow strong, but it hadn’t always been the case.

In 2009, a couple of years after the ISA virus decimated most Chilean salmon farms, the government decided not to rely on salmon and mussels as Chile’s only farmed fish species at large-scale.

About US$35 million has been invested towards the country’s aquaculture diversification. Though the first two programs have since cancelled, the rest have reached significant progress and are currently in their final stages.

Yellowtail kingfish is achieving more progress, probably because that is the most valuable species in the market. However, corvina and Red kingclip seem poised to scale up and became development poles for the country’s economy.

As the country looks to expand its market to produce other species, recirculating aquaculture could be the key to expanding its seafood and aquaculture industry.

Corvina
Fundación Chile is one of the main business incubators and pioneers of salmon farming in Chile. It is also behind the country’s corvina project in which fish are being reared until juveniles in its Aquaculture Centre Tongoy (CAT), located about 460 kilometres north from the capitol city of Santiago.

Franco Cerda, director at CAT, explains that without recirculating aquaculture systems (RAS) technology, they could not have achieved any progress on the project.

“With the current access limitations to new aquaculture licenses, we could not have done any of this. Besides, RAS technologies have allowed us to increase our production densities while maintaining stable farming conditions,” he said.

At the beginning of the project, only bio-blocks were used at the CAT facility. Subsequently, moving bed biofilters were also integrated due to their low demand of required land, according to Cerda.

Recirculation is used in all corvina’s productive stages, from conditioning of breeders to land-based grow-out. The grow-out stage occurs in sea cages some 1,300 kilometres further north, nearby the city of Iquique. The land-based plant has a nominal capacity to produce about eight tonnes per year. The seawater site has a capacity to produce 35 tonnes per year, but it is expected to increase up to 165 tonnes in early 2023.

“The main benefit of this technology is its high degree of environmental control with low impact on the environment, especially when it comes to the temperature requirements of this species,” he said.

The RAS technology used in the CAT is of their own manufacturing.

The corvina program is finishing the phase of closing technological gaps and starting to explore the commercial scale-up of the species.

“This program not only seeks to validate technology for sustainable corvina farming, but it also seeks to contribute to the creation of an industry, through the development of responsible aquaculture, while expanding the productive ecosystem in the northern Chilean regions and contributing with jobs and quality life for the surrounding communities,” Cerda said. 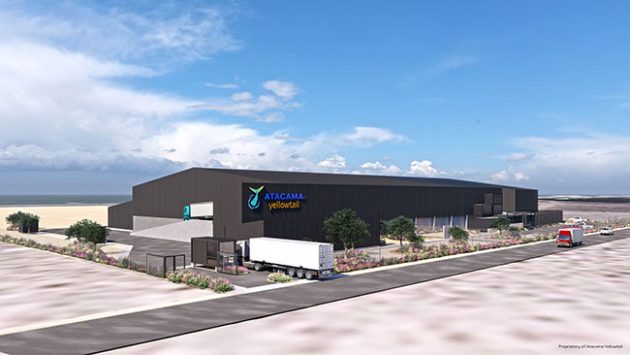 Atacama Yellowtail is a new RAS project that is looking to produce 900 tonnes of Yellowtail kingfish per year at its first stage. Photo: aquamaof aquaculture technologies

Yellowtail kingfish
Located close to the city of Caldera, about 870 kilometres north from Santiago, Acuinor is the first Chilean company behind a land-based farming project of yellowtail kingfish. Funded in 2006, the firm expects to produce around 19 tonnes of harvested biomass this year and increase those numbers up to 200 tonnes by 2023, after the construction of a new grow-out facility.

Muriel Teixido, commercial and projects manager at Acuinor, reveals that their complete production cycle is performed on land  –  from breeders, weaning, pre-fattening and even grow-out using their own RAS.

“The benefits are many, including savings of water, temperature, and chemicals, mainly related to basification for pH control. RAS also keeps the system much less exposed to external environmental factors and achieves total control of all parameters, providing greater stability to the whole system,” she said.

Teixido believes that her company could have theoretically farmed this species without RAS, in sea cages. However, under a very different production model.

“In Chile, mainly in winter, there are low temperatures. Therefore, growth during the months of May to September would have been very low while the production cycle could have been extended from 16 to about 24 months, which would have required larger cages and land-based facilities to stock fish continuously every year,” she said.

Regarding the success achieved so far by the company, Teixido thinks this is mainly due to three factors: “It is a docile species, easy to handle and usually living in schools from its earliest stage until grow-out, so can be kept at high densities. It is a fast-growing species, so it is profitable to produce them under RAS. And it is a species with a good feed conversion rate and which eats in the entire water column. In short, it is a docile fish, easy to handle and resistant to stress,” she said.

AquaMaof Aquaculture Technologies is specialized in land-based RAS technology. It is currently supporting a Yellowtail kingfish project for the company, Atacama Yellowtail. In its first stage, the goal is to produce 900 tonnes of fish per year.

Roberto Tishler, director of sales at AquaMaof, explains that RAS is probably the most sustainable and successful way to grow Yellowtail kingfish.

“With the correct RAS design and implementation, farmers can handle all the variables to provide and maintain the required optimal conditions (temperature, pH, salinity, photoperiod, etc.) to ensure an optimal growth environment for the fish,” he said.

“With a completely controlled system and strict biosecurity protocols, our RAS technology delivers a traceable, nutritious, antibiotic-free, fresh, and delicious fish, from farm to market, with the shortest supply chain. This mitigates risks and ensures constant production and premium product, leading to the desired return on investment.”

AquaMaof is working with Innosea, its local agents and partners in Chile, looking to identify relevant stakeholders, including potential feed suppliers. “Chile is home to major suppliers with experience in different marine species, and they are on board with us in the project,” he said.

Red kingclip
Located nearby the city of Coquimbo, about 460 kilometres north from Santiago, the company Colorado Chile produces Red kingclip in its seawater land-based facility. The project uses moving bed biofilters in all pre-juvenile stages. This firm uses its own RAS designs while receiving technical support from NIVA Norway and NIVA Chile, Aquamiks Italy and Vehice Chile.

The general manager at Colorado Chile, Piero Magnolfi comments that RAS is mainly used to rear a fish more suitable for the pre-fattening/grow-out stage and with the maximum potential to successfully face stages of frequent handlings.

“Among other things, RAS allows the organism to function better in its ontogenic development, without any need for antibiotics while enhancing beneficial bacterial flora for its better nutritional and enzymatic condition. This also translates into substantial improvements in water quality and survival rate,” he said.

He believes Red kingclip manages very well in RAS modules at the first life stages due to its relatively low O2 requirements, reduced release of nitrogen waste and CO2, and high ability to adapt to high farming densities.

Magnolfi thinks that those life stages could have been reared without RAS, but at a very high and unstable cost, quality and risk. Pre-fattening and grow-out stages are performed in raceway systems with water reuse until harvest.

At this moment, this Red kingclip project is starting to scale up its production.

“We are currently doing a grow-out pilot that represents the design and size to be replicated when commercial scaling,” said Magnolfi.

This industrial pilot looks to harvest 20 tonnes in 2023, with fish weighing between 1.5 to 2.2 kilograms. This product would be used to carry out a market study in the domestic market.

“Meanwhile, the investment and commercial strategies are being evaluated to bring this model to a production of 1,000 tonnes per year, with projections of growth as the market allows it and safeguarding sustainability aspects as a priority,” he said.