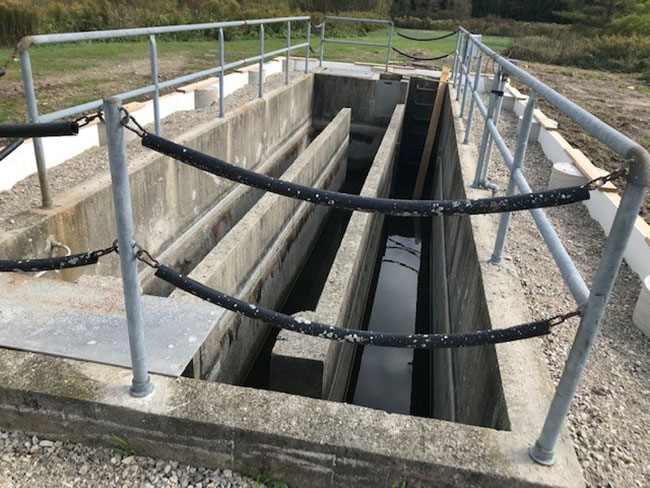 First established in 1993, the OARC installed its first RAS in 2003 to support the industry’s interest in RAS. Photos: Ron HIll

More recirculating aquaculture system (RAS) research is in the works for the Ontario Aquaculture Research Centre (OARC) as it begins construction on its new laboratory in Alma, Ont. in Canada.

Previously known as the Alma Research Centre, the OARC was established in 1993 to assist the commercial fish farming industry in Ontario. Research focuses on culture methods, fish health and welfare, behaviour, nutrition, growth, reproduction, and genetics.

OARC also provides courses and training programs at the station for both industry and educational institutions by running workshops as well as technology and husbandry demonstrations.

But as the industry evolves, Station Manager Marcia Chiasson says, so must the OARC. The new system will provide increased RAS research capacity and add flexibility to research solutions.

“The original building was built to 2003 standards for research facilities and quarantine facilities for imported species,” says Chiasson.

“We invited the Canadian Food Inspection Agency (CFIA) for a mock audit of our quarantine facility, and they found several shortfalls in the facility. These shortfalls come from higher standards for biosecurity and containment that have developed since the original build in 2003.”

Currently, the facility has a total six buildings and more than 400 fish-rearing units across seven wet labs which allow research on a wide range of projects at one time and allows researchers to incorporate any life stage from egg to broodstock.

Drawing water from deep wells in the aquifer, OARC was designed as a flow-through facility with large capacity and consistent temperature. With increased demand within the aquaculture industry and RAS facilities starting to appear, the first RAS system was installed at the OARC in 2003 to support the rising interest in RAS.

The new building will be reconfigured for increased biosecurity, including a new entrance with controlled traffic flow to the labs, disinfection stations as well as the addition of designated, isolated areas for feed storage and mortalities.

Changing standards
The Ontario aquaculture industry consists of small to mid-sized farms which are privately, or family-owned. These farms generally lack the research budgets needed to perform significant research and development at their own farms. As well, few farms have the rearing capacity to switch a portion of their production from what is generating revenue, to research and development without sacrificing their bottom line.

OARC partners with Ontario farms to makeup this shortfall and support growth. OARC projects provide rearing space and research options to Ontario fish producers that would otherwise be out of reach.

As well as reconfiguring to meet the new standards for fish welfare, OARC is rebuilding the RAS lab components in improved fashion for better operation and flexibility.

Instead of one system, OARC is installing three systems each within their own lab, all within the original footprint. Each of the three labs will be equipped with new sumps, drum filters, CO2 strippers, low-head oxygenators, moving bed biofilters, and UV disinfection units.

“We also needed to increase the amount of feed the RAS can handle and digest,” Chiasson adds. “Previously, what we could do in the quarantine labs was running up against the limits of the filtration and biofiltrations systems. Often, we had to add makeup water to improve the water quality as we increased feed rations. The new systems will be able to handle much more food without fouling the filtration system or overwhelming the biofilter.”

The construction is being funded by the Ontario Ministry of Agriculture, Food and Rural Affairs (OMAFRA) and the new design provided by the engineer firm Canadian Aquaculture Systems.

Each lab is equipped with a chiller and boiler to allow for a wide range of temperatures. The current RAS lacks the ability to chill the water to low temperatures. Temperatures in the RAS were lowered by controlling the amount of makeup water entering the system, but that method was limited by the well water temperature of 8 C to 9o C.

“The new system using chillers and an all-new filtration system should cut water usage by 80 to 90 per cent and significantly lower our energy cost, while increasing our range of possible operating temperatures,” Chiasson says.

The labs are designed with reconfiguring in mind. Rather than choosing to build the RAS labs in a permanent fashion, making choices of which lab will house what sized tanks or be setup for certain fish sizes or life stages, the rearing space for each lab is designed to be plug and play for the best flexibility based on the needs of the project.

Tanks can be switched in and out by technicians without demolition allowing the RAS lab to be configured specifically to the species and the research being performed.

“We may have circular tanks, troughs or raceways put into the labs as needed. The volume and capacity of each room will be determined based on the species, body size and type of experiment we are intending to run and can be configured as needed by research needs,” says Chiasson. “This flexibility, plus the ability to run different research in each lab vastly improves the RAS research capabilities of the station. 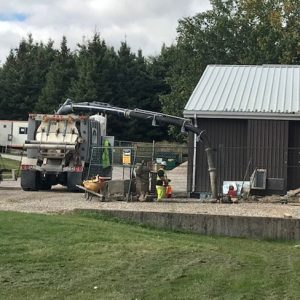 Construction of the new building is fundedby the Ontario Ministry of Agriculture, Food and Rural Affairs. 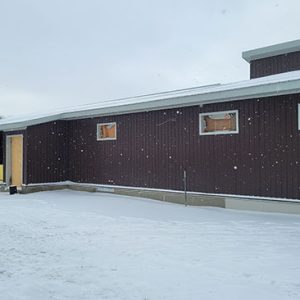 Each lab will be equipped with a chiller and boiler, allowing for a wide range of temperatures, which is something the current RAS, lacks. Photo: Ontario Aquaculture Research Centre

Upgrades for Arctic char
As well as providing a greater temperature range for research and rearing, the chillers are also a response to a challenge at the station. The station maintains its own stock of Arctic char (Salvelinus alpinus) which are held and bred each year.

“The station is having some issues with our arctic char as the eggs develop,” explains Chiasson. “We are seeing poor fertilization in what seem like viable eggs. We suspect the maturing brood are not being held at low enough temperature but need to explore this hypothesis through research. Despite being held in our coolest water (8 C to 9o C) it is not as cool as the natural water our char originate from in their native waters of Labrador.”

The eggs are developing within the female at 8 C to 9o C, OARC incubates the eggs at 4 C to 5o C temperature in a separate chilled incubation system, so it is suspected brood rearing conditions may be a factor affecting fertilization. The new RAS units will allow temperature control for a subset of char brood that can be used to investigate the issue and explore the effects of brood temperature on char fertilization.

Better discharge management
The new RAS will decrease effluent discharge from the RAS system but the effluent system itself is being redone and improved.

OARC runs a chlorine disinfection system on its RAS effluent discharge line which is being retrofitted. A purge system will direct wastewater to the drain from the RAS labs. Drains flow into the chlorine contact chambers where chlorine treatment is applied. Next, effluent flows through the contact chambers to the de-chlorination unit before it is discharged into the facility’s man-made wetland.

The design is being improved to work with the new RAS and provide adequate disinfection for the new effluent conditions. The original chlorine contact chamber is open to the air to allow the chlorine to gas off. Local birds and animals could land in the contact chamber and become contaminated with chlorinated water, thus, the new contact chambers are to be enclosed to protect local wildlife.

New opportunities
“Demand for our RAS research space is always high, and the new labs will allow us to increase our RAS research capacity. We are receiving a lot of interest from our industry partners for the new space,” Chiasson comments. “We may have a backlog of projects when we first come online.”

As well as new projects, the new RAS will facilitate the ongoing lake whitefish (Coregonus clupeaformis) performance and husbandry initiative run in conjunction with Department of Fisheries and Ocean Canada which looks to evaluate the species for commercial culture.

Ontario farmers are looking to import several new species for potential culture including foreign domesticated strains of rainbow trout (Oncorhynchus mykiss) and jade perch (Scortum barcoo) that would require quarantine facilities as well as support from the facility.

Construction on the new RAS started in September 2021 and is projected to be complete in fall 2022. Challenges with COVID-19 and subsequent supply chain issues should not significantly delay the project. With the RAS sector picking up speed, OARC is well poised to provide meaningful research opportunities and improve growth in the Ontario RAS industry.