Salmones Austral is producing 280-gram juveniles of Atlantic salmon in a new facility.

With an investment of about US$35 million, the facility aims at higher efficiency and reduced risks, allowing a better use of the company’s aquaculture licenses with a lower exposure to fish diseases usually present at the sea.

The facility
This land-based site was built in Llaguepe, about 70 kilometres away from Puerto Montt, between mid-2020 and February 2022, next to an estuary historically linked to salmon production in Chile.

Designed to rear Atlantic salmon from 40-gram fry to 280-gram post-smolt, this RAS unit is located on the southeastern shore of the Reloncaví estuary, a body of water to which four rivers and a hydroelectric power plant flow, and which is characterized by a higher temperature surface layer (>11 C), low salinity (< 25 ppt) and high oxygen concentration. In this way, the farm can obtain both fresh and brackish water from deep wells located within the premises, which allow them to only require UV filters in the inlet water.

Temperature and salinity differ between the three rooms, looking to progressively resemble the natural conditions that fish will encounter at the sea (14 C and 5 ppt in winter, 13 C and 14 ppt in summer, and 12 C and 26 ppt in post smolt). The winter system has eight 275m3 tanks, while the summer one has eight 500m3 tanks, and post smolt has six 1,250m3 tanks, making this the largest RAS unit in Chile. 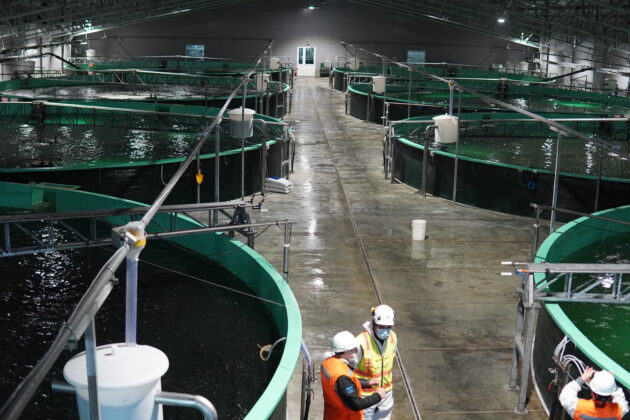 The objectives
According to the Freshwater assistant manager at Salmones Austral, Nelson León, the main purposes of this facility are to reduce the time exposure of fish to the risks involved by farming at the sea (diseases, low oxygen concentrations, algae blooms, etc.) and to produce a robust fish better adapted to the fattening conditions. “These fish are already eating by the following day after transference to the sea, something that does not occur when transporting fish from freshwater smolt farms to sea water,” he said.

With eight batches per year, the facility is expected to annually produce around 2,100 tonnes of fish. The third batch was the first one to complete the entire cycle throughout the tree RAS by mid-August. “Those fish should be harvested between Q2 and Q3 2023, when we will continue the performance evaluation at our processing plant,” he added.

Regarding the reception of fry and dispatch of smolts, Nelson León explained that “the fry arrive by truck, while the smolt are dispatched via a salmoduct, directly to the well boat, after having been graded, vaccinated and counted”.

Special characteristics
Automation and low water consumption are some of the main features of this farm. For example, the entire site requires a renewal of 88 litres of water per second within the 13,700 m3 that are 99 per cent recirculated in the different systems.

Automatic backwash of biological filters in each of the systems is another special characteristic, which helps reduce human operational errors from occurring. Likewise, the site has centralized temperature control, food distribution, water intake, water levels in the tanks, lime preparation and distribution, and water flow, which shuts off in the event of electric power cuts.

“Our heat interchangers are also very important, since they allow us to regulate temperature with a 35 per cent lower consumption compared to conventional systems,” said the freshwater assistant manager of Salmones Austral.

Following stages
Regarding the future for this facility, the company’s plans include building up all the rooms for those production stages up to 40 grams, starting from eyed eggs. Likewise, Salmones Austral expects to gather enough knowledge and experience while operating this unit to increase the average weighing of post-smolt up to 500 grams.

Chile concentrated most of the RAS facilities for salmon production worldwide until the country was affected with ISA virus in the year 2007. As liquidity scarce in most companies due to the massive outbreak big investments were reduced, and the local industry lost some ground as leader in the development of land-based RAS farms. Now, Salmones Austral has broken this tendency and joins the global trend of increasing the stocking weight of these fish.