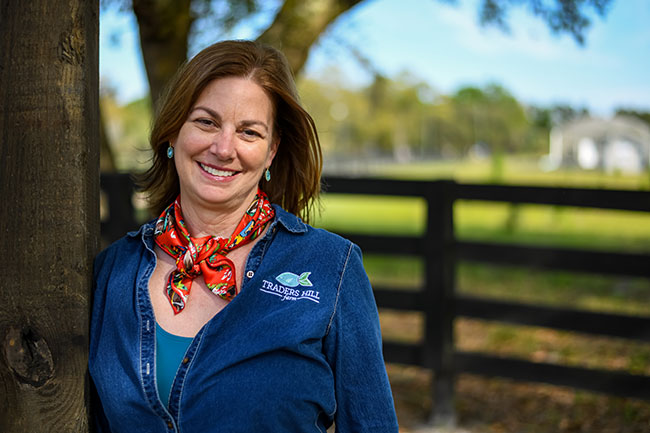 Recirculating aquaculture is complicated enough without the added technology of a hydroponics system.

That was the initial reaction of Brian Vinci’s professors when he first encountered the idea of aquaponics while he was studying aquaculture engineering in graduate school. Today, Vinci is director of the Freshwater Institute and co-host of RAStech Magazine’s podcast for recirculating aquaculture professionals.

In this latest episode of RAS Talk, Vinci sits down with someone who is thriving at both technologies. Tracy Nazzaro, principal and president of Traders Hill Farm in Florida, shares her expertise in running a sustainable aquaponics agribusiness.

RAS Talk: Tracy, let’s start by having you tell the Traders Hill Farms story; how it started, its production and just the overall marketing of the product.

Tracy Nazzaro: So our mission at Traders Hill Farm is to help people live their best lives by providing access to locally and sustainably grown food. We launched commercial operations in 2015 with a small aquaponics greenhouse system. It has a plant capacity of 20,000 plants a month, so it produces about 5,000 pounds a month of leafy greens… In 2017, we opened this larger facility, which today produces about 25,000 pounds of leafy greens, across the whole facility, a month.

So I have three different aquaponics systems that power of this hydroponic growing operation, we have about 3,000 (tilapia) fish that power that… I would say your professors were absolutely right, in terms of the ratio of what is required for your fish operation and your hydroponic growing operation. That was one of the lessons I would say we learned the hard way… I would say initially, we were way over built, we probably could have powered another six or seven acres of greenhouses with what we had built.

RAS Talk: Tracy, when I was doing my research for this episode, I noticed that Traders Hill has achieved various certifications, including the Safe Quality Food (SQF) status. Could you describe SQF?

Nazzaro: The SQF is part of the Global Food Safety Initiative (GFSI) food safety scheme. So, it’s part of your Global Gap and it is a very rigorous food safety scheme. But for us and where we want to be and our plans, it was really important for us right out of the gate.

So, the SQF Food Safety Scheme is a very comprehensive food safety plan. It’s written and developed specifically for our farm… But our team loves it. That’s our number one core value, which is to live safety. So we live that we are very mindful that we are selling food to the public, so the food safety is very important to us.

RAS Talk: You’ve got a lot of things going on there, both on the fish side and on the hydroponic side. Can you say what your biggest challenges are in operating that system?

Nazzaro: So I would say it’s continually managing that mass balance. So there’s the balance of the weight of the fish, how much they’re being fed versus the cubic feet of the of the coldest media, and what is that that nutrient output. And it’s not like a crockpot where you just set it and forget it because things change.

Tilapia, don’t love the cold weather, it doesn’t hurt them, but they don’t eat as well in the cold weather. If they’re not eating as well, they’re not eliminating as well. And that changes my nutrient outputs… Anytime you have anything living in your system, whether it’s your fish, your beneficial bacteria, or your plants, you’ve got to really manage those oxygen levels. And the fish are the Achilles’ heel.

We live in Florida, we have hurricanes so we have a hurricane plan in place. We have generators on both of our buildings. And then for hurricanes, we actually have backup generators for our generators, because we have found if our fish lose oxygen for one hour, that’s where the stress points begin. If we lose power for one hour, both the younger fish and the older fish get really stressed out and after four hours, you’d lose a whole population. So, you really need to be mindful of making sure that all your equipment’s working.

RAS Talk: How do you see the aquaponics industry landscape in the US and how does Traders Hill Farm fit in?

Nazzaro: Aquaponics, which used to be people thought of it as a hobby business or it’s something really kitschy that you had at your school or in the basement of your university, is now going to be much more commercial. And it’s much more exciting. So I think it’s going play a bigger role in in in the in the food production landscape.

I really like aquaponics. I will admit, there have been times when I’ve wanted to throw in the towel and just go straight hydroponics and nix the fish. However, when you are looking at the cost of fertilizers and inputs that are skyrocketing, it makes my fish look really appealing. And I think just the sustainability aspect of it. If we can get a movement, and get interns, and get people interested in it to keep progressing this on a commercial level, you’ll start to see more of it and it’s pretty exciting.