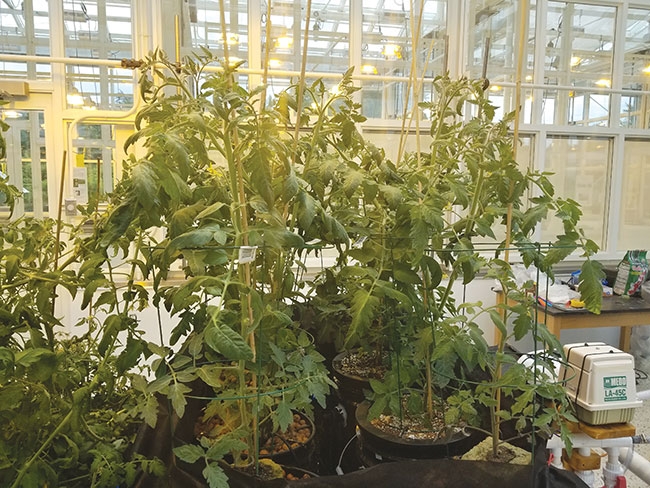 Despite its roots as the common carp, Cyprinus carpio, and all that fish means in aquaculture, the koi is not a food fish and is outside the scope of mainstream aquaculture. In recent years however, the koi has become associated with recirculating aquaculture systems (RAS). With the rise of aquaponics, the raising of fish in a RAS providing nutrients to a hydroponic system, some producers are choosing to fuel their plants with koi instead of crop fish like tilapia (Oreochromis spp.) Koi provides the aquaponic producer with many of the benefits of aquaponics while focusing their entire effort on plant production.

This concept of aquaponics, without using the fish as a cash crop, seems blasphemous to the commercial fish farmer. The mind rebels at the thought of “leaving money on the table” by not having a crop fish. The use of koi does, however, offer significant advantages to the aquaponic farmer, especially in terms of managing their RAS system. Unlike aquaculture, aquaponics is a plant-based business. For aquaponic businesses, koi are the optimum fish to balance a RAS system for plant growing and have been increasingly embraced by larger scale aquaponic ventures.

The mighty koi
The choice of koi offers many advantages. Koi are tough. They are easy to care for and can take lower dissolved oxygen levels than most cultured species. Unlike tilapia, koi can thrive at low temperatures as well as high greenhouse temperatures. Koi are well-explored and well-researched – information and culture methods are known. Koi are easy to acquire and easy to propagate. Since the value of some individual prize koi can be thousands of dollars, fish health issues are well-explored and disease treatments readily available without a veterinarian prescription.

Cannabis pairing
By choosing koi for an aquaponic RAS system, one has changed the nature of the role of fish in the operation. Koi for your RAS eliminates a lot of husbandry and planning for your fish. The footprint needed for fish rearing and labour are both greatly decreased. There is less need for splitting fish, weight sampling, shipping, receiving and breeding with koi. Additionally, koi are less likely to breed within the RAS system. There is no production schedule for the fish, only a schedule for the plants. Without harvesting large numbers of fish, the RAS system can be maintained and balanced much easier and much more efficiently. When fish are harvested, a RAS system’s biofilter can suddenly starve and nutrient production for the plants may fall. The harvest schedule must be closely matched to plant needs to keep from a nutrient shortfall. Without harvesting, the RAS system gets a steady supply of nutrients from the koi. Koi can be removed and sold off to local stores in small groups as target density is reached.

Russell Easy is an associate professor at Acadia University in Wolfville, N.S., Canada. He is also the aquaponics and research advisor at Aqualitas, a Canadian medical cannabis producer. Aqualitas produces medical cannabis with a state-of-the-art aquaponic RAS. The intent is to grow several strains of high-quality cannabis products from nutrients supplied by the koi.

“There are many advantages to using koi,” Easy says. “One of the biggest is not having to heat the water for the koi as they can thrive at temperatures lower than that required for other fish species such as tilapia. This obviously saves on heating costs and allows us to provide the optimum water temperature to the cannabis.”

Aqualitas developed its technology in conjunction with Acadia and Dalhousie universities, and research continues at Aqualitas.

“The business is focused entirely on the plants and the koi themselves are considered part of the system,” Easy explains.

Essentially, the fish are treated the same as the biofilter – a living part of the RAS. The high value of cannabis as a product is a large competitive advantage over a company that produces vegetables and provides enough income to make the company profitable without a crop fish. The high value of cannabis also provides for large investments in research into RAS technology.

“Much of our research focus is on feed composition, nutrient outflow and diet,” Easy explains. “We are trying to optimize the composition of the fish feed input to get the best results for our plants.”

By manipulating the feed ingredients, Aqualitas can change the nutrient ratios and trace elements produced in the RAS. With the legalization of cannabis in Canada, Aquaponic RAS operators are poised to drive much of the RAS technology research in the future.

Ideal for start-ups
Because koi are an ornamental fish and are not sold for food, layers of bureaucracy, licensing and regulation immediately disappear. For Todd Croxall of Croxall Farms in Huntsville, Ont., Canada, choosing koi gave his aquaponic business a head start. While waiting for his aquaculture license, Croxall Farms began running koi in their aquaponic RAS. This choice allowed the company to set up their aquaponic business and start operating immediately instead of being caught in the bureaucracy. They focused on establishing the green side of the business, developing the RAS system and working out the usual start-up bugs and troubles involved.

“Choosing koi gave us a big head start,” Croxall says. “Going into the venture we didn’t realize how long it would take to get all the aquaculture licensing in place. Koi were available and affordable and allowed us to begin getting our main product to market in the shortest time. The koi have given us a very stable RAS and our plants are thriving.”

Value of koi
An overlooked benefit of keeping koi in an RAS system is that the koi themselves do have value, and that value can be very high. Koi can sell for thousands of dollars depending on the colour and pattern. The most valuable koi come with pedigree tracing their lineage. For the commercial producer, juvenile koi are easy to obtain, and koi are easy to breed; thus a selective breeding program is easy to set up. As the koi grow they are high graded to keep the RAS at the optimal biomass, but of the highest value fish. These high value koi can be bred selectively or the gametes themselves sold.

“I didn’t realize koi could be so valuable,” Croxall says. His koi are still less than 500g but he has already started to notice some potentially valuable koi in his tanks. “We are starting to see the potential of the koi themselves and are considering keeping koi to drive the RAS, while trying to develop revenue from the koi [instead of bringing in a crop fish],” he says.

With the risks involved in raising crop fish, the ease of raising koi, their ability to maintain a healthy RAS and the potential value of koi may have many aquaponic producers re-examining their fish choices.