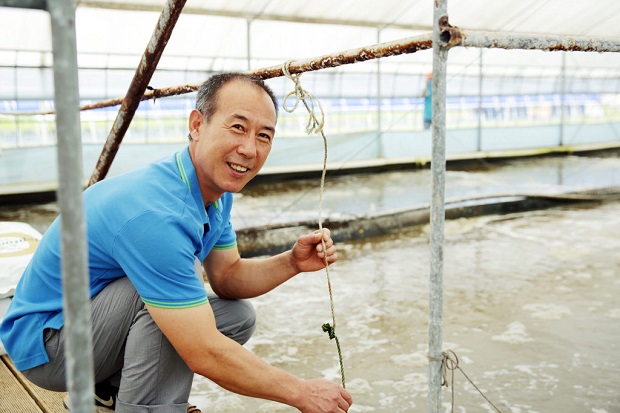 For billions of years nature has refined and fine tuned the aquatic environment and species living in it. So instead of trying to fight, why not take a cue from mother nature?

In traditional recirculating aquaculture systems (RAS) the emphasis is placed on crop specialization and gain yield. This approach tends to clean out existing organisms and natural factors typically encountered  by species being cultured.

However, at Aqua Development the company motto is “bringing nature to our pond.”

Over a period of six years, Cho has developed an aquaculture method that mimics natural environment conditions and factors.

By using what is called aquamimicry, his company has been able to boost yield but at the same time reduce cost of production.

Aquamimicry’s development can be traced back to the 1990s in Thailand. At the time, it was realized that shrimp raised on a rice bran diet avoided disease despite being close to infected ponds, according to the Aquaculture Alliance’s Advocate.

Aquamimicry is a concept that aims to simulate natural marine conditions and apply them to aquaculture systems.

For instance, in shrimp aquaculture the prevalence of disease is a constant threat to specie health and production. Much emphasis is placed in biosecurity.

Some operations use chemicals and antibiotics. Ultimately, the shrimp often end up being raised in a bubble to avoid viruses.

In this situation, aquamimicry could involve simulation of natural estuarine conditions. This could include propagating zooplankton bloom for shrimp nutrition and encouraging the growth of beneficial bacteria to maintain water quality.

Aqua Development says its method focuses on the micro-ecosystem and brings natural factors into their ponds.

The company does not use chemicals, herbicides or antibiotics.

The result is an increase in production by as much as 10 times of that achieved in typical shrimp aquaculture systems.

The company said that cost per unit is “among the lowest in all production methods.”