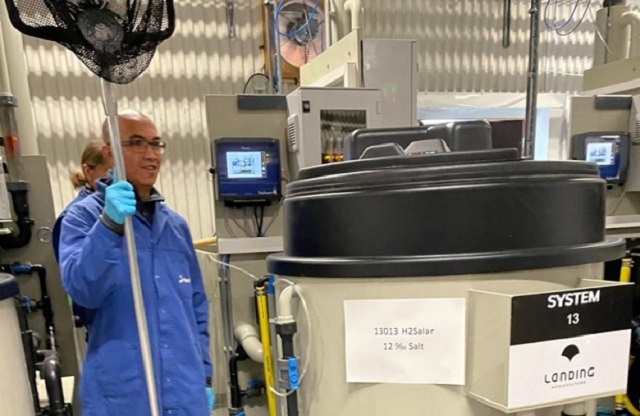 Scientists at the Norwegian Institute of Food, Fisheries and Aquaculture Research (Nofima) say their ongoing research indicates that the noses of salmon in recirculating aquaculture system (RAS) facilities could help operators better assess the risk of hydrogen sulphide (H2S) poisoning.

H2S poses an acute and fatal risk to fish being raised in RAS environments. H2S  tend to quickly develop when seawater is recirculated in a closed facility on land. When this gas form in the biofilter, they can cause fish to die.

Researchers led by Nofima’s senior scientist Carlo C. Lazado, found that the nose of salmon is the organ that reacts most strongly to the gas during chronic exposure to H2S, according to a press release from Norwegian food research institute. The researchers also found the skin was the most sensitive organ during short-term trials, but least sensitive during long-term trials.

“There are more groups of genes in nose that respond to H2S than in other organs,” said Lazaro. “These include genes linked to stress, tissue repair and the immune system. Previous research we have conducted suggests that the gene activity in the nose’s immune cells has some similarities with how the immune cells in the human nose react to H2S. We also found an increased number of mucous cells in the nose of H2S-exposed fish indicating signs of irritation.”

With the study, the researchers now know that salmon cope well when exposed to low levels over time, and that it is “the peaks cause the problem,” said Lazaro. “The knowledge we now have about how the short- and long-term levels affect fish health makes it possible to carry out risk assessments during production.”

However, the ability to save fish will depend on whether RAS operators have fast and reliable measuring tools that can detect minute levels and at the same time measure very high levels, Lazaro explained.