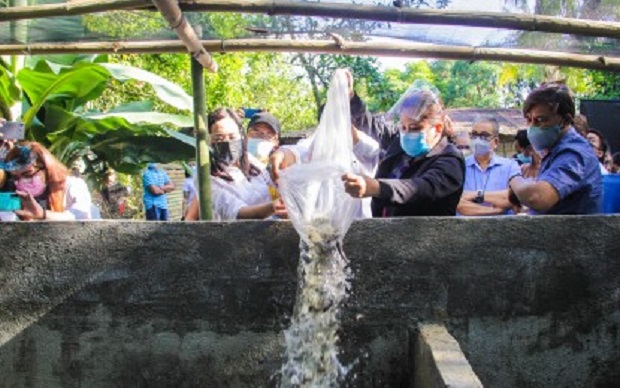 The Department of Agriculture-Bureau of Fisheries and Aquatic Resources (DA-BFAR) kicks-off its aquaculture project in Quezon City on Feb 19, 2021. (Image from (DA-BFAR)

An African swine fever (ASF) outbreak that has swept through pig farms in the Philippines has prompted the government to urge growers to switch to aquaculture. The latest project of the Department of Agriculture (DA) Bureau of Fisheries and Aquatic Resources (BFAR) is offering swine growers the means to erect fish tanks suitable for recirculating aquaculture systems (RAS).

The project  aims to provide ASF-affected farmers with an alternative livelihood and additional income. The government is giving out some 10,000 pieces of catfish and 9,000 pieces of tilapia fingerlings to 60 identified ASF-affected hog raisers in several communities in Quezon City, according to the Philippine News Agency.

DA-BFAR said the fish tanks will be stocked with fingerlings and will be equipped with a recirculating aquaculture system to filter out waste and provide more dissolved oxygen in the water in order to maintain the water’s good quality that is essential to the health and growth of the fish.

The urban aquaculture project is part of the key strategies under the “OneDA” approach initiated by William Dar, DA secretary. The project is meant to stimulate agro-fisheries productivity in the cities by converting vacant lots or structures into food production areas, such as vegetable gardens, aquaponics, and fish tanks or backyard fishponds.

The assistance package also comes with 60 units of filtration systems and commercial feeds that would last a cycle of feeding of three to four months. For one cycle, the urban aquaculture project is estimated to produce 1.58 metric tons of catfish and 1.29 metric tons of tilapia.

The pilot project in Quezon City will eventually be implement in other areas especially those hard-hit by the government measures addressing the pandemic, according to Cheryl Natividad-Caballero, DA undersecretary for Agri-Industrialization and for Fisheries.