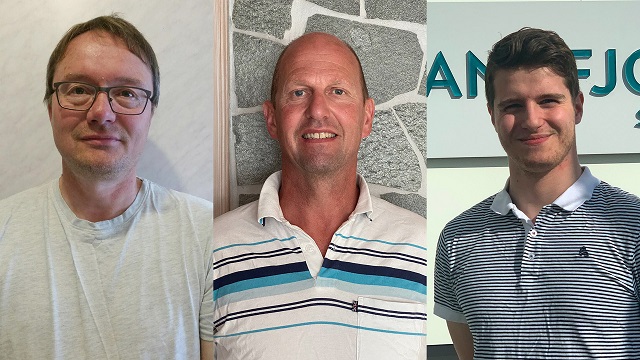 The six-year-old Norwegian company is building subsea-level pool pits in Andøya Island for a land-based flow-through facility that will produce 10,000 metric tons of salmon per year.

Earlier this week, Andfjord Salmon announced that it hired Although Petter Kristiansen, from Sortland, Norway, who has previously worked at the aquaculture group Nordlaks; Kjell Nilsen, also a former member of Nordalks; and Svein Hansen, former employee of salmon farm company Cermaq.

“The project Andfjord Salmon has proved to be very attractive, and we are thrilled with the expertise we have been able to secure on Andøya”, said Martin Rasmussen, chief executive officer of Andfjord Salmon AS. Rasmussen himself joined Andfjord just seven month ago.

Kristiansen, who at 22 is currently the youngest employee at Andfjord, has already racked up three years of experience at Nordlaks Products as well as another three years at Nordlaks Farming.

“The opportunity to take part in Andfjord’s land-based project is therefore beyond exciting. Over the past years, I have spent a considerable amount of time working on the camera surveillance and feeding the fish. I am eager to continue this journey on an innovative land-based facility,” said Kristiansen.

Nilsen has worked for Nordlaks since the 1980s. His latest posting was on a service ship at Nordlaks Maritime.

Hansen was operations technician at Cermaq. Before that, he also worked for firms such as Aker Seafood, Salmar and North Salmon.

“After many years in the offshore fish farming industry, I am thrilled to be joining a land-based facility. This is the future,” said Hansen.