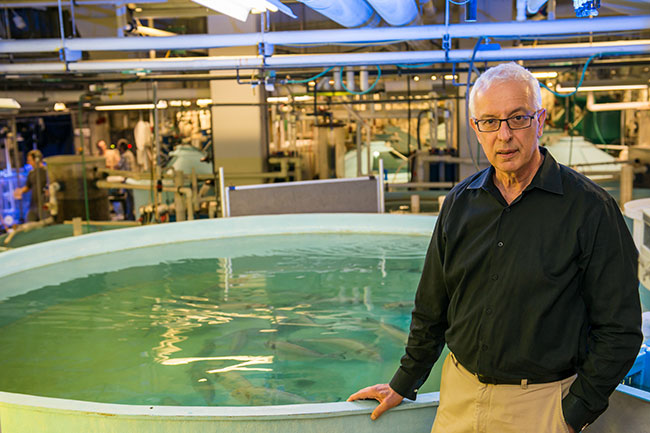 Yonathan Zohar is professor and chair at the Department of Marine Biotechnology, as well as director of the Aquaculture Research Center in University of Maryland Baltimore Country. Photo:Yonathan Zohar

Yonathan Zohar believes that in order for recirculating aquaculture system (RAS) technology to truly become the future of food, then stakeholders must work together to ensure the success story.

Zohar has earned global recognition for his more than 40 years of research and development in the global aquaculture industry. Starting from his early days at the National Center for Mariculture in Israel, Zohar says the priorities of his research have always been to identify what he calls “bottlenecks in the industry” and develop technologies to open them up. He has made notable contributions to fish reproductive biology and endicronolgy, broodstock management, hatchery technologies and land-based aquaculture.

He now serves as professor and chair at the Department of Marine Biotechnology, as well as director of the Aquaculture Research Center in University of Maryland Baltimore Country. He is also program leader of the Recirculating Aquaculture Salmon Network (RAS-N) which he helped found in 2018.

In RAStech Magazine’s latest podcast episode of RAStalk, co-host Brian Vinci sits down with Zohar to talk about RAS-N and what the future of the industry holds through innovation.

RAS Talk: Tell us why you decided to pull together RAS-N and what you hope the outcomes will be.

Yonathan Zohar: The initial NOAA Sea Grant came up with a request for proposal for collaborative research that would help aquaculture in the United States. And this was about three years ago. At the time, we started to see the boom in land-based Atlantic salmon production in the United States. There were all these investments and growth in the industry and we have, I think, a collective responsibility to make sure that it will be a success story.

So that so the idea is to combine researchers, engineers, educators, extension people to look at the industry and identify gaps in knowledge and barriers to success. RAS-N is stakeholder-based so it’s a public-private kind of partnership with many of the main producers, growers involved. And it’s all about working and thinking.

We’re going to do two things. Number one, we’re going to develop a white paper that will review the history of the industry, that will look at all those core aspects that I just mentioned – the biology, the technology, the economy, they’re the extension, public relationship, workforce development, all those kinds of things – and identify priorities for research and development.

And this will all lead to a strategic plan or a roadmap that will end up putting all these recommendations together. Most importantly, it will recommend to the federal government, to state governments, to the industry, to foundations, which areas of R&D should be developed, what are the priorities and where to spend the dollars to help overcome these barriers. So that this industry can deliver on its promise and be as successful as and as stable as possible.

RAS Talk: As one of the peer reviewers of the CtrlAQUA program, do you think RAS-N will develop into larger research efforts similar to that?

Zohar: I was very inspired by CtrlAQUA. I think it’s a very beneficial program to the industry, much larger than what we are. Yes, we do intend to grow the program. But right now, RAS-N is mainly about its building capacity so it’s not a lot of hands on research.

But what we want to do is take the deliverables of RAS-N and develop it and implement it and go much… Really taking whatever RAS-N will recommend and convert it to real R&D, opening this bottleneck, overcoming those barriers on everything – technology, biology, extension, outreach, education, workforce development, economic feasibility.

So fingers crossed, we put in a very strong and long proposal (to the USDA Agricultural Research Service). We worked on it for months and months, and we will know by September. And this is really, this really will take us to the level of what CtrlAQUA is, and where we want to be in this country.

RAS Talk: You mentioned researching and overcoming the challenges that the industry is facing. What research is your group currently working on at the Institute of Marine and Environmental Technology (IMET)?

Zohar: Many of us are working on different aspects related to aquaculture with the mantra of environmental responsibility. We continue to do a lot of work on group stock management, year-round sea production, which I think is very important for the Atlantic salmon industry in the U.S. to be independent and to develop our own broodstock year-round. They are available from overseas, which is great and great quality but I think we need to also think about having them domestically.

The flip side of the coin is reproductive sterility and we can talk about it later is extremely important for aquaculture in general, and for land-based RAS technologies as well, to understand the problem that is still there in early maturation.

RAS Talk: What do you think is next for RAS?

Zohar: I think it’s all maturing now. And I think it’s the maturing is a combination of engineering, but also the biology. I think we were able to manage the life cycle in RAS. We’re able to start dealing with early maturation, high-efficiency feeds and so on. But I think we still have challenges and several of them.

If I had to list our main challenges, what will be the biggest one and the one that comes up again and again and again, is the off-flavour. And so I think we’ll need to study much more. And we will need to totally understand it and hopefully, if we get the USDA fund, we’re going to collaborate more on that (with the Freshwater Institute).

But the idea is to understand what are the sources of the geosmin and MIB, which bacteria and what are the environmental conditions that help them thrive, or will actually help eliminate them.

The purging water now is is a big headache, because our challenge they have to release now huge amount, they cannot use it as new water in the system to the recycling, though, so we need to find technologies to mitigate and overcome off-flavours.