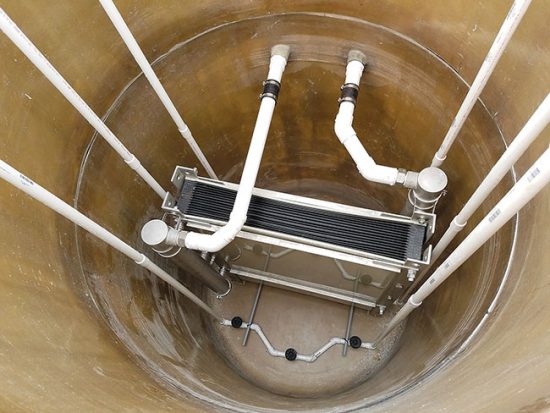 Past research at the Freshwater Institute (FI) demonstrated that MBRs are a promising and scalable wastewater treatment technology for aquaculture effluents. FI researchers found that a MBR removed nearly all biochemical oxygen demand, nitrogen, phosphorus, suspended solids, and heavy metals from aquaculture wastewater. MBR effluent treatment was so effective that we theorized that the permeate created by MBRs could potentially be returned to recirculation aquaculture systems (RAS), thereby creating a system that recycles 100 per cent of its process water.

Traditional RAS already reduce water use significantly; however, the need for additional water savings has recently been amplified by the increasing scale of new and planned commercial RAS facilities (from 5,000 up to 30,000 mt/yr).2 We formerly estimated that a 1,000 mt/yr RAS salmon farm might require > 3,000 m3 makeup water/day; however, commercial farms with expanded production goals could require at least 5 to 30 times more water. Nevertheless, water savings provided by MBR integration within RAS could offset the amplified water requirement dictated by increasing farm scale.

For example, successful integration of MBRs within the water recycle loop of RAS could result in a 10-fold reduction in water use compared to traditional RAS that rely on low-level dilution for nitrate control.

In addition, organic-rich conditions similar to those found within MBRs have been associated with uptake and remediation of common off-flavour compounds, geosmin and 2-methylisoborneol (MIB)3 which can cause negative consumer perception of aquaculture products. Thus, MBRs could provide a treatment mechanism that eliminates or reduces the problem of off-flavour in RAS.

Lastly, MBRs digest and aerobically stabilize system waste into non-malodorous biosolids that could be suitable for composting or land application as a nutrient-rich soil amendment. 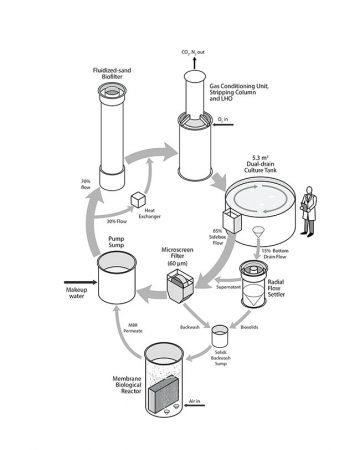 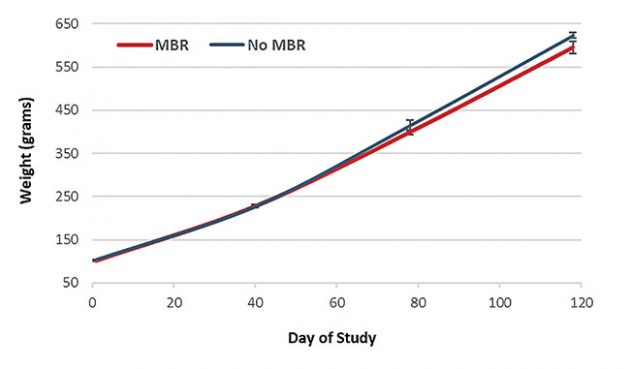 Feasibility study
With these potential advantages in mind, a four-month study was carried out to evaluate the feasibility of incorporating MBRs (Alfa Laval, Sweden) within RAS. Six replicate RAS (9.5 m3) were used for this research. Three RAS included MBRs in the water recycle loop (Fig. 1) and only received new water to replace evaporative loss, splashing, and minor system overflows. MBRs received biosolids-rich backwash created by microscreen filters and radial flow settler flushing, which otherwise would be removed and processed by separate wastewater treatment systems. A clean, gravity pressure-driven permeate was forced through fine-pore membranes (Fig. 2) and returned to the pump sumps of respective RAS. The other three RAS, which served as controls, were operated without MBRs and utilized flushing rates that provide conditions for acceptable rainbow trout health and performance. Replicate RAS were stocked with equal numbers of rainbow trout (103 ± 1 g) prior to the study.

Integrating MBRs within RAS resulted in substantial water savings and appeared to be biologically feasible for rainbow trout production. RAS with MBRs used six and a half times less water than RAS without MBRs. Mean system hydraulic retention time for RAS with and without MBRs was 104 ± 31 and 13 ± 1 days, respectively.

As the study progressed, we discovered that backwashed biosolids alone did not provide enough carbon to completely drive denitrification or to create optimal alkalinity recovery; therefore, a small amount of sugar (~ 1% of fish feed mass provided during the study) was periodically added to MBRs during the second half of the trial. After sugar was added, denitrification efficiency increased dramatically and nitrate-nitrogen (NO3-N) and alkalinity levels stabilized in the fish culture water.

Over the duration of the study, a range of water quality parameters, including NO3-N, were affected by MBR inclusion within RAS. Total ammonia-nitrogen, total phosphorus, true colour and dissolved calcium, copper, magnesium, and sulfur levels were greater in RAS with MBRs, while alkalinity and ultraviolet transmittance were statistically lower (P< 0.05). Nevertheless, rainbow trout performance was generally unaffected by the different culture environment (Fig. 3).

Findings
At the end of the trial, mean rainbow trout weight in RAS with and without MBRs was 595 ± 14 and 623 ± 6 g, respectively (P > 0.05). Although literature suggests that off-flavour compounds can be adsorbed by solids in anoxic environments, reduction of geosmin and MIB levels was not achieved (P > 0.05) in fish flesh or the culture water of MBR-integrated RAS under the conditions of this study. Off-flavour removal may have been inhibited by higher than anticipated oxygen levels (> 2 mg/L) within MBRs during the first month of the trial. The PLC-based aeration sequence used to mix activated sludge within the MBR vessel was eventually fine-tuned to maintain consistent oxygen levels of 0-2 mg/L which provided a balance for nitrifying and denitrifying microbial populations.

The results from this preliminary research trial are promising for MBR integration within RAS; however, further optimization is still required. MBR permeate was produced at a slower than specified flow rate, resulting in periodic system overflows. The cause of the diminished permeate flows is still under investigation; however, it seems logical that an improved membrane cleaning protocol will need to be applied to maintain effective permeate flow rates. If acceptable MBR permeate flows can be maintained, a range of improvements could result including increased water savings and enhanced treatment capacity to reduce concentrations of nitrate and other accumulating compounds in the culture water while recovering alkalinity. Ozone could also be utilized to optimize the culture environment of MBR-integrated RAS by removing colour associated with dissolved organics, increasing ultraviolet transmittance, and reducing dissolved heavy metals concentrations.

The Freshwater Institute team is planning to carry out additional research to optimize MBR integration within RAS with the coinciding use of ozone. Meanwhile, preliminary research indicates that membrane biological reactors appear to be a promising and well-suited technology that can be included in RAS.