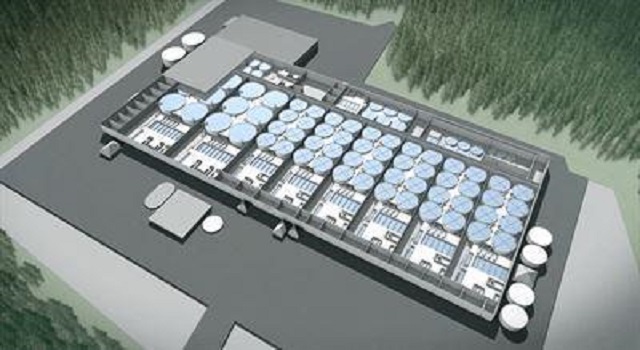 An aquaculture start-up planning to build Sweden’s first large-scale, land-based salmon farm has secured SEK 530 million (US$50.6 million) in funding from the lending arm of the European Union.

The European Investment Bank (EIB) reported this week that it has agreed to release the money as a venture debt investment on Re:Ocean (formerly Premium Svensk Lax) which plans to build a land-based fish farm in Säffle, in the woodlands of Värmland, Sweden.

The Säffle facility is expected to be in full production by 2025. The facility will have a production capacity of 10,000 tons of fish per year.

The land-based salmon farm, employing cutting-edge zero-water circulation technology, according to a press release from EIB. As much as 99.999 per cent of the water is said to be used in the facility in a closed environment. The facility will also use fossil-free energy for power.

“Not only will RE:OCEAN’s new facility provide the Swedish population with domestically and sustainably produced salmon, but it will also do so in an innovative and climate-friendly way, employing cutting-edge zero-water circulation technology. In addition, food supply has become an important part of the critical infrastructure of any economy and the Säffle salmon facility will strengthen Sweden’s food self-sufficiency and resilience,” said Thomas Östros, vice-president of EIB.

Swedes eat an average of 12 kg of fish per year. Currently, Sweden imports nearly all of the salmon consumed in the country.

“The EIB investment is a strong signal of trust and a cornerstone for other investors in our new, sustainable food production concept, and a result of 12 months close cooperation,” said Katarina Klingspor, chair of Re:Ocean. “This process also verifies our team’s and partners experience within the industry, our highly advanced solutions and new technology, that will enable consumers to enjoy clean, healthy locally produced salmon while safeguarding our environment.”