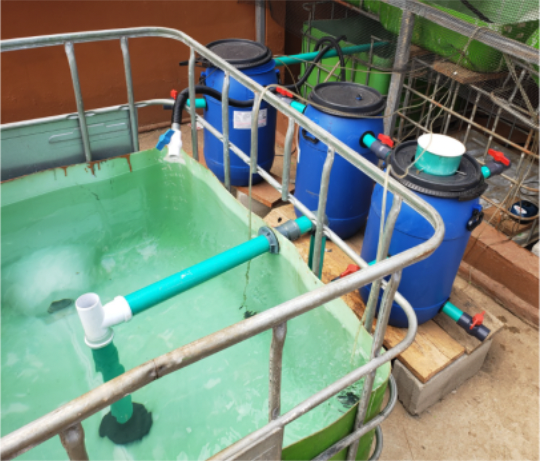 Small-scale recirculating aquaculture systems (RAS) could be viable in sub-Saharan Africa but its barrier to entry is still steeped with challenges, according to a new study.

The study was titled “Feasibility Study of a Small-Scale Recirculating Aquaculture System for Sustainable (Peri-)Urban Farming in Sub-Saharan Africa: A Nigerian Perspective” and published on Nov. 17 in the peer-reviewed Land journal. It explored the feasibility for micro- to small-scale RAS systems to be installed in urban farming settings within the sub-Saharan Africa region.

The study was conducted by Emmanuel O. Benjamin and fellow researchers from the Technical University of Munich in Freisberg, Germany. They wrote that while flow-through aquaculture has been the main source of fish protein in the city regions, the aim of the study was to investigate how small-scale RAS has the potential to improve food and nutritional security and livelihoods in the region.

The pilot project was called the Sustainable Aquaponics for Nutritional and Food Security in Urban Sub-Saharan Africa (SANFU) II project. It was conducted between March to June 2022, on an area of 13.4 m2 with a partial open greenhouse in Lagos, Nigeria. The design was based on a simplified design and fabrication of RAS consisting of a fish and sump tank, a solid lifting outlet (SLO), a redial flow settler and mechanical and biological filtration that are all linked together as a process stream. Production started out with 148 African Catfish fingerlings. After 84 days into the four-month growth cycle, 22 African Catfish had achieved a marketable table size of ≥500 grams. 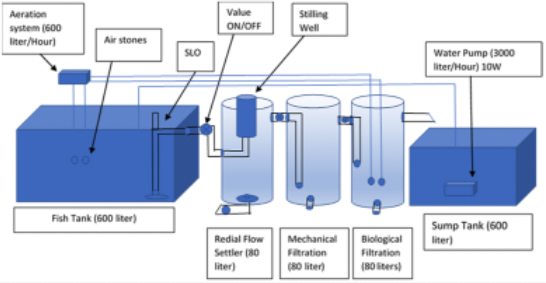 The study found that while small-scale RAS can be technically viable, high investment cost is a great barrier for many urban farmers in the region. According the estimations, the total cost of a complete solar-powered micro- and small-scale RAS would range between ₦1,000,000 (US$1724) and ₦2,000,000 (US$3500) in Nigeria. This cost range is very similar to the average annual income of between US$1046 and US$4095 per capita (in constant 2020 US$) in Nigeria, a lower–middle income country.

“This comparison highlights the investment challenge to vulnerable groups and poor urbanites,” the study said. “In terms of scaling the project to reach more households, an important question to ask concerns the high initial investment, which can be mitigated through government and private sector funding, e.g., grants, concession loans, guarantee credits, etc.”

“We assume that within the family, there is a high level of unemployment given that the current unemployment rate of Nigeria is 33 per cent. These family members could pursue RAS as the alternative to forego productive capacity, losses in national income and social exclusion,” the study said.

Unstable electricity and the lack of adequate inputs is also a challenge. A minimum of 14-16 hours of electricity is required to raise hardy fish such as African Catfish or Tilapia. The electricity outages in Lagos, Nigeria, often lasting for hours, are problematic for pumping and recycling fish wastewater and providing oxygen through aeration systems.

The study recommends  for the African governments to invest in renewable energy sources to increase the availability of green electricity and make them accessible to the public.

The lack of inputs, specifically hardware, as well as the high variable cost of fish feed is a major concern for small-scale RAS adoption and implementation in Nigeria. Conventional plumping hardware, often used in aquaculture operations in Nigeria, reduces the efficiency of RAS.