The key to Sandplains Aquaculture’s success is to evolve 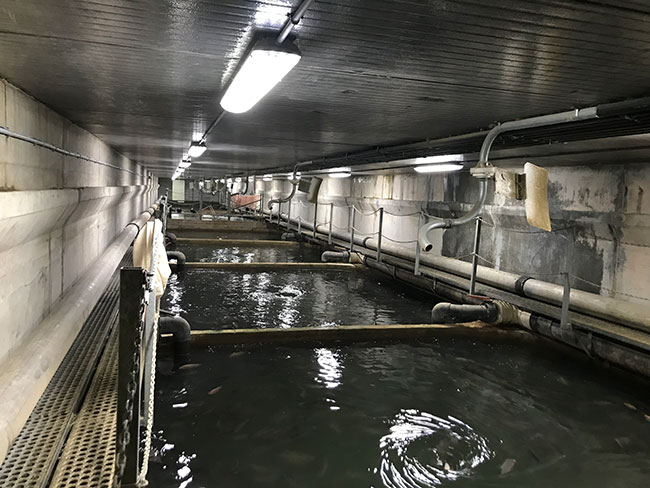 The fertile farmlands of what was once Canada’s great tobacco belt are an unexpected location to find a large fish farm. Unseen beneath the stretching fields of what are now corn and ginseng crops lies a large aquifer of cool, clean groundwater.

Drawing this water, the team at Sandplains Aquaculture, near Mossley, Ont., has been operating a warm water recirculating aquaculture system (RAS) for 10 years producing tilapia and barramundi for the local live markets.

Indeed, few facilities can point to a record of RAS success comparable to Sandplains Aquaculture.

Capturing live markets
Facility manager, Roger Bushey, explains the original goal of the facility was to provide tilapia to the local live fish markets and displace some of the imported tilapia. Nearly all of Ontario’s live tilapia was imported from the United States at the time.

Sandplains is located one to two hours from the largest urban markets in Canada, the Greater Toronto Area, where the majority of fish are sold.

Fish distributors with a network of live fish outlets purchase the tilapia and pick up the fish at Sandplain’s facility. The distributors haul the fish to the local stores and transfer them to tanks in-store until they are sold to customers.

“Our goal is to get the fish from our farm to the customer’s plate in three to four days maximum. We expect our vendors to move our fish quickly,” Bushey says. “When dealing with live fish, the quicker the turnaround, the better.”

A second life
The site began as an exceptionally large composting facility that made specialized compost for mushroom producers. The large building that is now Sandplains Aquaculture housed long, concrete channels with flat bottoms and tall, straight walls into which compost materials were dumped at the top end. Materials were mixed, turned, and pushed along the channel over time. As good compost formed, it was removed from the bottom end of the channel.

The compost facility closed and the opportunity to build a fish farm on the site was seized. New owners, E&E McLaughlin Ltd. of Tillsonburg, Ont. took over the site in the mid 2000s, following a downturn in the market that forced the closure of the compost facility. The company began renovations to the site in 2012 to create a large-scale RAS.

“It was a lot of work and challenges I wouldn’t want to go through again,” says Bushey. “The process of turning the composting channel into fish tanks was very challenging and took thousand of yards of concrete, after removing tons of concrete.”

Concrete walls were poured to divide the long channels into tanks. All the walls had to be smoothed and rounded where they met the floor of the channel to create a surface to promote proper drainage, self-cleaning, and circular water flow patterns.

Plumbing in proper drains, water control and all the needs for a RAS system increased the complicated renovation. With tanks and life support system installed, monitoring sensors and the centralized feed system were added to complete the first fish rearing system.

The Sandplains RAS is 99 per cent efficient with most of the water being lost to evaporation and through the filtration cleaning process.

“Because our RAS is so efficient, we don’t discharge any water into the natural environment,” Bushey says. “Our waste is collected in a man-made wetland on the property. From there, the solids are used to fertilize our hay fields. No discharge is a benefit for us in terms of environmental monitor and permitting.”

Sandplains sells their hay to local farmers, turning their waste product into a small revenue stream.

Saving energy
One of the unique technologies employed at Sandplains is the cogeneration system used for power and heat. Despite being on the electricity grid, the farm is kept separated. The province of Ontario, where Sandplains Aquaculture is located, has the dubious distinction of having North America’s highest electricity costs.

“The co-gen system has been very good for us and makes heating the water viable,” comments Bushey. “We do everything we can to avoid drawing power from the grid.”

Cogeneration is a very efficient technology where, in the case of Sandplains, natural gas is used to simultaneously create heat to warm the fish tanks to 28 C, and electricity to power the facility.

As a back up in case of failures, there are backup co-generators; the cost of electricity is such that the grid is the tertiary option for Sandplains. 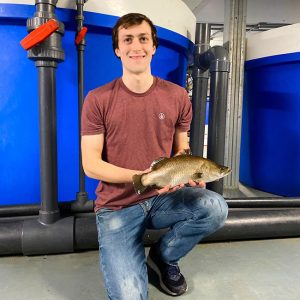 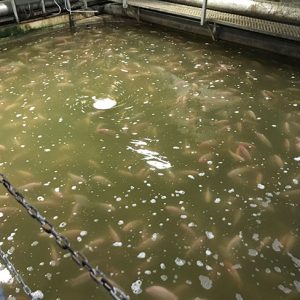 Room to grow
After years of successful tilapia production, the team at Sandplains began a huge expansion project in 2018. With the concrete channels already turned into fish rearing channels, Sandplains looked to new construction instead of renovation for the new capacity.

“It was much easier and actually ended up cheaper to build the new tank systems,” says Bushey, “And the new systems are much easier to work with. With the new and old systems combined, our production potential is well over one million pounds (450,000 kilograms) of fish per year.”

The footprint was expanded, and a new RAS system of large round tanks was added. On first inspection, the new tanks seem quite standard, though of very large capacity. Once they are looked at up close, it is revealed the tanks are actually recycled materials.

Instead of fibreglass or concrete, the tanks at Sandplains are steel sections of silos used for crop storage.

In a proprietary process, the tanks are treated and lined on the inside to make them fish safe. They are put into place with a similarly treated concrete bottom. The result is very sturdy, high volume, round tanks without the costs of creating and shipping custom tanks.

The silo sections were available locally (farm country) and could be customized by adding the desired number of sections to create the desired height.

New species
With new RAS systems coming online, the team at Sandplains also looked into new species in 2018. The company observed a change in the live market. Tilapia sales started to slow and the Sandplains team looked to diversify.

Barramundi was popular in the global market, fetching a much higher price per fish than tilapia.

“We are currently running about 25 per cent barramundi and 75 per cent tilapia production,” Bushey says.

But, there were many challenges with learning to rear the barramundi.

“The barramundi was tough at first to get the hang of,” says David McAlpine, assistant manager at Sandplains, who spearheaded the mission on the floor. “Cannibalism was the first thing we had to deal with. Once cannibalism starts, it’s very difficult to break the fish of it, so you have to avoid it completely.”

“Heavy feeding, constant grading when they are small became standard-grading every week even,” he added.

Cannibalism becomes a learned behaviour in some fish stocks, notably walleye and barramundi. Fish see other fish with cannibalistic behaviour and copy that behaviour to survive.

Cannibalism causes loss of fish directly when they are eaten, but also in secondary adverse health problems caused when the violence in the tank creates wounds and lesions, increasing stress on the stock. Increased stress cause outbreaks of fungus and other background pathogens affecting even more fish.

Bushey calls the barramundi “caged grizzly bears” and links the need to keep feeding them to avoid cannibalism to their fast growth. Sandplains Aquaculture grows their 0.1 grams barramundi fry to 700-750 grams in six to seven months. 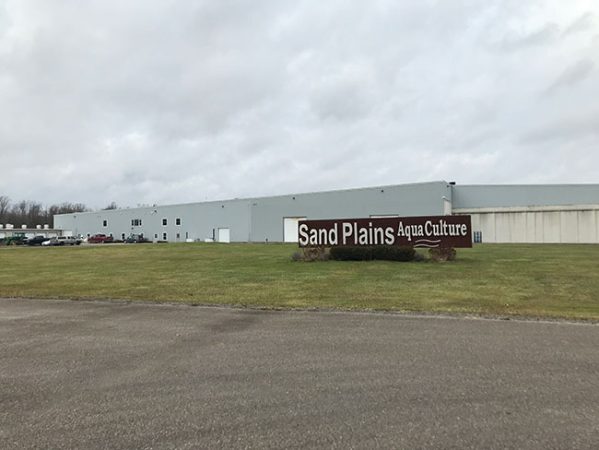 Sandplains Aquaculture is located near Mossley, Ont. in Canada. The facility was converted from an old composting facility. (Photo: Ron Hill)

New normal
The global pandemic has changed the buying habits of live fish market consumers and again, Sandplains has found themselves looking to pivot. With consumers visiting their fish market less often, the demand for live fish has dropped.

“Instead of going to the market every day or every two days to get their fish, our customers are now going seven to 10 days between trips,” Bushey says.

“Obviously, that impacts what consumers buy – in our case, live fish. There was also a ripple effect from the other producers, who usually sold to restaurants and were suddenly, desperately trying to move their product. It has made for a challenging market in the last two years.”

Sandplains Aquaculture has recently been exploring the filleted fish market with their barramundi. Partnering with John O’s Foods for processing, and distributing through local fish sellers Springhills Fish, Sandplains has begun to bring barramundi to the average fish consumer.

“The biggest challenge for us now (with the barramundi) is awareness,” says McAlpine of the market challenge. “Barramundi is an unknown fish in North America, so how do we introduce it to people in this region? It has a great flesh and flavour. We know how to grow it and we have the capacity to grow more. We just need to get it out there to increase demand.”

Partnering with Springhills Fish’s direct to door delivery service has given Sandplains Aquaculture a vessel to get their message and their product directly to consumers and allows consumers to ask questions about their fish and their farmers.

“Going forward, we plan to keep adding fish and keep looking at potential new species until the tanks are full and we are in 100 per cent production,” says Bushey when asked about what the future holds for Sandplains.

With the ability to culture copious quantities of warm water species close to market and the flexibility to add new species, Sandplains is poised to be a RAS leader in North America for years to come.