With many farms moving the vital components of their production indoors the cost of power is becoming a major issue. Situated 250km southwest of Sydney near the township of Tarago, the French company Veolia is using methane from household garbage to generate enough power for 12,000 homes, plus run a demonstration barramundi growout and aquaponics program at their Woodlawn Eco-Project. 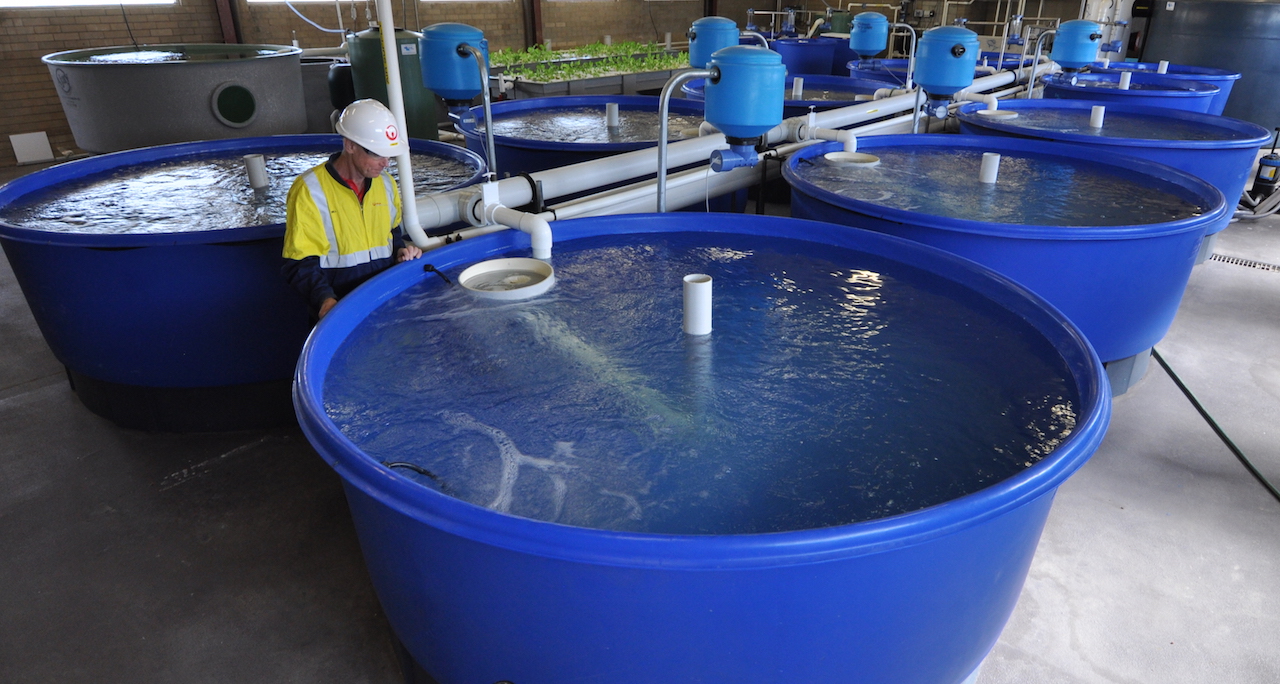 The project has five components: a decommissioned open cut mine converted to a bioreactor; re-cycling and composting of domestic waste (due to start in 2017); reclamation of degraded land; and food production (aquaculture & horticulture).

The aquaculture structure consists of three recirculating aquaculture systems that are heated via the coolant from the power station generators. Nutrient-rich wastewater, after it has been through the bio-filters and had the solids removed, is used in a demonstration hydroponics component.

Veolia’s Woodlawn Environmental Officer, James Easterbrook, explained that the farm was a pilot, and that a project team gleaned enough data to move onto a feasibility study to expand to a 50 tonne fish farm and a 2ha greenhouse growing cherry tomatoes.

The pilot facility is divided into three components: aquaponics; nursery; and growout. Built by Fresh By Design (FBD) in 2013, the nursery and the growout areas are of similar design.

The nursery consists of 4 x 1,000L tanks, from which water flows by gravity through the 36µm Faivre 2-40 drum filter to a sump. From there it’s pumped (1/2 hp RK2 system pump) through an AST (Aquaculture Systems Technology) Bubble Bead Filter (bio-clarifier) further polishing mechanically and also providing a portion of the biological filtration, then though a 300Watt Emperor Aquatics UV and on to a 1.2m3 moving bed bioreactor (MBBR), containing 0.5m3 Kaldnes media with a surface area of 8002/m3. The water returns to the tanks under gravity.

The growout system consists 4 x 2,000-l and 6 x 5,000-l tanks, with the water flowing by gravity through a Faivre 4-80 Drum Filter with 36µm screens and into a 9m3 fibreglass sump. Two pumping loops are then created, one lifts water up into a 13.5m3 MBBR containing 5m3 of Kaldnes media. The second loop uses a pump to direct water through an AST Propeller-wash Bead Filter (PBF5) for bio-clarification, prior to flowing through an oxygen cone and 300W Emperor Aquatic UV system. The two pumping loops are directed to a header tank before returning by gravity to the fish tanks. Tank water is exchanged twice an hour.

An oxygen/ozone mix is added to the oxygen cone (AirSep Ultra and 8g/hr RK2 OzoneGenerator). The ozone generator is automatically controlled via the YSI 5200 Recirculation Monitoring system. The same YSI 5200 is also applied to the nursery system and provides constant monitoring of DO, pH, temperature, ORP and salinity to aid in system maintenance, and is linked to allow remote alarming and remote monitoring of the systems.

The third stream, the aquaponics system, consists of two 5,000-l fish production tanks and a series of 1.5 x 6m x 0.7m x 0.3m deep hydroponic x trays. Again water flows by gravity from the tanks, this time passing through a swirl separator and into a sump, from which water is pumped via a ¼hp vRK2 System pump, through an AST Bubble Bead Filter, a 50W Emperor Aquatics UV, and into 1.3m3 MBBR containing 0.5m3 Kaldnes media. From here water is split to both of the 5m3 fish culture tanks, and to the Aquaponics trays.

A manifolded side-channel blower (plus a standby) directs air to each of the system’s MBBR’s, and also to the fish culture tanks. Argotic feeders at each culture tank automate the dispensing of food. They use Skretting barramundi pellets and get 1:1.5 food conversion efficiency.

Each of the three systems has its own dedicated circulation pump (RK2 System Pump), drawing water from the system and directing it through a water-to-water heat exchanger. This is where hot water from the gas powered generators is circulated, thus heating water in the fish recirculation systems to the desired temperature of 27°C for growing barramundi. Daily water exchange is 5-10% and the tank water is exchanged twice an hour.

To complete the holistic approach to the pilot design, waste water from the fish culture systems is collected in out-door settling tanks from where the solids are collected and disposed of within the methane-generating Woodlawn bioreactor.

Aquaculture and are ready for market at 600-800g fish in 9-12 months. They’re sold live at the door, 45 minutes from Canberra, the national capital. Farm Assistant, Josh Biggs, said that being a pilot project, they only produced a bit over three tonnes a year, but their fish are in the market place within an hour of leaving the farm, and in most cases on someone’s plate within 24 hours.

“This gives them a huge market advantage over fish that have had to travel over vast distances at considerable cost, and with a much smaller carbon footprint.” They sell through local wholesaler FishCo Fish Markets, where the owner, John Fragopoulos said that his customers recognized the difference in the quality, colour, flavour and texture of the less travelled fish.

Josh, said the hydroponic system is a bit of a balancing act. “We have to ensure that the needs of the plants don’t encroach on the needs of the fish.” This has always been a moot point in the development of aquaponics: which gets the nutritional priority – the plants or the fish? Veolia is in discussions with an established hydroponics operation and is working through some of the complexities of hydroponics at the commercial level.

But the fish farm and hydroponics are just two of the benefits from one of the most exciting environmental projects underway in Australia. 500,000 tonnes of garbage collected at curb side, is compressed and taken by rail to the site annually from Sydney. This saving over road transport alone is the equivalent of taking 2,000 cars off the road. It’s estimated that over its 50-year life the 25 million cubic metre void left by the copper, lead and zinc open cut mine will take 20 million tonnes of waste. The Bioreactor can extract 68,000 cubic metres of methane gas daily supplying the power station’s six 1.1MW Jenbacher engines on the resultant Landfill Gas. The new sorting and composting plant will re-cycle a further 150,000 tonnes of waste annually, and this will be used to reclaim 6,000ha of degraded land and tailing ponds.

As an added bonus, Infigen Energy leases land from Veolia and has established a 20-mill wind farm on a ridge of the Great Dividing Range. Each produces 2MW/hour of power in their own right.

Methane has a 21 times greater impact on climate change than CO2. It’s been assessed that Veolia collects 92% of the methane produced from the household garbage, and that each 75 tonnes of organic waste can produce a megawatt of clean electricity. Last year the Woodlawn Eco-Project exported 36,901 MWh to the grid, and the total gas extracted from the void was just over 23 million cubic metres. That’s good science giving great outcomes.

In a first world country with a concentration of high density population centres along its eastern seaboard – centres that produce mountains of garbage daily – and a hinterland hollowed out by the mining sector for a resource-hungry planet, this ground breaking work being carried out by Veolia at their Woodlawn Eco-Project is vital to the way we sustainably manage our 21st Century lifestyle.

For more information visit the Veolia Woodlawn Bioreactor at: woodlawn@veolia.com.