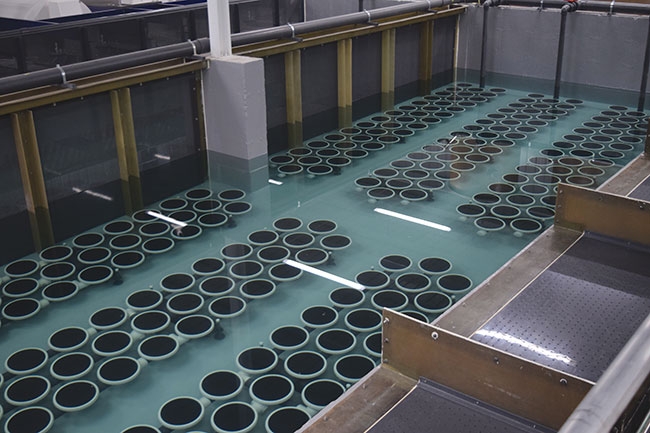 Aeration area of the sump where CO2 is removed from the water and oxygen is injected. The CO2 stripping efficiency of today’s RAS technology has improved One aspect of RAS technology that invites skepticism

One aspect of RAS technology that invites skepticism is the “new-generation technology” that’s supposed to have improved to the point where it can be profitable for raising Atlantic salmon to market size.

“Both perspectives are true and have validity,” says Samuel Chen, a B.C.-based aquaculture industry consultant.

“There have been many incremental improvements and developments in RAS over the last 10 years. Although the key components of the systems have not changed, there have been developments that have lowered the cost, improved efficiency, and enhanced effectiveness of the constituent parts,” Chen says. “As examples, we’ve seen the cost of ozone decrease substantially. CO2 stripping efficiency has also increased.”

“A failure we see a lot less in RAS design has been biofilter sizing,” Chen adds. “In a recirculating system, you are both feeding the fish and the biofilter.

Aeration area of the sump where CO2 is removed from the water and oxygen is injected. The CO2 stripping efficiency of today’s RAS technology has improved

A mass-balance calculation cannot just be based on average daily feed rates or even just the maximum/minimum feed rates because of the need for stability of the biofilter. Today biofilters are sized with much more buffering capacity.”

How about doubts about RAS being suitable for Atlantic salmon grow-outs?

“I don’t agree that salmon are mal-adapted for RAS nor that technology is the major barrier for success,” Chen says. “This is secondary to the operational and business challenges of the RAS business model.”

Instead, the primary challenge is the large capital outlay upfront, he notes. Compounding this is the delayed revenue; the need to build sophisticated distribution and marketing channels to retain more margins; unknown and inconsistent regulatory burdens; and the learning curve of farm operations all while there are established players who have developed commodity pricing for the product are probably the bigger challenges.

“But with the right team, sufficient capital and the right time horizon, I believe there is a market segment for RAS seafood production,” Chen adds. “There are many more control points in RAS production that we have yet to fully learn how to use to improve production quality.”

Related
Evolving to standardize
Smart farm
Peracetic acid use in RAS: Findings from research at The Conservation Fund’s Freshwater Institute
Dutch Yellowtail producer to set up RAS facility in US
Tags