Recirculating aquaculture systems (RAS) technology development has been and continues to be a melding of borrowed engineering. Components of RAS originate from municipal and industrial wastewater treatment industries with applied research and development specifically on aquaculture technologies by academics in public and private institutions, as well as a little creative ingenuity provided by farmers, consultants and system suppliers.

May 29, 2018  By Steve Summerfelt and Bendik Fyhn Terjesen 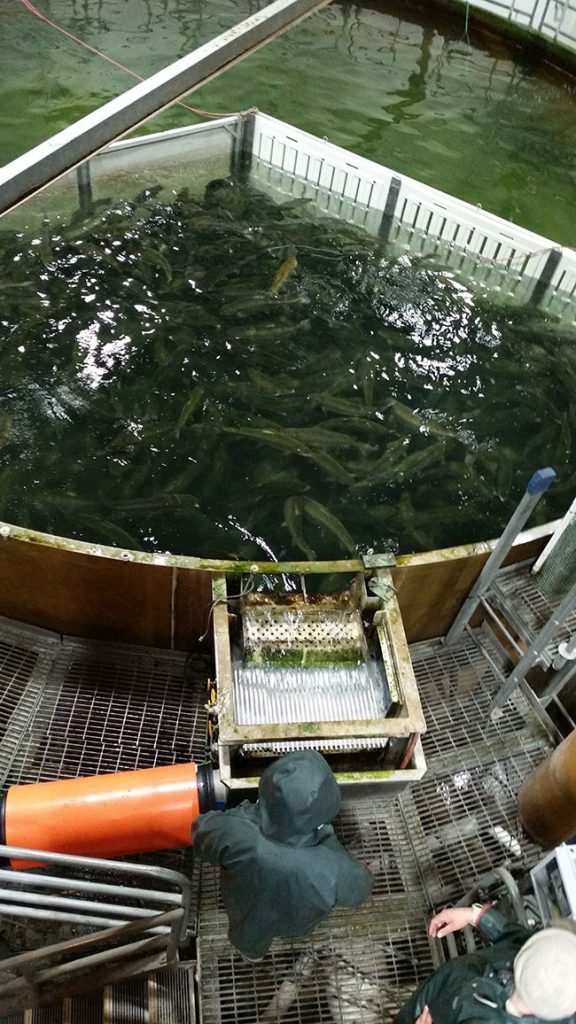 Recirculating aquaculture systems (RAS) technology development has been and continues to be a melding of borrowed engineering.

This melding of technology has not always worked, but we are now seeing many more RAS facilities meeting their production goals.

First RAS
It was only about twenty years ago when the first handful of RAS were effectively used to produce millions of Atlantic salmon smolt in North America and most other major salmon producing countries. Today, market-size Atlantic salmon are already being produced at commercial RAS facilities in Canada, Europe and China, but such facilities are just beginning in the United States.

The first commercial RAS farm in the United States to produce 4-5 kg Atlantic salmon, Superior Fresh (Wisconsin), will begin marketing salmon and steelhead this summer. It has already begun production of just under 1,000 ton/year of salad greens.

In Florida, Atlantic Sapphire is building a RAS complex that is said to be capable of producing nearly 8,000 tons of market-size Atlantic salmon annually, with a later up-scaling to 90,000 tons per year.

Following these leaders are Whole Oceans and Nordic Aquafarms; both are working to permit and begin construction on large RAS farms to produce Atlantic salmon in Maine.

Meanwhile, Hudson Valley Fish Farm has started marketing steelhead produced in its RAS facility in New York; and, AquaBounty has requested permission to produce their “AquAdvantage” Atlantic salmon at an existing RAS facility in Indiana.

There are several other projects that haven’t gone public yet, but these could easily push total U.S. investment towards US$500 million by 2020 and much more by 2030.

RAS for post-smolts
Another use for commercial RAS that has been developing rapidly in the last decade is for producing post-smolts of Atlantic salmon. Post-smolts are salmon that have achieved sea water tolerance and weigh less than 1-2 kg.

By using post-smolts for stocking in sea, instead of normal-sized smolts at around 100g, it is possible to reduce sea phase time and fish mortalities, reduce issues with sea lice, improve harvest volume, and more efficiently use sea sites. Currently, this technology is developing mostly in Norway, but salmon farmers in other countries are also looking into this production strategy.

The facilities needed to produce post-smolts on land can be an order of magnitude larger than for smolts. Facilities capable of producing several thousands of tons per year are now commonplace, and each provides total tank volumes exceeding 25,000m3. This development places new and increased requirements on the efficiency and reliability of RAS.

Improved technology
It was also only about twenty years ago when micro-screen drum filters really became the solids treatment technology of choice. Oxygenation systems were being added to intensify production, and soon after, many RAS suppliers began to look for technologies to control CO2 accumulation within these systems. Refinements and innovations in oxygenation and CO2 control continue to this day. Future improvement will be important because currently, CO2 is one of the defining factors for total system flow and has a great influence on energy use and environmental footprint in RAS.

Tanks for RAS
In that same time frame, circular tanks have been recognized by many to be the best culture environment for RAS because of the relatively homogeneous water quality that they provide. Hydrodynamics in circular tanks are better suited to supplementation with pure oxygen than linear raceways, where less desirable concentration gradients can arise. In addition, the impulse force created by water addition or removal from circular tanks can be adjusted to control the rotational velocities within the tank to rapidly concentrate and remove settleable solids.

Hydrodynamics in circular tanks also allow for good feed distribution and can permit designs that allow for visual or automated sensing and regulation of sinking feeds.

In the future, circular and octagonal tanks are going to continue to become larger and deeper. Such tanks are now approaching 10m depth and 30m diameter in some instances, but even larger tanks are likely in the future. In contrast, the Danish model trout farms and the Veolia RAS 2020 rear fish in raceways within RAS to optimize biomass density management as multiple cohorts move through these partitioned raceways. These raceway-type systems are challenging the status quo when compared to circular-type tanks, yet their use is still a trade-off between benefits/challenges. It’s not yet clear if either will have a definitive advantage.

It will be important for future development of RAS technology that the tanks and their hydrodynamic properties are clearly defined along with the other RAS components. Unfortunately, this is not always the case when major land-based rearing facilities are constructed. If the tank self-cleaning is not working then other RAS treatment processes and fish performance can deteriorate.

Range of biofilters
Biofilters have seen tremendous improvements, and there are many different types applied within RAS. Trickling filters, submerged filters, moving bed biological reactors, and fluidized sand biofilters are all broadly applied in different regions and in specific-niche applications.

Most RAS insiders will know applications where each type of biofilter has performed as required or did not perform as expected. It is rather shocking to us that there are still biofilters being built that cannot control ammonia and nitrite at safe levels for the fish species cultured. In addition, there are substantial differences in performance, foot-print, fixed and variable costs between the various biofilter types. Often the type of biofilter built at a given farm seems to have been determined more by the preferences of the RAS supplier than by the likings and needs of the staff that are operating them.

Ozone in RAS
Ozone is applied more often in RAS to oxidize refractory organics, which removes color, and micro-flocculate small particles. Controlling suspended solids is one of the greatest challenges in RAS for numerous reasons and future facilities will have to use ozonation, foam fractionation (in brackish/seawater facilities), and contact filters to better control suspended solids.

Economies of scale
The scale of RAS construction has surged over the past five years and these systems are expected to continue to grow larger into the future. Building larger RAS provides critical economies of scale to reduce both fixed and variable costs. Fortunately, at least some continuity between projects – i.e., when the same turnkey supplier or farming company is involved with each successive RAS iteration – has allowed these RAS to improve technology, standardize equipment and construction methods, and in due course improve performance, reduce risk, and/or reduce capital and overall operating expenses.

Greater investment in RAS for all phases of Atlantic salmon and Pacific salmon (particularly steelhead and coho salmon) are producing advances in technology that are accelerating its deployment. There is also risk associated with increased scale if it leads to a technology or operating failure. One way to mitigate this is to utilize technologies that have already been proven to perform at large scales in other facilities. Thus, it’s critical to avoid large-scale application of technologies that have not been proven at similar scale, temperature, or salinity whenever possible.

In addition, multiple RAS can be used to meet the same production goal and avoid the use of just one enormous RAS. In particular, if the biomass is split over multiple systems, it can sometimes improve biosecurity and provide some redundancy to reduce risk.

RAS challenges
There are currently tremendous differences in technologies, water quality and production capacities between different RAS facilities. Water flows and the assimilative capacity of the water treatment processes must maintain optimum water quality levels within RAS at up to a maximum sustained feed loading, which is the carrying capacity of the RAS.

Even the very best designed and dimensioned RAS cannot handle more loading, i.e. feeding rate, than it is rated for without reductions in water quality. For example, feeding a RAS at 1.5-times the RAS carrying capacity can produce significant water quality challenges even for the best designs. Future RAS projects must do a better job of controlling water quality in order to maintain optimal fish growth, health and welfare.

We often recommend that when producing Atlantic salmon the following criteria must be met when operating at maximum feeding capacity: low suspended solids levels (less than 5-10 ppm), relatively low turbidity, dissolved oxygen saturation >85% and total gas saturation at just below 100% (which can be achieved when a vented and low-pressure oxygen transfer device is used, such as a low head oxygenator), dissolved carbon dioxide concentration at less than 12-20 ppm (depending on life stage), nitrate nitrogen at less than 100 ppm, and water velocities of about 1-1.5 body length per second. Some of these criteria will depend on life stage and interactions with other environmental factors.

When we encounter facilities that are not meeting such criteria when operated within the RAS’s design carrying capacity, it is sometimes uncertain if such deficiencies are an operational error or a design error.

Brackish water
There are many advantages with brackish water salinities, around the isotonic point for the fish, i.e. 10-12 ppt salinity, in terms of growth, FCR, and skin health. However, there continue to be challenges created when salmonid RAS are built for use with salinities greater than about 5-12 ppt.

In the past, salmon smolt have always been produced in freshwater RAS and the farmers and suppliers have considerable experience with such freshwater production systems. In contrast, many of the RAS used to produce post-smolt and even market-size salmon are using brackish water and even full-strength seawater.

Adapting RAS to seawater has sometimes created challenges, as water treatment processes must be larger to account for reduced efficiencies in CO2 stripping, nitrification, and oxygen-holding capacity in seawater. These differences make brackish-water RAS more expensive than a freshwater RAS of similar production capacity.

In addition, bromide can be oxidized to produce toxic bromine compounds when ozonating brackish-water RAS and sulfate can be reduced to more toxic hydrogen sulfide in environments if sludge accumulates, and/or oxygen and nitrate are depleted. Particular care must therefore be placed on using high efficiency particle removal equipment, on avoiding dead-zones and on accurate and relevant sensors.

In the future we may also see RAS in which some salinity is used, to exploit the physiological effects, but where the salinity originates from addition of specific salts in low-flushing systems. Thereby bromides can be avoided and possibly even sulfates. To date, the learning curve has been steep, but farmers and RAS suppliers are getting better at accommodating these differences.

Challenges remain when implementing RAS; the devil is clearly in the details, as many RAS producers still face problems. Yet, continued government and industry support for education and training of future generations, as well as improved technologies and practices through research and development, will be critical to future success.