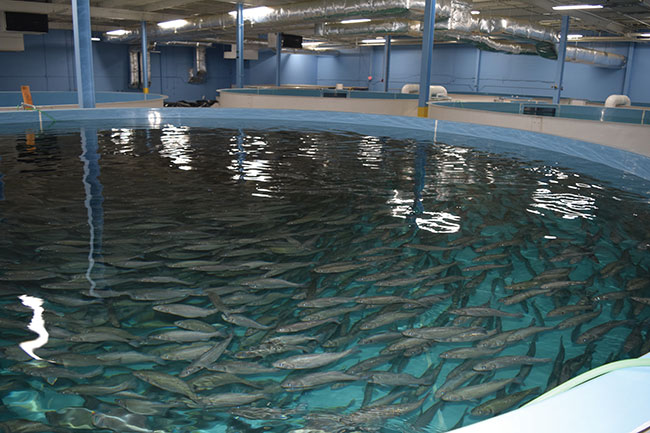 If there is one insight to be gleaned from the global pandemic that has rocked the world this year, it is the need to strengthen domestic, sustainable food production.

Fish and fish products are the most heavily traded products in the world, according to the United Nations Food and Agriculture Organization. China is the largest exporter and third largest importer of seafood globally. The U.S. imports 80 percent of its total seafood.

Undoubtedly, international travel restrictions have resulted in significant reduction in the number of cross-border flights, making a huge dent on seafood import and export – both from the supply and demand side. This has re-ignited the call for strengthening domestic food production and reducing reliance on imports.

“In general, one of the key strengths of RAS is the local production,” says Ohad Maiman, founder and CEO of The Kingfish Company (formerly Kingfish Zeeland). “It’s often been referred to only in saving the cost of carbon footprint in transport, but I also think now it’s shining a new light on local, reliable, year-round production.”

The Kingfish Company farms Dutch Yellowtail (Seriola lalandi) in a land-based aquaculture farm in Kats, The Netherlands. The RAS facility currently produces up to 600 tons of the species, with plans to expand capacity to 5,000 tons. The company is also in the permitting process to build a new RAS facility in Maine, on the U.S. east coast.

Like the rest of the world dealing with COVID-19, The Netherlands has implemented public health and safety protocols, including physical distancing, that led to the closure of many public establishments, including restaurants and bars – a huge market for seafood producers.

RAS operators, however, are finding that when one door closes, another door – and several windows – start to open. Despite restaurant closures and orders from wholesale distributors slowing down or even coming to a halt, retail and e-commerce have thrived, opening up new market opportunities for fish producers.

“When the (COVID-19) virus hit, what it did is it shun a flashlight on the fact that we, as a country, are very vulnerable – in many different areas – but especially with our food security. We’ve been forced to look at our domestic production, both on the aquaculture side and also the wild-caught (sector), and people are becoming far more aware,” says James MacKnight, sales and marketing director for Waterbury, Connecticut-based Branzino producer Ideal Fish.

Scale is key
With RAS operations seemingly immune – at least, for the time being – to the downward sales trend seen in other seafood sectors in the wake of COVID-19, perhaps the common denominator is scale. To date, much of the fully operational and commercial-ready RAS farms are on the low side of the production scale – with outputs less than 1,000 tons per year.

Aquaco Farms, which grows Florida Pompano (Trachinotus carolinus) in RAS, was just about to complete its very first harvest in April. But when the global pandemic began showing signs of prolonged economic downturn, the company’s CEO Joe Cardenas and his farming team decided to hold off the harvest for another month.

“We are somewhat in a unique position where we’re just starting – we don’t have an existing sales cycle yet,” Cardenas points out. “We’re facing the challenges without having to switch; we’re just changing gears and moving our product to a new market.”

Its first harvest was originally planned for distribution to restaurants and resorts but while those orders have decreased in light of restaurant and other closures in the food service sector, the company is finding alternative avenues for getting its pompano to market. For a small-scale RAS farm like Aquaco, which is only at a 50-ton-per-year capacity, pivoting its sales strategy is not a huge undertaking.

“There are consumers who still like good seafood,” Cardenas says. They might not be ordering it at a restaurant, they might not be getting it at the hotel on vacation, but they are either cooking it at home or they’re getting it at a take-out. You just have to change your channels, and that’s easier for some than others to do based on scale. For us, and other small or mid-size operators, it’s a lot of hard work but it’s not impossible.” 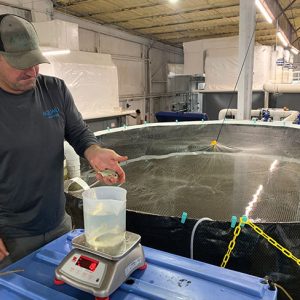 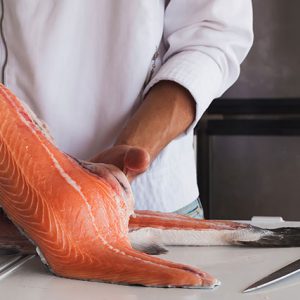 Restaurants were a big market for RAS producers, but with COVID-19-related closures they are exploring other avenues to bring their products to market. Photo credit: adobestock_Irina

Small for now, but Aquaco is full steam ahead on plans to expand its RAS production capacity tenfold to 500 tons per year, with start of construction expected by the first quarter of 2021.

The Kingfish Company is also tweaking its sales and distribution strategy, but overall the market for the high-value Dutch Yellowtail does not seem to have dwindled, just the balance between fresh and frozen produce has changed.

Kingfish CEO Maiman says the retail market for fresh fish continues to move but with the restaurant market at a standstill, some of his company’s produce are being frozen to its high-value clients’ specifications.

“We do the liquid nitrogen sashimi-grade for the U.S. so it allows us to balance between fresh sales now and build up a bit of inventory as well,” Maiman explains. He adds a key component that allowed his company to adopt to the changing marketplace is its post-harvest processing capability.

“It was very important that it caught us when we were vertically integrated, so we had the processing, packing and freezing capacity to shift immediately from fresh sales to restauranst that were in lockdown, to container loads of existing clients in the U.S. that we were struggling to supply volume for previously.”

High-value
Farming high-value species seems to have its own advantages during a global crisis, as well. While the price of salmon has dropped from around the usual $8 per kilo to nearly $5 per kilo since COVID-19 hit, the price for certain high-value crops does not seem to be affected by the market downturn.

That’s certainly true for Kingfish’s Yellowtail produce. “Price has not been an issue, but that is also our strategy,” Maiman points out. “It’s a page out of the Tesla playbook, doing Yellowtail as a model. In relative terms, this is a niche in volume and we are also on the higher end so the price relativity seems to be less of an issue.”

He adds that the challenge currently is not so much with price, but “where it is consumed and how do we get it there,” as this fish product has traditionally been enjoyed at restaurants. The company’s integrated post-harvest processing capability will allow it to process and package to market requirements – whether fresh, boneless and skinless portions, or frozen.

For Ideal Fish, which produces Branzino (Dicentrarchus labrax) in RAS, the international travel restrictions have caused the price for importing seafood to skyrocket, which in turn opened up local market opportunities, says MacKnight.

“In our case with the Branzino, the only country that’s really open for business right now is Turkey, and even though they are open to business, there is a bottleneck. They can produce as much fish as they want but if they have no way of flying that fish across the Atlantic, it’s not going to happen.”

Ideal Fish delivers its products to multiple retail chains in New York and Boston – a market that hasn’t changed despite the COVID-19 slowdown. The RAS producer also offers UPS delivery for small-volume orders for retail stores across the U.S. Most recently, the company began selling direct to consumers through Amazon and through its own, recently launched corporate e-commerce platform.

“The retail side is going off a lot because people are staying and eating at home now,” MacKnight says.

Investor insight
The effects of COVID-19 to global supply chains may have given RAS investors a bit of confidence boost on the strengths of their RAS projects, particularly the smaller scale, high-value-product operations, which seem to be thriving.

“In this climate of uncertainty towards the future, it may become easier to fund smaller, local projects, as opposed to these gigantic projects that are supposed to feed an entire country and beyond,” comments André Bravo, co-founder at UK-based investment firm Devonian Capital, which focuses on land-based aquaculture projects.

Still, in these times of crisis, some RAS operations are performing better in sales than others – and a contributing factor is product. For example, Bravo works with two companies in Portugal – one produces oysters and the other produces seabream.

“The one that’s growing oysters is deeply concerned because the oyster market has basically stopped. Portuguese oysters go to France, from France they mostly go to China, and everything is blocked at the moment so they have no sales.”

The seabream producer, on the other hand, is seeing a huge increase in demand for its product as most imports of the fish into the country have been blocked, boosting local sales. “So you can see different dynamics depending on what you’re doing and where you’re doing it,” Bravo notes.

RAS producers with niche, high-value products may be at an advantage, particularly when market prices are making an impact on profitability, says Jamie Stein, also a co-founder at Devonian Capital.

“The impact on price does remind investors that RAS projects still are more operationally leveraged than sea cage (operations),” notes Stein, citing the dropping price of salmon in Europe, for example.

“Investors are really looking at the downside scenarios. There will always be, for niche producers and producers of a really high-quality product… the ability to attract a slight premium on price, and there will also be producers who are very, very focused on pushing their prices down overtime even in a RAS environment – and those, we think, are two interesting strategies for RAS,” Stein explains.

RAS producers may be working on a slight advantage in the face of this global pandemic, but these financial experts emphasize some key strategies to ensure companies maximize their competitive advantage.

If they were selling directly to restaurants prior to COVID-19, they might now be having to start negotiating with retailers. All signs indicate to prolonged closures of restaurants or if they even open, it is likely they will be implementing physical distancing measures that will reduce occupancy for the foreseeable future. Supermarkets, on the other hand, will continue to sell fish.

According to Bravo, some questions RAS producers should be asking and answering now is: Can they sell fish to supermarkets? Do they have enough volume? Can they sell at a price which is appealing to the supermarket client?

A prolonged period of low prices, however, will be one of the biggest concerns for seafood producers, says Stein.

Related
Editorial: When the world catches a cold
Bracing for COVID-19
RAS Talk: Covid-19 and the ‘new normal’
Poll: How is your organization coping with the impacts of COVID-19?