Figure I: Laboratory Scale RAS Testing: Tank on left with high performance RAS feed and tank on right with feed not optimal for RAS

Physical characteristics of aqua feed pellets have always been important to farmers. For years, high expectations have centered around the requirements of consistent size (diameter), correct buoyance, pellet durability during transportation and handling, and longevity once placed in water, with the farmer’s eye and the fish’s consumption rate and efficiency being the top deciding factors on whether a feed’s performance was acceptable or not. These quality demands have been the measuring stick in the aquaculture farming community for decades but are now seen as insufficient due to the rapid growth and requirements of Recirculation Aquaculture Systems (RAS).

The reason for this is due to the RAS requirement of constant conditioning and filtering of water in order for the system to maintain the proper balance of oxygen, ammonia, and other water quality attributes. The water quality management systems add a significant cost to the overall operation and investment budget (up to 35%)(1) and require consistent oversight and maintenance as a troubled filter system can result in a loss of the entire tank’s fish stock.

Filters capture particles from three main sources – feces, pellet fines or pieces of a disintegrating pellet, and nutrients leached out of the pellet. The feces aspect is impossible to get away from but can be reduced using recipes formulated with creative ingredients to help bind fecal matter, allowing these particles to be more easily and thoroughly removed from the water. This key capture is handled best in the diet formulation and proper processing steps to improve digestibility. Feed or feed particles and nutrients that are not consumed must also be removed from the recirculated water and can be reduced by proper diet formulation and processing. How can these factors be controlled to minimize a negative role in RAS operations?

Recent laboratory analysis and lab scale demonstrations have highlighted the pellet integrity and leaching sources are best controlled via the extrusion processing step as well as attention to diet formulation. A wide variety of commercially available and laboratory produced floating, sinking and shrimp feeds were tested in a lab scale RAS system. Feeds were manufactured and compared from four major extrusion platforms – single screw, traditional twin screw, conical, and the newest twin screw models which utilize deep flighted screws and thermal energy for cooking. The study’s aim was to determine which extrusion platform consistently produced the feed most suited to the strict RAS environment.

The study not only looked at the long held important factors of pellet buoyancy and water integrity but went further and measured turbidity of the water at measured time intervals, as a method to measure how each product’s technical qualities would react inside the RAS, and thus have an impact on the filter and water-conditioning system. High water turbidity was indicative of pellets with too many fines and weak durability and became a key indicator for fat and other nutrients leaching from the pellet.

Results from the study show the finer and smaller internal cell structure within a pellet as one key influencer of pellet integrity and thus, water clarity. The finer and more numerous cells allow for nutrients to be more tightly secured inside the pellet which significantly limited leaching nutrients. Securing the nutrients inside each pellet has multiple benefits.  The fish consumes more nutrition with each pellet resulting in a higher feed conversion rate and allowing the farmer to capture more production profit. At the same time, the reduction of particles and nutrients in the water can reduce the load on conditioning and filtering systems, resulting in lower filter maintenance costs and less opportunity for filter system failures.

The ability of each extrusion platform to produce the finer and smaller cell structure varied significantly. Generally, feed samples made with single screw machines showed the largest and most inconsistent cell structures. These feeds often resulted in the highest level of water contamination once placed into the lab scale RAS systems. This was noticed both by visual appearance and confirmed through turbidity monitors.

The consistently top-performing feed samples were those produced on twin screw technologies which utilize deep flight geometries and allow for significantly higher levels of thermal energy to replace mechanical energy in cooking of the extrudate. These feeds showed unique cell structure development, exceptional integrity inside the water and the lowest turbidity numbers, which was easily noticeable by visual inspection of the water. This high-volume twin screw technology coupled with intense preconditioning prior to extrusion resulted in RAS feeds with desirable technical qualities. 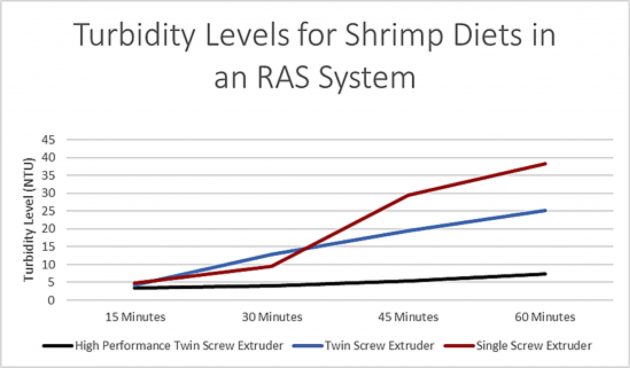 Figure II: Turbidity levels were measured over a time period for shrimp feeds made on different extrusion platforms.

The conclusion of the lab scale study is that there is significant importance on the type of extrusion platform used to produce feeds destined for RAS usage. While traditional extrusion systems have been able to supply adequate feeds to help RAS farmers develop their markets, true growth in the RAS sector will be facilitated with the highest performing feeds which supply consistent nutrients to the fish, reduce the load on conditioning and filtering systems which in turn will reduce the costs of maintaining these systems and, perhaps most importantly, mitigate the risks that occurs when conditioning and filtering systems become overloaded and RAS water chemistry becomes toxic for the fish. Advancements in feeds specifically produced for recirculating systems is a critical step in the growth and advancement of the global RAS industry.