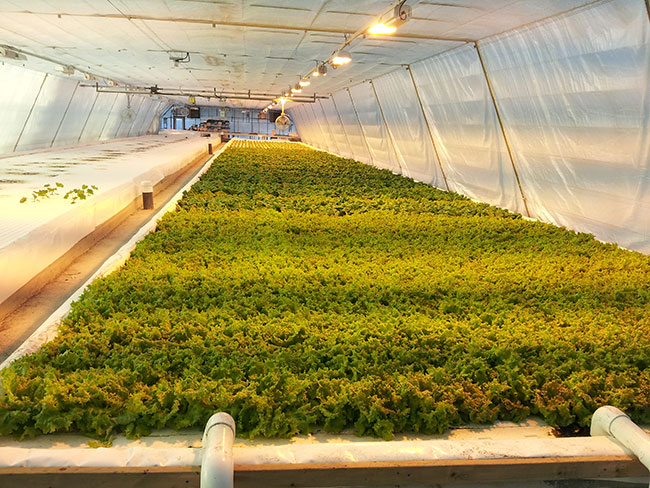 Lester’s Farm’s aquaponics facility sits on a 120-acre family land. The greenhouse grows lettuce and other leafy greens. and herbs.

The increasing popularity of RAS is paving the way for other sustainable production models to gain traction in the industry.

What used to be a “backyard hobby farming” project, aquaponics is evolving to become a sustainable – and profitable – alternative to food production.

Aquaponics blends aquaculture and hydroponics (soilless plant cultivation) and creates a natural system of producing food, without the use of artificial fertilizers or pesticides. It’s an integrated multitrophic system, mimicking the environment of a natural ecosystem, explains Nick Savidov, senior research scientist at Lethbridge College in Alberta, Canada, in an earlier interview with this writer.

“The natural ecosystem does not have waste,” he says. “Everything is getting utilized, so that waste product of one component – such as fish manure – become feed stock for another component, which are beneficial microorganisms such as bacteria, fungi, protozones, so forth… and then of course the plants are fed by the water, then the water goes back to fish. So, the cycle is complete.”

Regarded as Canada’s “Yoda of aquaponics,” Savidov has been involved in aquaponics research for well over a decade. He says one of the most important features of aquaponics is that it does not produce any waste.

“Recirculating is the key word,” Savidov points out. “Water becomes not just a habitat for plants, fish and the nutrients and microorganisms. Water becomes a carrier, a link which ties together all those components. That is why water is so important.”

Bottom-line
Any fish species that can be grown in RAS can be reared in an aquaponic system, but everything boils down to the business plan, says Ryan Chatterson, founder and president of Aquaponic Engineering and Design based in Florida, U.S.A.

“Can you line up the eggs? Can you line up the harvest schedule, and everything that it takes to do that? Can you maintain water temperature? These are all just numbers on a table: you pick the fish, you set the requirements, and then if you have to do a 30-degree change in the water (temperature) from the fish to the plants, then in that plan you add kilowatt hour. It’s going to tell you whether it makes sense or not,” explains Chatterson.

Before starting his own aquaponics farm and then launching his aquaponics engineering company, Chatterson worked for 10 years at Aquatic Ecosystems. Seeing the potential for aquaponics, he eventually set out on his own, establishing first a R&D farm in Florida serving as a test bed for his designs and to evaluate various crops in different growing conditions.

The bottom line, when selecting the species and the crops, is the bottom-line. Choose a fish that would be profitable in a RAS and that has a good market demand in the area where you are choosing to locate the aquaponics farm, Chatterson advises.

Location, location
One of the most attractive features of aquaponics, both from a sustainability and profitability standpoint, is the ability to build these farms closer to market. This eliminates the huge expense of long-haul transport and reduces the products’ carbon footprint.

In St. John’s, Newfoundland, Canada, a 120-acre family farm is reaping all the benefits of aquaponics farming, providing farm-to-table fresh produce to the local community. Lester’s Farm has installed an aquaponics system to grow lettuce and other leafy greens alongside tilapia fish.

Rearing warm water species in an area where temperatures can go down to double-digit degrees below freezing is not an easy feat, according to Wasiim Kader Bathia, aquaponics specialist and managing director at Aquaflora Aquaponics in Vacoas, Mauritius. Bathia worked with engineering firm Silk Stevens Limited, in New Brunswick, Canada, to design and install a facility that will house the aquaponics farm, including a greenhouse.

“At the time when we were designing the project, we had very few design data regarding aquaponics, especially with regards to… the design of the system itself, managing the greenhouse environment, and especially the temperatures,” Bathia recalls.

“In Newfoundland, it can get to minus 30 degrees Celsius… and we were using warm water species so we had to heat the water, heat the air inside the greenhouse and the fish building, and insulate everything.”

The farm currently uses conventional coupled aquaponics, where the fish and vegetable are produced in a single loop system. This system works well when both fish and plant species generally require the same level of water temperature, explains Onassis Sanchez, civil engineer at Silk Stevens, who worked with Bathia on the Lester’s Farm project.

“The plants require high temperature in the water and this is the main reason why tilapia was chosen because tilapia can grow at high temperatures, around 25 to 30 degrees Celsius, which is what that plants need to grow,” Sanchez says.

Some modifications have been made to the design of the Lester’s Farm system, however, to allow for future conversion to a decoupled aquaponics system, in case the farm’s operators decide to grow a different species of fish that may require lower water temperatures that may not be conducive to growing healthy plants and vegetables, Sanchez says.

Decoupled aquaponic is an integrated system that involves separate functional units for fish and plants, with individual water cycles that can be controlled separately.

The most frequently raised plants among commercial aquaponics producers, on the other hand, are basil (81 per cent), salad greens (76 per cent), non-basil herbs (73 per cent), tomatoes (68 per cent), lettuce (68 per cent) and kale (56 per cent). Other plants raised include chard, bok choi, peppers and cucumbers.

Thirty-one per cent of respondents reported that their aquaponic operations were profitable in the previous 12 months, while more than half (55 per cent) predicted profitability in the next 12 months.

Superior scale
While most commercial aquaponics operations in the world are in the small to medium-scale range, Superior Fresh in Wisconsin, U.S.A., is proving the business case for large-scale investment.

The farm sits on a 720-acre native restoration property and is the largest facility of its kind, raising Atlantic salmon and steelhead from egg to about 4 kilograms, and a variety of leafy greens.

“Right now our Atlantic salmon and steelhead production is just about 200 tons (per year), and we are between 5 and 10 times that in leafy greens, depending on what we produce,” Summerfelt says.

The company is currently adding new grow-out facilities that would expand its fish production output to 600 tons or approximately 1.3 million lbs. New greenhouse facilities are also being added to expand its production footprint to 14 acres by next year.

With continued daily harvest for leafy greens, and weekly harvest for fish, Superior Fresh is able to bring its produce to local markets within a 400-mile radius.

As the former director of aquaculture systems research at the Freshwater Institute, Summerfelt knows first-hand the power of aquaponics to produce food sustainably.

“Aquaponics is being focused on as a more sustainable production (method), and it really is because we are able to have zero discharge from our production and processing systems,” the Superior Fresh chief science officer says, adding that by having the plants remove nutrients from the water and returning clean water to the fish tanks, the farm is able to recycle 99 per cent of the water.

“That is incredible; instead of having zero waste capture from net pens, we have 100 per cent waste capture. And we are actually reclaiming it so that 1.1 tons of fish food produces 1 ton of salmon and 5 to 10 times that of leafy greens.”

Summerfelt explains the advantages of having a decoupled system – and much of it has to do with scale.

One of the significant advantages of an aquaponic system over a traditional aquaculture RAS, is that by adding leafy greens to the production output, profit margins can increase significantly. While Atlantic salmon takes two years to grow to harvest size, it only takes about seven weeks for leafy greens to grow and be ready for harvest, Summerfelt points out.

Costs and complexity
Despite its significant promise, aquaponics is still a relatively expensive investment at this point. A small to mid-size scale aquaponics farm would entail an initial investment of between $100,000 and $300,000, according to Chatterson at Aquaponic Engineering and Design. But, he adds, the return on investment can be achieved in about two to three years.

According to that 2015 survey, greenhouses are the most popular building facility used for aquaponics. However, getting the services of your friendly neighbourhood greenhouse contractor may not be as easy you think, Chatterson says.

“I find there is a lack of greenhouse construction companies,” he says. “You’d think any general contractor would be able to take that job up, but that’s not the case. I’ve been dealing with this for years now. It seems like people are scared when you say the word ‘greenhouse’ and they run the other way.”

Because of that, he says, the price of getting a greenhouse installed can skyrocket.

Sanchez of Silk Stevens Limited agrees that the most expensive portion of the initial capital cost is the physical structure. So he is an advocate of the principle of starting small and then scaling up.

“Some aquaponic systems are very complex,” he says, and that means likely sourcing materials and equipment outside of your local vicinity, which does not promote the concept of ‘buying local’ and can have a significant cost attached to it – defeating the spirit of aquaponics, says Sanchez.

“That, in my opinion, is the beauty of aquaponics – where you have local products that can be built locally, and can be consumed locally, and it can be handled and operated locally.”

For aquaponics to grow mainstream, the industry also needs to produce a fresh breed of aquaculture experts with the skilled knowledge of aquaponic systems that are specifically designed for large-scale, complex operations.

“I don’t think the traditional aquaponic training is adequate in preparation for a large, decoupled, cold water aquaponics facility,” Summerfelt says. “It’s breaking new ground in every way, and it’s not easy to implement.”

Chatterson agrees, and he is helping to build a future generation of aquaponics experts. Through his company, he has helped install an aquaponic demonstration unit at a community college in North Carolina. An upcoming project is also underway to install a similar unit in a middle school in Virginia.

“If we are going to have an aquaponics industry, we have to have people going to school and getting motivate to get careers in those areas if the industry is ever going to have long-term viability,” he says

5 Comments » for The growing business case for commercial aquaponics