October 27, 2022  By From the experts at the Freshwater Institute 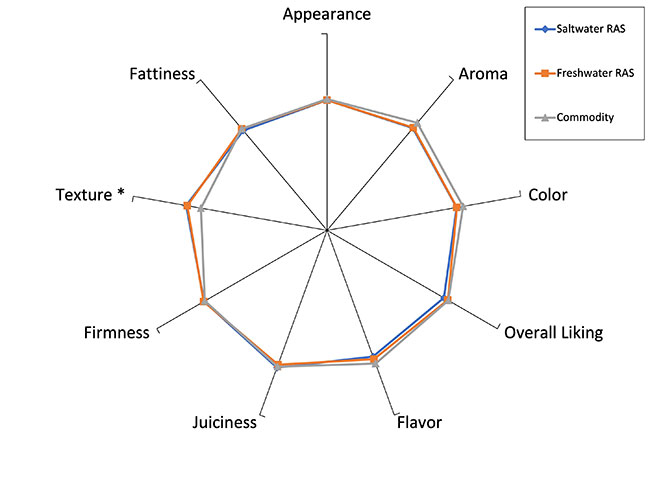 Many RAS-grown fish are marketed as local, sustainable options. While these characteristics are commonly pointed out as differentiators, how does the eating experience compare? Atlantic salmon from both a freshwater and saltwater RAS producer were compared to commodity salmon by a 100-person tasting panel of salmon users to find out.

The three varieties of salmon were obtained from a processor and shipped to a consumer sensory testing centre. Each fillet portion was drizzled with one tablespoon of olive oil and one teaspoon of course salt and baked at 400 F to an internal temperature of 145 F. All three salmon were served one by one to each member of the tasting panel in a randomized order and panelists were asked to score their liking of several attributes on a nine-point scale from “Extremely Dislike” to “Extremely Like”.

Visual appearance, aroma, and colour were judged before tasting. Scores in these attributes for the three salmon varieties ranged from 5.96 to 6.43, or the “Slightly Like” category. There were no statistical differences detected in liking between the three salmon types, however, JAR scoring indicated that colour in the two RAS produced fish could be improved to be darker or brighter.

Panelists were then asked to taste the fillets portions. Scores for the tasting attributes flavour, juiciness, firmness, and fattiness ranged from 5.97 to 6.69, which fits between the “Slightly” to “Moderately Like”. Once more, no differences in liking score were detected for these attributes.

Texture was the only attribute in which significant differences in liking score were detected, with both RAS-produced fish scoring higher than commodity salmon. Salmon from saltwater RAS (6.54) and freshwater RAS (6.49) scored between “Slightly” and “Moderately Like” while commodity salmon (5.86) scored just below “Slightly Like”. Higher texture scores from the RAS salmon suggest differences in the many factors known to impact this attribute.

Some explanations for this difference could include the effects of continuous swimming exercise on muscle tissues or shorter delivery times to processors and consumers made possible by local production. Despite this difference in texture liking, the final “Overall Liking” score was no different for any of the salmon.

After scoring for appearance and taste, panelists were asked to rate their purchase intent for each portion of salmon. All of the salmon were scored neutrally between 3.15 and 3.31 (“Might Or Might Not Buy”) with no differences in purchase intent between any of the salmon options. Panelists were then asked if each salmon fillet was produced locally, would they prefer to purchase that fillet over one produced in Norway, Chile, or Canada. Thirty-nine per cent of panelists said they would prefer the locally produced RAS fish to imported options, while 19 per cent said they would not. The final 42 per cent said where the fish was produced would make no difference.

Liking and purchase intent for Atlantic salmon grown in either freshwater or saltwater RAS were similar to each other and to commodity salmon. Fish grown in RAS had a preferred texture and this or the underlying reasons could be a differentiator for RAS grown fish.

Related
Fresh Tips: How to reduce oxygen waste in a RAS system
Fresh Tips: Disinfecting RAS with hydrogen peroxide
Fresh Tips: A remote glimpse with the help of video monitoring