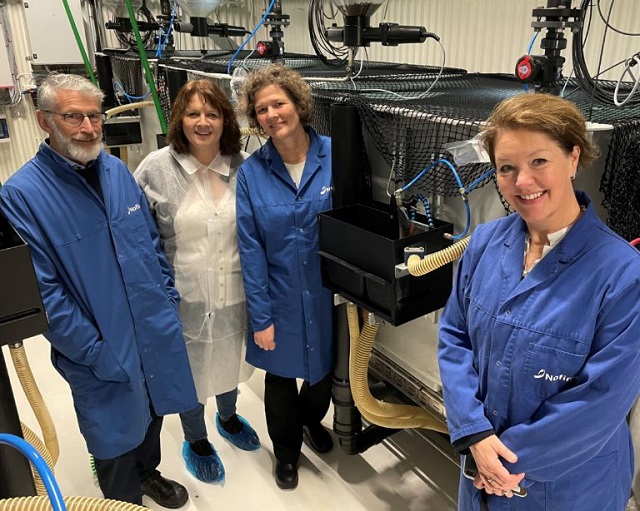 Uneaten fish feed mixed with fish feces can clog up drainage systems of land-based aquaculture facilities. Considering that approximately 10 percent of fish feed goes to waste, you can just imagine the headache this can cause most facilities. Thankfully, a team from the food research institute Nofima has joined forces with Norwegian aquaculture equipment Vard Aqua to come up with a solution.

The researchers are calling their invention the “spill box.” The device’s simplicity is not limited to its name. The spill box’s function is to separate uneaten food from wastewater so that the unused fish feed can be gathered and fed to the fish again.

“A land-based facility with a daily feed consumption of two tons normally has a feed wastage of 200 kilograms every day. It will be a very positive outcome if 200 kilograms per facility become a resource in food production, instead of going to waste,” a press release from Nofima said.

“Economy and resource utilization will be the major advantages of the spill box for industry actors”, said Kjell-Åge Rognli, director of business development at Nofima.

If the spill box can be commercialized it can “contribute to virtual zero feed waste in a land-based facility,” according to Rognli.

In farmed fish, it is much more difficult to measure feed intake and the exact digestibility of feed than in livestock. Livestock feces can be collected from the ground while feed residue can be removed from the feed trough. In aquaculture, everything gets mixed in with the water.

The research team set out to look for a way to improve feed and feces collection.

Their first attempt was to develop a separator that used centrifugal force to sort out particles. This method did work out well so the team shifted gears and tried filtration devices.

“After a while, an idea developed that something vertical had to be involved, where the water enters from the side. They found a solution that utilized the bounce in the feed pellet versus the more sticky properties of the feces. This allowed the scientists to separate feed and feces into different fractions,” according to Nofima.

With the Spill Box, the fish did not have to be handled by the user which means scientist can take more frequent samples with having to worry about harming the fish.

“We hope the spill box will make accurate measurements, and give our research technicians an easier working day, and the fish do not have to be handled”, said Nofima’s Turid Synnøve Aas, who is the project manager and one of the scientists behind the method.