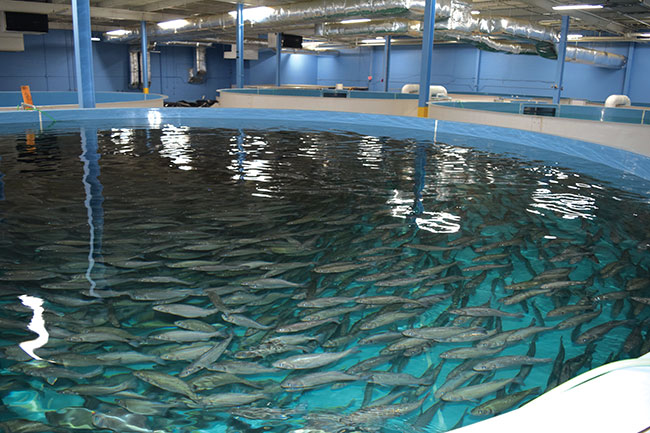 A Dutch multinational bank and financial services company is challenging the aqua feed industry to cast its nets further and invest in emerging technologies such as recirculating aquaculture systems (RAS) in order to reverse a recent decline in growth.
“Aqua feed players are well-positioned to act as investors in a number of rapidly evolving aquaculture technologies, ranging from novel ingredients to new farming techniques, such as recirculating aquaculture systems or offshore aquaculture,” according to Gorjan Nikolik, senior analyst for seafood industry at Rabobank said.
For several years now the aqua feed industry has experienced growth but there has been some marked deceleration recently.
Rabobank, which is based in Ultrecht, is a  global leader in food and agricultural banking. It’s latest report, titled “How to Succeed in Aqua Feed: The Feed Industry Should be the Driver of Change in Aquaculture,” recommended four key strategies for the feed industry, according to a post in All About Feed.
The four recommendation were:
The aquaculture industry is being rapidly transformed by technological developments. According to the Rabobank report, this is an opportunity for aqua feed companies to evolve from being just mere feed suppliers
“By (partially) transforming into aqua-technology suppliers or aqua-venture capitalists, feed companies may be able to enter the higher-growth and higher-profitability segments of the aquaculture inputs industry and drive the growth of the entire aquaculture industry,” said Nikolik.
Print this page