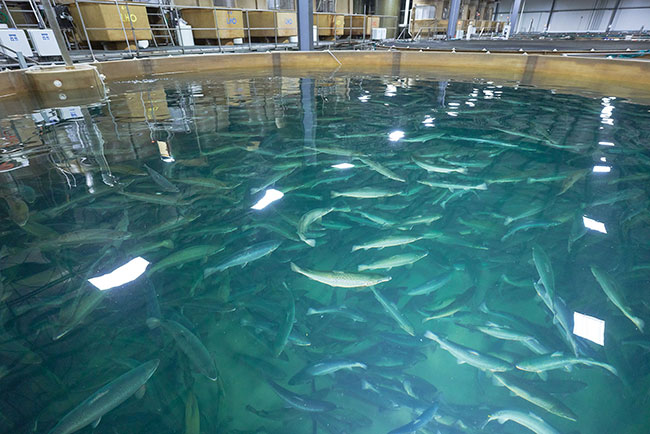 AquaBounty is gearing up to build a 10,000-ton salmon farm in Pioneer, Ohio that will likely have a price tag that is in excess of US $320 million.

“We have made solid progress towards finalizing site engineering designs and permitting since our site announcement in July,” said Sylvia Wulf, chief executive officer of AquaBounty, said in a press release today.”…“As we’ve progressed on the final design for our 10,000 metric ton Ohio farm, we have been able to further refine our expected project cost, which we estimate to be in the range of $290 million to $320 million, including a reserve for potential contingencies of $30 million.”

Wulf said hydrology studies are complete and that they confirm that the water quality in the site meets the need of AquaBounty and the local community. Measures to obtain key water and environmental permits are now underway.

AquaBounty intends to begin construction by the end of 2021. The company wants to be able to start commercial stocking by 2023.

“We are working closely with the Village of Pioneer, Williams County, the State of Ohio, JobsOhio and the Regional Growth Partnership – whose ongoing support has been invaluable in our progress,” Wulf added.

AquaBounty is also turning to its facility in Canada to augment the egg requirements in the Ohio farm.

“To support the egg requirements of the Ohio farm, and future farms, we made the decision to transition our Prince Edward Island, Canada grow-out farm operation to the production of traditional salmon broodstock, eggs and fry, in addition to our genetically engineered salmon eggs,” accoring to Wulf. “This transition is expected to occur over the next two years and increase our egg production capacity from eight million to 30 million eggs annually. There is an increasing demand for traditional salmon eggs in North America and so our increased egg production capacity is expected to supply both our own needs and create an additional revenue stream from traditional salmon eggs.”