Strong demand and declining supply have driven up prices, but can RAS stabilize the market — and when? 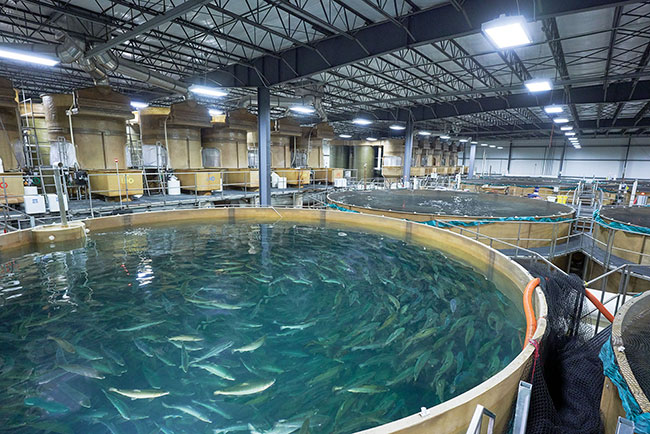 The joke about the price of seafood goes like this. A man in a restaurant looks up from his menu and asks the waiter: “The fish — will it be the market price at the time of ordering, the time of eating, or the time of paying?”

Inflation-sensitive salmon lovers may smirk as they read this. Salmon producers themselves may be all smiles after some record-setting prices, but they also know that rising production costs are no joke.

These complex sentiments, both negative and positive, reflect the volatile dynamics of pricing and profitability that have characterized global salmon markets this year. What everyone seems to agree on though, is the need for new technologies, like recirculating aquaculture (RAS), to increase a reliable, predictable supply of Atlantic salmon.

Weakening supply
Prices for farmed salmon hit 40-year highs in early 2022, according to the Food and Agriculture Organization of the United Nations (FAO), with undersupply as a key contributing factor. Production volumes for the first quarter showed supply contracted seven per cent year over year, and Kontali Analyse forecast that global supply would be negative one per cent for the full year, according to Mowi’s first quarter earnings report.

Problems for sea farmers worldwide have suppressed supply: algae blooms in Chile, dissolved oxygen drops in Canada, and biological issues like gill health in Scotland.  Researchers have also found that treatments for sea lice, particularly non-medicinal ones such as thermal delousing, contribute to mortality.

“The biggest reason why the conventional industry is not growing more is not because there isn’t high enough demand or high enough prices to justify investments. It’s because of biological issues and constraints in farming and in nature,” says Karl Øystein Øyehaug of RAS pioneer Atlantic Sapphire. “And this is what farming in a RAS system solves. We create the perfect environment without having any negative impacts, either on the fish or on environment around us.”

Alongside the challenges tamping down supply, certain “mega-trends” are driving up demand, according to DNB Seafood. In developed markets, a more educated population is eating healthier, especially as people age. In emerging markets, a growing middle class is demanding more protein, which better retail grocers are supplying.

“We are very lucky to be salmon producers in the U.S. today because there’s a huge increase in demand for the product,” continues Øyehaug of Atlantic Sapphire which chose Homestead, Fl. for its land-based “Bluehouses.” “If you look at the consumption last year, it increased by, I believe, close to 80,000 tons. To put that into perspective, our whole Phase 1, which we’re currently operating in, is around 10,000 tons.”

Persistent demand
Salmon occupies “a uniquely resilient market segment” in aquaculture because its markets, products, and sales channels are so diverse, states the FAO, pointing to consumer behaviour during Covid. When establishments in the hotel, restaurant, and catering channel, sometimes known as HORECA, closed almost overnight, consumers turned to retail and then online chefs to perfect preparing salmon at home.

“But what we’re observing now actually is that, as HORECA is opening up and regaining those volumes, the retail volumes seem to be remaining at a sticky level—boosting demand even further post-Covid, which is quite interesting,” says Erik Tveteraas of NuFrontiers, Nutreco’s corporate venture arm.

But, as inflation now pressures these same consumers and fears of recession loom, will demand drop?  Dag Sletmo of DNB, Norway’s largest financial services group, doesn’t think so. “If you look at it the last 15 years, there’s been no correlation between, say, economic growth in Europe and salmon price,” he says, adding that during inflationary periods, people in rich countries might not buy a new car, but they don’t trade down so much in what they eat.

Faltering supply and strong demand may explain why salmon prices are rising, but not how high the jump was in 2022. For that, Sletmo points to the war in Ukraine.

The Anderson Agflation Index, which was at 10 per cent before the invasion in February, surged to nearly 30 per cent in March 2022 versus March 2021. This index reflects prices for commodities such as fuel, fertilizer, and feed—the largest variable cost in salmon farming.

Projections are that agflation is likely to remain high for the rest of 2022—at least.

AquaBounty’s advantage
That’s keeping salmon producers like Sylvia Wulf, CEO of AquaBounty, keenly focused on the costs of operating a RAS facility — which are substantially different from those of ocean farmers. She ticks off line items on the company’s profit and loss statement faster than most people recite their kids’ names.

“When we look at the variable cost to raise salmon to harvest weight, feed is obviously the largest percentage of the variable costs, closely followed by energy. Though we haven’t seen dramatic increases in energy costs, we’re watching that very carefully. Oxygen is another component of variable cost and that been affected by rising transportation costs,” Wulf says, adding that supply chain pressures have also driven up packaging costs.

But revenue is also up for AquaBounty, which sells on a week-to-week basis, negotiating off of salmon market commodity prices. Higher prices are helping to offset some higher feed and packaging costs, Wulf notes.

AquaBounty, which currently harvests salmon at RAS facilities in Indiana and Prince Edward Island in Canada, continues to receive orders for the entire output of its farms. Though that production is still low (133 tons), it grew 46 per cent in the first quarter versus the previous quarter. Wulf is now deep in pre-construction planning for a new Ohio facility, which will produce 10,000 metric tons.  The company is on track to stock salmon eggs in late 2023.

In an inflationary environment, AquaBounty stands to benefit from its genetically-engineered Atlantic salmon: it needs 25 per cent less feed to produce the same harvest weight, according to the company’s website. 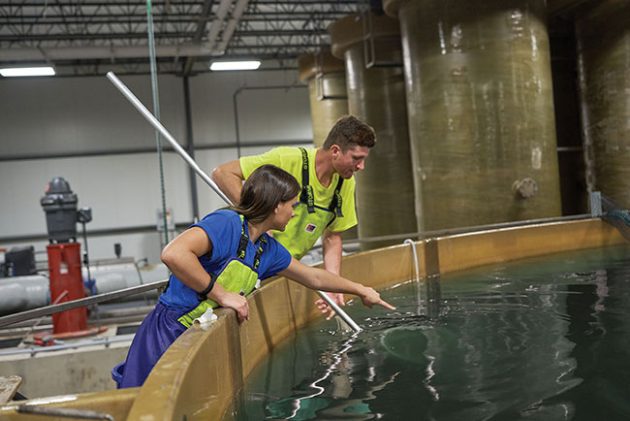 Atlantic Sapphire signals price increase
U.S. consumers have been buying Atlantic Sapphire’s Bluehouse salmon since September of 2020, with products now in over 2,000 grocery locations at chains, mostly in the Southeast.

“We’ve actually been selling our premium fish at a very consistent level since we started the harvest,” says Øyehaug. As a typical retail example, he cites US$15 per pound for Bluehouse salmon versus $7 to $13 for what he calls “commodity salmon.”

But now that difference has narrowed and Øyehaug, who serves as Atlantic Sapphire’s chief financing officer and managing director, anticipates a price increase for Bluehouse salmon.

“In the high-inflation environment we’re in, where basically all food is more expensive due to the fact that producing the food is more expensive, we also expect our price achievement will come up by year end,” he says. In addition to increased production costs for feed, power, and labour, he says the company’s budget for capital expenditures is also “under pressure” due to increasing construction costs.

More infrastructure, higher volumes
At both Atlantic Sapphire and AquaBounty, the focus is on increasing production.

“We expect to have a fully stocked farm toward the end of the third quarter, which means in Q4, we should be at full production—and black numbers,” says Øyehaug. “I can say with certainty that every single dollar that Atlantic Sapphire is going to make in the next three years is going to be reinvested into more growth.”

And this resolve does not waver as he acknowledges the production setbacks that Atlantic Sapphire has experienced along the way. “For any salmon farmer, there are always risks of losing fish,” he says. “But the job is to minimize the frequency of events and the consequences.”

To achieve the growth that will fortify global supply, Tveteraas at NuFrontiers also suggests that RAS players take a cue from conventional farmers and share best practices. “It’s one of the things that made the Norwegian aquaculture sector so successful in the first place,” he says. “I think that will benefit the sector as a whole, as opposed to each and every RAS operator guarding best practices as if it’s the Holy Grail.”

During the last three years, NuFrontiers has invested in RAS projects worldwide, including China, Japan, and the US.

While other investors may be waiting for RAS producers to achieve higher volumes, the compelling opportunity now is that the imbalance between supply and demand has only increased over time. That’s likely to continue.

“I would be doubtful to see conventional supply globally go anywhere above two per cent,” says Tveteraas.

“The general view is that demand growth may be, say, five per cent per year. Supply will grow more slowly than demand — at least not faster. And it looks like this will be the situation for the next decade,” says DNB’s Sletmo.

“It is a very robust market and that’s why the prices are so high. And that’s also why the reward for starting a RAS operation will be so high — if people succeed in doing it at a reasonable cost level and in big volumes.”