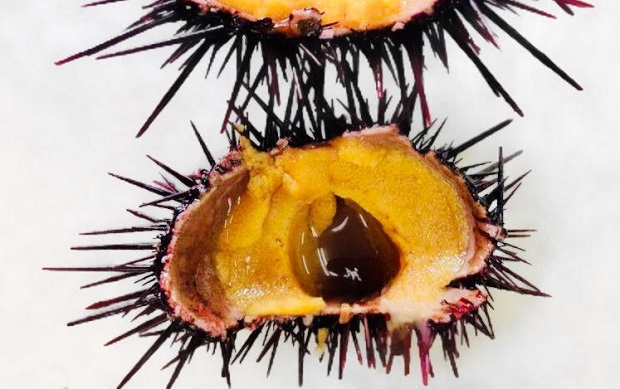 Coastal kelp forests provide fertile breeding grounds for various species of fish and other organisms. Unfortunately, many of these marine habitats are disappearing faster than rainforests. Sea urchins are partly to blame.

They feast on the kelp until an entire area is down to bare rock. After gobbling up the food around them, the sea urchins starve and become empty. In this dormant stage, the barren sea urchins have no economic value for fishers and contain little nutrients for predators.

Mammals and natural fish predators helped keep sea urchin populations in check. But due to overfishing, much of the natural predators have disappeared and this has allowed sea urchins to overgraze.

Urchinomics, a Japanse aquaculture company believes it has a solution for stopping the ecological devastation caused by sea urchins. While sea urchins may be considered environmental pests, they are also one of the world’s most highly prized seafood delicacies. Sea urchin roe, known as uni, sells more than $300/kg. Uni is described as having a buttery, sweet and briny flavour. The Japanese alone consume about 50,000 metric tons of sea urchin each year.

“Urchinomics’ purpose is to rehabilitate unhealthy oceans into healthy ecosystems for the benefit of our planet and humanity,” according to the company. “We do this by removing overgrazing sea urchins and helping nature turn a barren seafloor back into a vibrant kelp forest.”

The removed sea urchins are ranched in land-based farms and later sold as premium seafood to restaurants around the world.

Urchinomic has sourced a specially formulated feed made with sustainably harvested, umami-rich kombu (kelp). The feed is used to grow the roe inside the barren urchins in land-based facilities and sea cages.

Norwegian-based aquaculture, and food research institute, Nofima, has developed a plant-based, hormone-free feed that can revive the barren and dormant sea urchins and commercially viable again.

“We are currently in the final phase of this development and are fine-tuning the flavor profile to meet the expectations of the finest chefs around the world,” a press release from the company said.

“By understanding and aligning new economic incentives and further improving our technologies, we can remove the overgrazing sea urchins and turn them into luxury gourmet seafood,” according to Urchinomic. “By doing this we simultaneously help to restore kelp forests, encouraging fish and marine biodiversity and CO2 sequestration.”