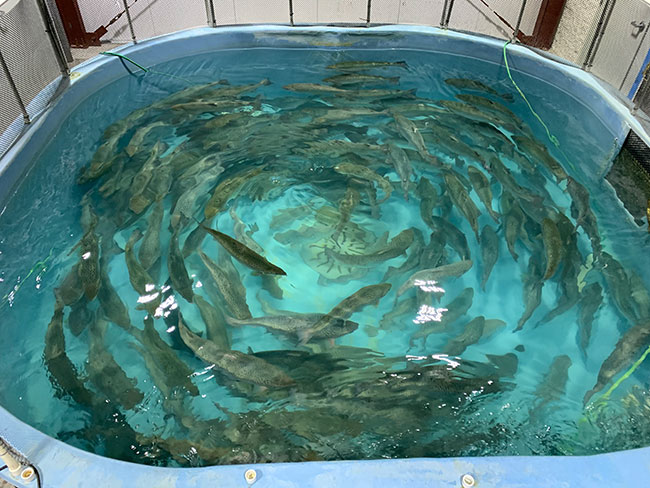 Research scientist John Davidson presented FWI’s latest findings on April 14 at the Aquaculture Europe 2020 virtual event. The study found that increased water flushing and HRT rates of 2.4 to 4.6  hours within a 10-day period showed the lowest residual levels of geosmin (GSM) and 2-methylisoborneol (MIB) in water and fish flesh. Both are common off-flavour compounds that contribute to the earthy, musky taste that consumers do not like.

“Obviously, the holy grail would be to develop technologies and strategies to eliminate off-flavour in the primary RAS and not need depuration,” said Davidson during his virtual presentation.

“However, I don’t think we’re at a place currently where we can have full assurance that these newer strategies can always reduce and remediate off-flavour from fish in the immediate RAS. So we need more research.”

In the study’s first trial, market-size Atlantic salmon originally cultured in a semi-commercial scale freshwater RAS tank were moved to a separate system and exposed to a concentrated GSM and MIB levels to boost concentrations before the trial.

The fish were then randomly stocked in 12 partial reuse sytems (PRAS) which had been cleaned and pre-disinfected with 250mg/l hydrogen peroxide. Three flushing rates were applied to randomly selected PRAS which resulted in mean system HRTs of 2.4, 4.6, and 11.3-h.

Higher waterborne GSM levels were detected in tanks that operated at 11.3-h HRT than those in 2.4 and 4.6-h. Similar results were also observed in fish flesh.

A second trial was carried out but with a two-by-two factorial design evaluating the effects of dissolved oxygen concentration and fish swimming speed created by adjusted water velocity on off-flavour remediation.