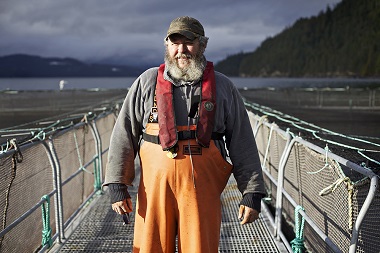 The Liberal Party’s plans to replace British Columbia’s open pen salmon farms with recirculating aquaculture systems (RAS) fly in the face of a yet to be released report which favours hybrid facilities that integrate open sea and land-based operations. A statement released by the BC Salmon Farmers Association also said that the plan’s five-year time frame is “unachievable.”

This was the reply of the BC Salmon Farmers Association to the announcement made on Sunday by Canadian Prime Minister Justin Trudeau. Trudeau released details of his party’s in an 85-page document tiled, Forward – A real plan for the middle class. The document also indicated that the party intends to replace B.C. ’s open net pens with land-based salmon farms by 2025.

The plan was labeled as “destructive and careless” by John Paul Fraser, executive director of the salmon farmers’ association.

In a statement released a day after Trudeau’s announcement, Fraser also said that the salmon farming industry is collaborating First Nations, non-government organizations, and various levels of government to push innovation.

“And part of these discussions is a conversation about the growing trend of hybrid systems – which integrate land and sea-based systems – as a strong ‘made-in-B.C.’ step forward,” he added. “In fact, a draft report commissioned by the Minister that is being deliberated by the working group concludes that ‘the new technologies discussed in this report, as well as conventional net pen systems, will all play a role in contributing to global production of salmon products’.”

Fraser also pointed out that while closed-containment systems have been successful in small scale operations, “no one in the world has successfully raised a large number of salmon in a commercial-scale land or sea-based closed containment operation.”

“The technology is currently developing and we certainly anticipate closed containment systems will play a larger role in the future,” he added. “But to forcefully mandate a five-year ‘transition’ is unachievable, especially when there is no business case or transition plan behind it. This is a recipe for industry stagnation and significant unemployment.”