Land-based tilapia farm in the U.S. Midwest turns to its agriculture roots 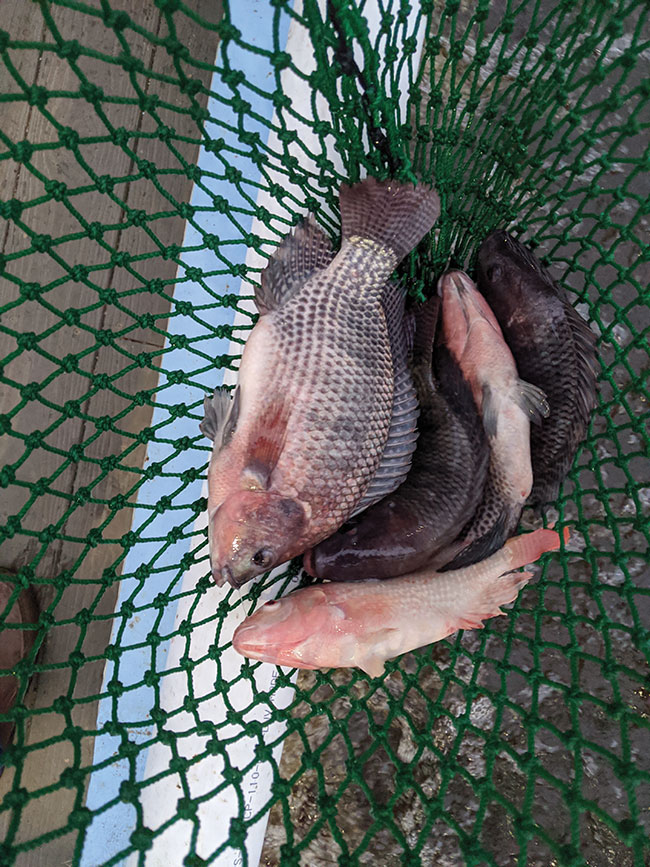 Tilapia farming is one of the most established methods in the industry. Doing it exclusively on land takes tilapia production to a whole new level.

Twenty-eight-year-old Joe Sweeney comes from a family of farmers. He knows a thing or two about raising cattle, horses, pigs, and growing corn and soybeans. Today, he’s raising a different kind of livestock – tilapia (Oreochromis niloticus) – and he’s doing it in the middle of rural Iowa, in the U.S. Midwest.

“We started Eagle’s Catch in 2016,” says the young CEO. “We’ve built one of the largest indoor fish farms in the country. Previously, folks on our team have built or managed five farms across the country, so we are taking a lot of the lessons that we’ve learned in building, raising tilapia and selling tilapia and applying it to Eagle’s Catch.”

The farm, which sits on nearly four acres of greenhouse-covered land, shipped its first batch of harvest in 2019. This year, Eagle’s Catch is looking to expand its operations and increase output to three million pounds of harvest-size tilapia per year, shipping them domestically to as far away as New York.

“Indoor fish farm is really the best approach for us. We are able to produce fish consistently on a year-round basis, and be able to service our customers to the highest degree of quality and consistency possible,” Sweeney says.

Iowa’s agricultural history is vast. The state is well-known as a major producer of food commodities and recognized globally for cutting-edge food production technologies. Among its major produce include soybeans, corn, cattle, pork and eggs. Farming tilapia alongside some of the biggest sources of protein products and run by the most experienced agricultural producers seem to make sense – especially to Eagle’s Catch’s early investors.

Species of choice
The market for tilapia in the U.S. is dominated by imports, with China and Taiwan as the primary source of these imports. Only about five percent of tilapia sold in the U.S. are produced domestically, according to aquaculture network resource site Aquatic Network.

The ongoing U.S.-China trade conflict, which led to a 25-percent tariff on Chinese imports, has lessened China’s competitiveness as supplier to the U.S. According to the Food and Agriculture Organization of the United Nations, tilapia imports have been one of the most heavily affected by the tariffs that began in 2018. These market forces and the strong sustainability story of farming aquatic species on land, closer to the market and with reduced environmental footprint – all make a good business case for a commercial RAS farm.

The choice to farm tilapia on land was not a difficult one for Sweeney and his partners. It has a long history as a farmed species, high consumer awareness and acceptance with its generally mild flavour, and a relatively short production cycle – it only takes between seven and nine months for them to reach harvest size of about 1.5 to 2 lbs. There is also the potential for increasing domestic production and relying less heavily on imports to supply the increasing domestic market demand.

“The reason why we are looking at recirculating aquaculture system is we are producing tilapia,” explains Sweeney. “They’re not going to survive in Iowa winter (with traditional farming). In many cases, people are worried about escapees. If fish escape our facility – which they physically are unable to – there is no way they would survive in our natural environment. Indoor fish farm is really the best approach for us.”

Facility
Eagle’s Catch’s RAS farm is located in Ellsworth, Iowa, with a population of just over 500 people. The facility sources its water from a 30-year old well. Sweeney says his team decided to tap into an existing well rather than dig a new one to ensure the best and most consistent water conditions.

“In Iowa we are very, very fortunate to have a large quantity of water as well as quality water. One of the lessons that we learned was to not dig a new well, because the water quality can be highly variable especially in those first years of operation. So, we said we needed to use an old well so we moved in with the city of Ellsworth, Iowa,” Sweeney explains.

The system runs somewhere between two and three million gallons of water at any given time. As much as 99 percent of the water is recirculated and re-used. Iowa’s groundwater is naturally cold and contains a high amount of iron, Sweeney explains. With tilapia being a warm water species, the water needs to be warmed, and the iron stripped from it before it enters the tanks.

The farm has been built in a greenhouse infrastructure. Sweeney says the greenhouse proved more effective than an enclosed, concrete, indoor RAS farm.

That decision came about as a lesson from a past experience. “Previously I built a farm close to there and we built it in a different type of structure, and we had all sorts of moisture issues. And we knew that there was no way to really contain those moisture issues and we arrived at deciding to move into a greenhouse,” Sweeney says.

The greenhouse was also ideal for other reasons, he adds. For instance, it’s cheaper to build, on a per-square-foot basis. It is also a lot faster to build. The ability to harness natural light and natural heat in a greenhouse is also an advantage, particularly for a warm water species like tilapia.

“If you look at the heating and infrastructure needs across the years, across the seasons, the couple of months out of the year where we’re dumping heat into that greenhouse system, but as a yearlong average it’s actually beneficial to us to have it in a greenhouse versus a more tightly controlled building,” the Eagle’s Catch chief executive says.

The facility uses raceway tanks, which was developed with a number of aquaculture and technology experts, Sweeney says. He adds the raceway tanks made sense for them – over circular tanks – as it better optimizes square footage in the space, and they just find it provides easier access for fish handling.

Around 24 raceway tanks are currently in operation, with each tank containing about 52,000 gallons of water. At full capacity, the RAS farm will be operating 48 raceway tanks with capacity to produce up to five million pounds of tilapia, according to Sweeney. 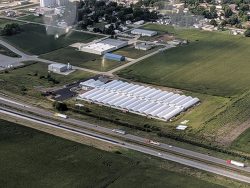 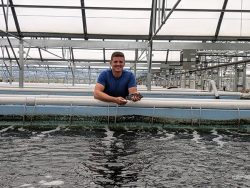 Eagle’s Catch CEO Joe Sweeney comes from a family of farmers in the Midwest.

Cost analysis
Nearly 40 percent of Iowa’s net electricity generation comes from renewable sources, and most of it is from wind energy. Eagle’s Catch benefits from the state’s renewable energy source allowing it to have lower energy cost in its operations.

“We’re also close to major energy hubs there in North Dakota and other places. So from an electricity standpoint we are very, very competitive in our area, and we’re fortunate to be able to draw onto that. That’s a major strength for Iowa and for our company,” Sweeney says.

Sweeney wants to see feed manufacturers consider Iowa and the U.S. Midwest as a location for expansion, which would help fish farmers significantly lower its costs.

“We want to make sure we’re getting the best nutrition (for the fish), and we are highly encouraging each of these feed companies to seriously consider the Midwest as a source for growth because we make all the ingredients right there in Iowa. We are major producers of a lot of commodities and a lot of animal agriculture and grain agriculture. We want to be able to draw on the things that we’re already doing in Iowa and grow that,” Sweeney says.

Growth plans
Having successfully completed its first harvest in 2019, Sweeney says the focus now is to scale. The company hopes to expand its operations and reach its RAS facility’s full capacity of running 48 raceway tanks and producing five million pounds of tilapia per year.

The farm currently buys its tilapia fingerlings from AmeriCulture in New Mexico, U.S.A. Sweeney says there are no immediate plans to establish a hatchery for Eagle’s Catch, but he is not discounting the possibility, either.

“Anybody that scales is going to have to think about that someday, but we want to make sure that we’ve got the right partnerships from a genetics perspective,” Sweeney says. “As we look at the future of the aquaculture industry and the things that we can do applying modern breeding practices – much like AmeriCulture as well as other various institutions in aquaculture have done – we think there’s a lot of opportunity there. We want to make sure that we’re working with the best of the best in terms of developing the genetic potential of not only tilapia but many other species.”