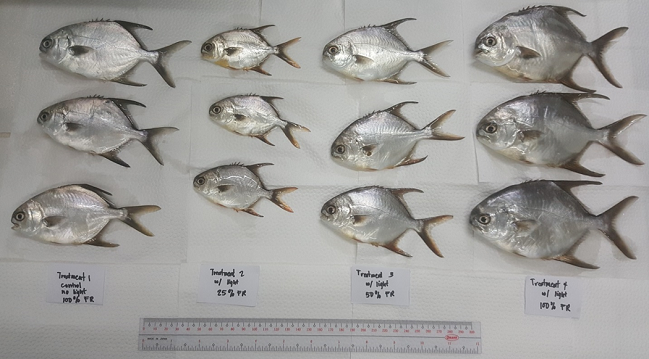 Pompano that received 100 percent feeding rate in lit cages (rightmost) grew the most, even compared to fully fed pompano that did not receive artificial lighting (leftmost). PHOTO BY MIC LEGASPI

For humans, switching off the lights is one of the key elements of a goodnight’s sleep – and hopefully a healthy fresh start in the morning. Not so for some fish species it seems, according to the findings of a research carried out by the Southeast Asian Fisheries Development Center/Aquaculture Department (SEAFDEC/AQD).

Keeping the lights on, even at night, can help young pampano fry grow faster, according to SEAFDEC/AQD associate researcher, Ma. Irene Legaspi.

Pampano (trachinotus) is a high-value fish in many Asian countries such as the Philippines. The species is prized for its firm and flaky meat that has a mildly sweet flavour. The pampano is typically cultured in ponds, as wells in open sea and brackish water cages.

According to Legaspi, illuminating the cages of pampanos during their nursery phase helps the fish better see their natural prey.

Pampano feasts on mostly tiny crustaceans called copepods which float near the surface of the water. Natural food, as opposed to artificial feeds, is better for pampano larvae, said Legaspi.

With the lights on, juvenile pampano are able to eat through the night, thus improving their growth and survival.

Researchers found that, pompano that received artificial light achieved higher body weight compared to pompano not provided with lighting. Results also revealed that pompano receiving 25 to 50 percent less artificial feed, but provided with artificial illumination, gained as much weight as fully fed pompano with no illumination, according to a post in the SEAFDEC/AQD Web site.

This means that feed cost can be reduced by as much as 50 percent, said Legaspi.

Previous studies have also shown that illumination not only helps fish see their prey. However, the copepods are attracted to artificial light, between 180 and 300 lux, and instinctively flock right where the young fish can see them.