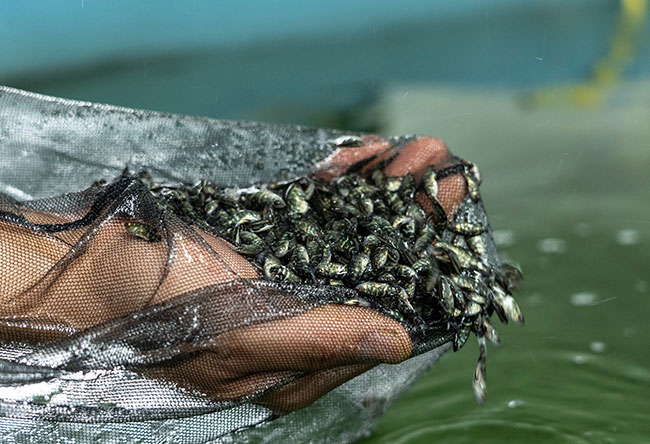 If you happen to talk with Mordi Laloush you’ll get the idea that he believes recirculating aquaculture systems (RAS) and barramundi (lates calcarifer) are a match made in heaven. Except in the case of the chief executive officer of Aquatech Fisheries, it would be more like a match made in the dessert.

The barramundi is also known as the Asian sea bass. The fish is prized for its tasty white meat. It’s fished and raised in aquaculture systems in Australia, Singapore, Malaysia, Thailand, the Philippines, Vietnam, Indonesia, Saudi Arabia, Poland, The United Kingdom, the United States, and Israel.

Aquatech runs the only large-scale inland fish farms raising barramundi in a strip of Israel’s Negev Dessert bordering the Gaza Strip and the Mediterranean. And the operation is thriving.

The company made deliveries of about 800 tons of barramundi in 2020 despite dealing with the challenges of the COVID-19 pandemic.

In 2012, Aquatech commissioned AquaMaof to design and build a RAS plant that would have an annual production of 1,925 tons of seabream. Since sea bream need saltwater to survive, the facility needed to have high salinity. It also needed to have near zero discharge because there were concerns that the saltwater run-off could contaminate the aquifer water.

Unfortunately, the system was unable to deal with the scale of biomass produced. High nitrate concentration killed off hundreds of thousands of sea bream, according to Laloush. In two years, Aquatech managed to harvest only 153 tons of sea bream out of the 1.3 million fingerlings which the company seeded.

“We decided that if we can’t grow sea bream, then we had to find out what fish would work,” says Laloush.

Aquatech conducted tests with several other species such as striped bass and mullet. In the end, the company decided to switch to barramundi.

Hardiness and productivity are key factors for RAS operators considering barramundi, according to Spencer Gowan, general manager of Great Falls Aquaculture, based in Turner Falls, Massachusetts. The company bought the farm from Australis Aquaculture in 2018 when the latter pulled out of the barramundi industry in the U.S.

Great Falls is currently the biggest barramundi grower in the U.S., according to Gowan.

“Barramundi is well-suited for RAS because the fish performs very well in high-density environment,” Gowan explains. “Fish pay rent. The longer they stay in the tank the more you feed them and spend money on them.”

Barramundi is farmed in RAS facilities using freshwater of brackish water systems, and a combination of physical and biological filtration.

Another advantage is that barramundi can reach harvest size – 350 grams to 3 kilograms – in six months to two years.

A single female barramundi may produce 30 to 40 million eggs. This means farmers will only need small numbers of broodstock to obtain enough larvae for a large-scale hatchery operation. 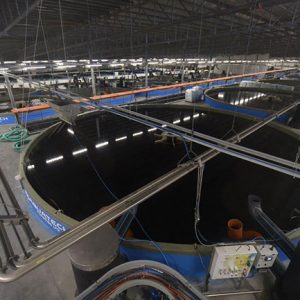 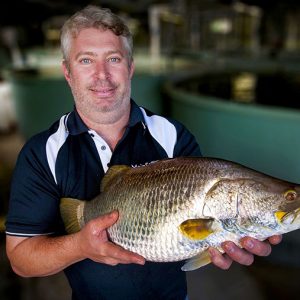 Market appeal
The growing demand for sustainably produced, healthy food is one of the drivers of the growth of the aquaculture industry.

In the case of barramundi, it helps that the fish has a flavour profile that –appeals to a wide swathe of consumers.

“Barramundi meat is quite sweet, and it doesn’t have the fishy (taste) that turns off some people,” says Gowan. “It’s the kind of fish that even people who don’t eat fish would enjoy.”

The absence of any over-powering flavour also make barramundi a very versatile fish that’s “great for the backyard grill or as a gourmet dish,” adds Gowan.

Then there’s the omega-3 content. Compared to salmon, the barramundi has a higher ratio of omega-3 to fat.

What’s in a name?

The name barramundi originated from the Australian Aboriginal word for “large-scaled fish.” The genetic differences between the Asian sea bass and barramundi are not big enough to consider the two distinct species.

However, in the 1980s, the name barramundi was ascribed by Australian growers to their fish, to differentiate from those grown by other countries.

Dr. Paul Harrison, co-founder of Mainstream Aquaculture, explains that buyers of barramundi have come to associate the fish with the regulated Australian barramundi aquaculture environment geared to producing quality fish.

The Queensland-based Mainstream Aquaculture is one of the largest producers of barramundi in Australia. The company also provides approximately one-third of the world’s supply of barramundi seed which it exports to 25 countries.

“They come from South Asian countries such as Vietnam, Indonesia and Thailand. Often produced in subsistence farms in villages where there are likely lower standards,” says Harrison. “If barramundi is labelled as premium, then it is sold as premium. But if barramundi is lumped with Asian sea bass its status suffers.”

That’s why robust marketing and continuous education of consumers, chefs, food trend influencers and buyers are vital, he says.

Lessons learned
Despite these advantages, raising barramundi is not a piece of cake, says Sasha Dyer, fish health manager at Great Falls.

According to Sasha, barramundi growers should watch out for several key factors:

“High CO2 levels tend to make fish lethargic and sick,” says Dyer. “If their metabolism is low, fish tend to bloat. This means food will literally rot inside them and kill them slowly.”

Barramundi are predator fish. During the early stages of growth, larger, more aggressive barramundi will feed on their smaller counterparts.

“Grading takes a lot of time. But we grade our fish once a week when they’re small and gradually ease down as they grow bigger,” says Dyer.

The great white hope
Back in 2001, when Mainstream started its land-based RAS operation, the company began raising different species such as Murray cod, golden perch, and barramundi.  But things started to take off for the company when it decided to concentrate on barramundi.

Salmon is a global aquaculture success story. However, the market for a farmed white fish remains wide open and full of opportunity.