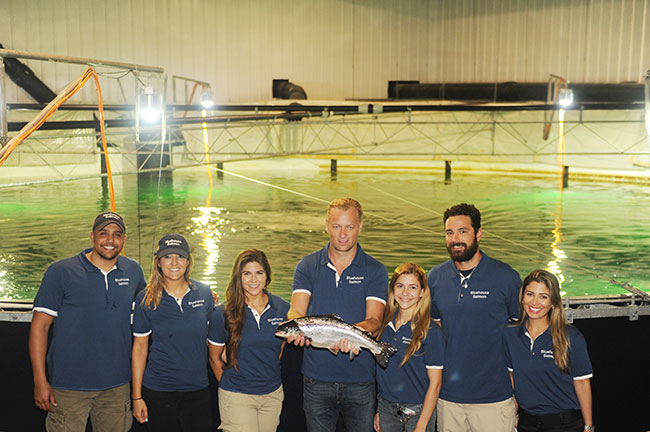 Atlantic Sapphire CEO Johan Andreassen, with his team at the Bluehouse facility, holding up a harvest-size salmon during the company’s first harvest event in September 2020 (File photo: Atlantic Sapphire)

A week following the loss of some 500 tons of salmon at its Florida land-based facility, Atlantic Sapphire announced it is shaking up its organization.

“Following a challenging start to 2021 for the company, which has involved operational disturbances and elevated mortality, especially tied to fish movement issues, smolt facility and the loss of biomass on March 23, 2021, we are making organizational changes to the U.S. operation for increased efficiency and reliability,” said Johan E. Andreassen, chairman and chief executive officer of Atlantic Sapphire USA .

In a press release today, Andreassen announced that he is tapping Bjørn-Vegard Løvik to join Atlantic Sapphire as the company’s interim chief operating officer.

Løvik will replace Dharma Rajeswaran who has been Atlantic Sapphire’s COO since 2017.

Løvik is chief executive officer of investment firm Alsco AS which was founded by the Andreassen and Løvik families. Løvik is also a co-founder of Atlantic Sapphire.

Løvik, who has significant experience in the salmon farming industry and the broader seafood industry, will be reporting to Andreassen, “as part of a restructuring of the organization to improve transfer of information, knowledge and accountability,” the press release said.

“I am therefore very pleased that Mr. Løvik will join us here in the U.S., bringing over two decades of salmon farming competence into the team. Mr. Løvik and I have been working together since we entered the fish farming industry, and I personally know that his experience as a fish farmer is unmatched,” said Andreassen.

Last week, the company reported that elevated gas levels due to a RAS design flaw could be the cause of the mortalities in its Miami Bluehouse facility. Atlantic Sapphire said it was in the process of correcting the flaw just before the incident occurred.

In 2020, Atlantic Sapphire’s Denmark facility reported massive mortality at its grow-out system in Hvide Sande in Denmark, affecting more than a quarter of a million fish.