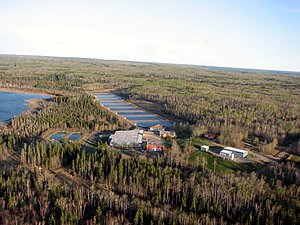 The provincial government of Alberta is investing a total of $10.3 million to install a new recirculating aquaculture system (RAS) and other key upgrades to modernize a 34-year-old province-run hatchery.

The program is meant to support jobs and stimulate the economy in Alberta, which is one of the Canadian provinces hardest hit by the COVID-19 pandemic.

“Alberta’s government is taking action now to get folks back to work while ensuring our province can continue to grow in the years to come. Stocked fisheries generate more than $166 million in economic activity each year in our province,” said Jason Kenny, premier of Alberta. “Investments in provincial fish hatcheries support the significant economic role fishing has in the province – and will get Albertans back to work.”

This project is part of the more than $10 billion infrastructure spending announced as part of Alberta’s Recovery Plan.

Funding for the Cold Lake Fish Hatchery upgrade project includes $7 million from Environment and Parks for construction of the new RAS and associated infrastructure and $3.3 million from Alberta Infrastructure for installation of a new oxygen generator and replacement of the hatchery’s water headbox, metal roof and motor control systems.

A new RAS will generate a positive return on investment through significantly reduced utility costs, and modernizing the operating and mechanical systems will improve efficiency, a press release from the province said.

The Cold Lake Fish Hatchery produces about 840,000 trout per year, including rainbow, brown, tiger, and brook trout, with a total fish weight of about 65,000 kilograms. It is also the province’s only walleye aquaculture facility.

The Cold Lake Fish Hatchery was built in the province’s northeastern city back in 1986. The city of Cold Lake is in Alberta’s “lakeland” district.

The Cold Lake Fish Hatchery uses a flow-through method to take water from Cold Lake. The water is heated and treated and used for the fish hatchery operations.

The provincial fish stocking program stocks about 2.1 million trout per year into about 240 water bodies throughout Alberta.