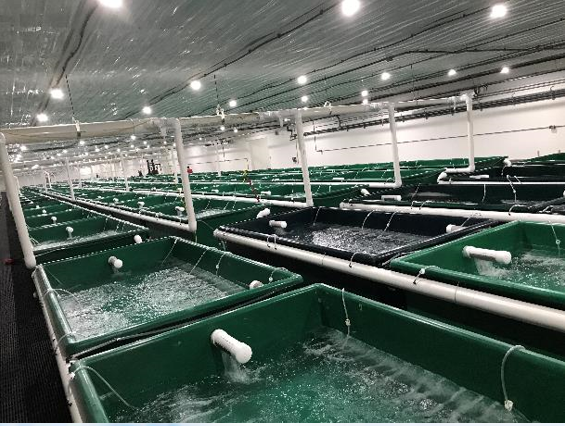 NaturalShrimp, Inc., has signed a letter of intent (LOI) for the acquisition of assets of Iowa-based barramundi farming company Alder Aqua. The transaction is valued at $10 million, NaturalShrimp has announced.

The Texas-based RAS shrimp producer hopes to use Alder Aqua as a platform to expand its recirculating aquaculture system (RAS) for shrimp operation.

The purchase cost will consist of a $5 million down payment, and notes due in 36 and 48 months. NaturalShrimp expects the acquisition to close in the fourth quarter of 2020, a press release said.

“The NaturalShrimp team has been working with employees and consultants of VeroBlue Farms since the second quarter of 2018,” said Gerald Easterling, CEO of NaturalShrimp. “Although the facility was originally designed for Barramundi, it complements our RAS technology for shrimp, making our company poised for expansion in the future.”

The LOI covers the real property, equipment, tanks, rolling stock, inventory, permits, contracts, customer lists and contracts and other such assets used by Alder Aqua. The company’s facilities located in Blairsburg and Buckeye, Iowa, are also included in the transaction.

“The VeroBlue Farms facility already has in place 240 10,000-gallon tanks along with the systems and infrastructure previously used for fish production,” according to Tom Untermeyer, chief technology officer of NaturalShrimp. “This will expedite the process of converting it to a shrimp production facility using our patented electrocoagulation system technology.”