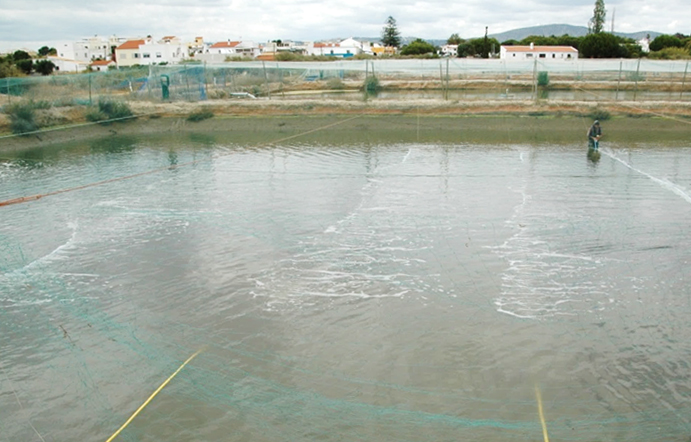 AirX diffuser hose deployed in an earthen pond. The yellow supply hose connect the submerged diffuser to the pump manifold. Henrik Grundvig from the Teknologisk Institute in Oslo

Dissolved oxygen (DO) is a major limiting factor in aquaculture and sub-optimal levels may limit production. At the 10th International Conference on Recirculating Aquaculture held recently in Roanoke, Virginia, Henrik Grundvig from the Teknologisk Institute in Oslo, Norway and his colleagues described a new low-pressure air diffuser system for outdoor ponds and raceways and tanks in large recirculation systems.

The AirX project is based on a concept, patented by the Norwegian company Oxyvision. Most of the technical development and lab-scale tests are taking place in Norway, while field trials of prototypes are underway in Portugal (Atlantik Fish and IPMA), Greece (UPAT and UTH), and Italy (RefaMed).

These will provide data on general performance, oxygen transfer efficiency, and running costs. The project is funded through the EU’s 7th Framework Program and will run until the end of 2014.

The choice of aerator and its routine operation represent a balance between any anticipated increase in fish production and the extra costs of the aeration. A common practice in ponds and raceways is to use surface aerators such as paddle-wheels, propeller-aspirator pumps, air injectors, etc., which combine oxygen injection and water circulation. However, it is also possible to use diffuser-based systems that inject fine gas bubbles close to the bottom, using blowers that supply air at low pressure.

In ponds and big tanks where oxygen has to be distributed over a large area an advantage of submerged diffusers is the ability to create a large interface area between the bubbles and the water as the air rises slowly to the surface. The main cost of dissolved oxygen control by aeration is normally in the electrical consumption, which must be balanced against the aerator’s ability to transfer oxygen to the water. According to Grundvig, aerators, such as paddle wheels, loose a large amount of kinetic energy throwing the water into the air and the transfer efficiency may be as low as 1-2 kg oxygen per kWh. Submerged membrane diffusers are more efficient with a transfer efficiency of 2-3 kg O2/kWh.

The principal (patented) difference between this and other diffuser-hose systems lies in the ‘double hose design.’ The supply hose lies inside the diffuser hose, and the space between them is constricted (clamped together) every 1.5 meters (give or take) with small pieces of steel ribbon, to form a series of chambers between the supply- and diffuser hoses. The chambers receive air from the supply hose, which is directly connected to the blower, making it possible to have a similar pressure inside the chambers along the diffuser length.

Thus a more or less equal amount of air is diffused from each chamber. In traditional single-hose diffusers, the pressure decreases progressively along the diffuser length and more air is released near the blower than at the far end of the hose. Standard sections of the AirX hose can be up to 500 m long!

A basic part of the AirX project’s, experimental tests has been to maximize oxygen transfer efficiency. At the Oxyvision lab, the efficiency of a range of diffuser prototypes has been monitored in a seawater tank without fish. The test procedure involved combinations of air pressure and the resulting air-flow. In each test, the transfer rate was measured frequently throughout the injection period from 10-30% to 80-100% of DO saturation.

Based on the measured transfer rate and electricity consumption, the standardized aeration efficiency, SAE, can be calculated in terms of kg oxygen transferred per kWh. In the lab, a SAE of ca. 2.7 kg O2/kWh was calculated for the best test diffuser at low air pressure. This compares favourably with reported transfer rates in aerated ponds for fish and shrimp production, and indicates promising efficiency.

Trials have also been performed at IPMA’s research station in the Algarve, Portugal, with gilthead sea bream to study: i) the effect of fish density on oxygen consumption and fish performance; ii) the effect of different oxygen levels on fish performance. Results demonstrate the potential economic benefits of optimizing DO concentration.

The AirX diffuser system has also been installed in smaller concrete raceways used for producing sea bass fingerlings. The performance of the fish (FCR, SGR etc.) will be balanced against the costs of the aeration attempt (kg O2/kWh, kWh/kg fish produced), and time to return on investment will be assessed when trials are finalized at the end of 2014.

I am grateful to Henrik Grudnvig for explaining the principles of the AirX diffuser and for furnishing the photos. For more information email Henrik at: hgr@ti.no or: Henrik.Grundvig@teknologist.no