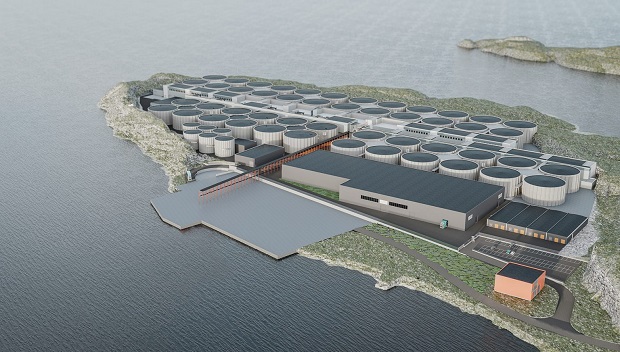 Having found that aquaculture’s issues regarding sustainability come primarily from a lack of monitoring capabilities, Dalhousie University computer science grads Mathew Zimola (CEO) and Hossein Salimian (CTO) knew they could help the industry address this need.

In 2018, the Halifax, Nova Scotia natives founded ReelData AI with the goal of using artificial-intelligence-driven technology to help land-based farmers boost efficiency, profitability and environmental sustainability. The startup has attracted venture-capital investment, and includes industry disruptor Atlantic Sapphire among its clients. The adoption of AI solutions is one of the major trends ReelData AI is seeing. Here are the big shifts they’re tracking that offer powerful signals of where the industry is and where it’s heading, writes ReelData’s Nick Punjabi.

1. Land-based aquaculture: RAS and flow-through
Many aquaculture visionaries claim that land-based farming is the future we need. This unique and cutting-edge approach to fish production was derived from environmental concerns surrounding ocean-based operations and the belief that there must be a better way. With Atlantic Sapphire successfully fulfilling their first commercial harvesting, the viability of the land-based route continues to grow, spurring an inflow of capital and specialists.

There are two leading approaches used today: recirculating aquaculture systems (RAS) and flow-through systems. Staunch proponents back and implement each method, with their decisions made based on the unique advantages and disadvantages of each.

RAS is a system where water is continually recirculated through a fish tank and designed to reduce resource requirements while artificially creating a healthy, natural environment for the fish. Critically, RAS uses extensive biofiltration to continuously and sustainably maintain water quality, monitoring and adjusting vital parameters such as oxygen and ammonia.

The technology has piqued the interest of entire nations. Case and point, Ireland is investigating if RAS technology can help reduce its dependence on freshwater sites for fish production. Through the SALMSON project, the country will implement a salmon-sector-friendly rollout, one that will provide a more productive smolt output through hatcheries. Ireland’s Marine Institute’s Newport Research Facility has even installed infrastructure that can support up to 44,000 liters and 12,000 Atlantic salmon pre-smolts.

The private sector is increasingly accepting RAS as a prudent business choice with production growth poised to skyrocket. Pure Salmon and Atlantic Sapphire are leading the way with planned Atlantic salmon production of 260,000 MT and 220,000 MT per annum, respectively.

Flow-through systems, also known as raceway systems, consist of a culturing method through which fish are raised in concrete-based basins powered by perpetual water flow that mitigates ammonia levels and metabolic waste.

A European company that will take advantage of flow-through technology at a considerable scale is Salmon Evolution, which is projected to build Norway’s largest salmon farm with an initial capital expenditure of £19.6M ($26.3M). The facility will be built to produce up to 36,000 tonnes of salmon annually using coastal-dependent flow-through technology.

Additionally, Icelandic-based Matorka uses flow-through tanks to raise Arctic Char, a fish breed similar to Atlantic Salmon. The company capitalizes on the country’s natural fresh water to power its farms, complemented by an automated oxygen system that adds oxygen to the water when necessary.

2. Adoption of advanced technology
Leading technology can drastically increase the profitability, humaneness, and sustainability of fish farms. This reality has been facilitating their widespread adoption within the industry.

For instance, farms are increasingly using artificial intelligence applications to gain access to information previously unattainable. Biomass estimation through AI enables farms to better plan their sales, preventing overproduction or underproduction of fish to appropriately meet demand. Feed accounts for roughly 70 percent of a typical land-based farm’s costs; thus, automation and optimization can drastically increase their margins and sustainability. Health analysis can be used to make sure fish are happy and healthy while also understanding/mitigating the company’s risk.

Furthermore, advanced technologies are being deployed beyond monitoring fish farms themselves. Blockchain is playing a crucial role in supply chain management as traceability grows as a priority in ocean productions. For example, Bangladesh-based ByteAlly plans to launch a blockchain-backed system to trace carp from farms all the way to consumers’ plates. This allows all checkpoints in the supply chain to know where the carp is coming from. Not only is this technology based on IBM’s Food Trust blockchain, it will use a handful of other advanced technologies, such as a cloud-based ERP and IoT infrastructure.

3. Biosecurity & optimizing fish health
In 2019, Scotland reported over 25,000 tonnes of farmed fish deaths related to disease. This was a record-high and a whopping 13.5 percent of total harvest. This insecurity is ubiquitous across every fish farm and, accordingly, solving these issues are of paramount importance. Keeping salmon and other fish healthy is essential to sustainable fish farming procedures. Harmful algal blooms, disease, sea lice and hazardous pesticides all pose serious threats.

Algal blooms can secrete toxins and deplete oxygen levels for fish, while antibiotics that prevent infections encourage the growth of dangerous, contagious bacteria to outside of the farmed fish population.

Sea lice are a common problem in ocean-based farming and costs the industry roughly a dollar to treat, per kilogram of farmed salmon, according to some estimates.

But innovations develop to address overall fish health and longevity. Stress management procedures are improving to prevent fish disease. The level of biosecurity instilled in a fish farm is dependent on the level of present and potential disease contaminants from internal or external humans, animals and objects. Accessible documentation and signage, staff training and keeping animal-health authorities informed are all proactive and reactive measures fish farms employ to enhance biosecurity.

Besides health monitoring, disease control, and external threat mitigation, many are experimenting with new fish feed alternatives, as the now more traditional supply of fish oil and fishmeal may be eclipsed by the demand of fish itself. Plant-based alternatives, insect-based substitutes, algal food products and food waste itself are all emerging fish feed solutions. For example, Nova Scotia-based DeNova Inc is producing a microorganism-based protein.

4. Rising demand & economic impact
21st century aquaculture has experienced a dramatic economic surge, with many countries demanding and producing fish at an exponential rate. As a result, they enjoy the economic stimulus the industry provides.

The World Bank projects that by 2030, the total aquaculture-supplied fish will reach over 93.6 millions tonnes. In 2013, aquaculture-supplied fish (97.11 million tonnes) overtook wild catch fish supply (91.75 million tonnes) for the first time. This complements the fact that in over 50 years, the average person consumes almost twice as much seafood.

5. Rising government support and investment
In 2020, governments all over the world have shown substantial support to the aquaculture industry. Beyond economic growth, countries support the industry’s environmental and financial sustainability.

In the United States, an aquaculture reform bill (AQUAA Act) is now in the Senate for consideration. If passed, it would enable the Department of Commerce to oversee new fish farm areas in US federal bodies of water.

In September 2020, land-based farmer Kingfish Maine received a water intake and discharge permit in Maine that will help advance the company’s plans in building a land-based facility. With the support of the Main Bureau of Parks and Lands clearing the lease application for the water pipes, the governmental support for land-based fish farming is evident in the United States.

Just like Andhra Pradesh, Lebanon intends to advance its aquaculture presence. As of September 2020, it was reported that the country is now quite involved with the UN’s Food and Agriculture Organization and considers both land and water-based agriculture critical to its long-term sustainability goals.

Mature technology companies, start-ups, governments and the many players of fish aquaculture, especially fish farmers themselves, all play a vital role in shaping the future of the industry – and it’s all happening now. We believe that RAS, flow-through systems and other advanced technology game changers all serve efficiencies and environmental sustainability. Fish farms and the entire value chain are better positioned to grow fish sustainably when empowered by the ever-growing industry boom, improved fish health care and global governmental support. We’re pleased to be a piece of the puzzle.