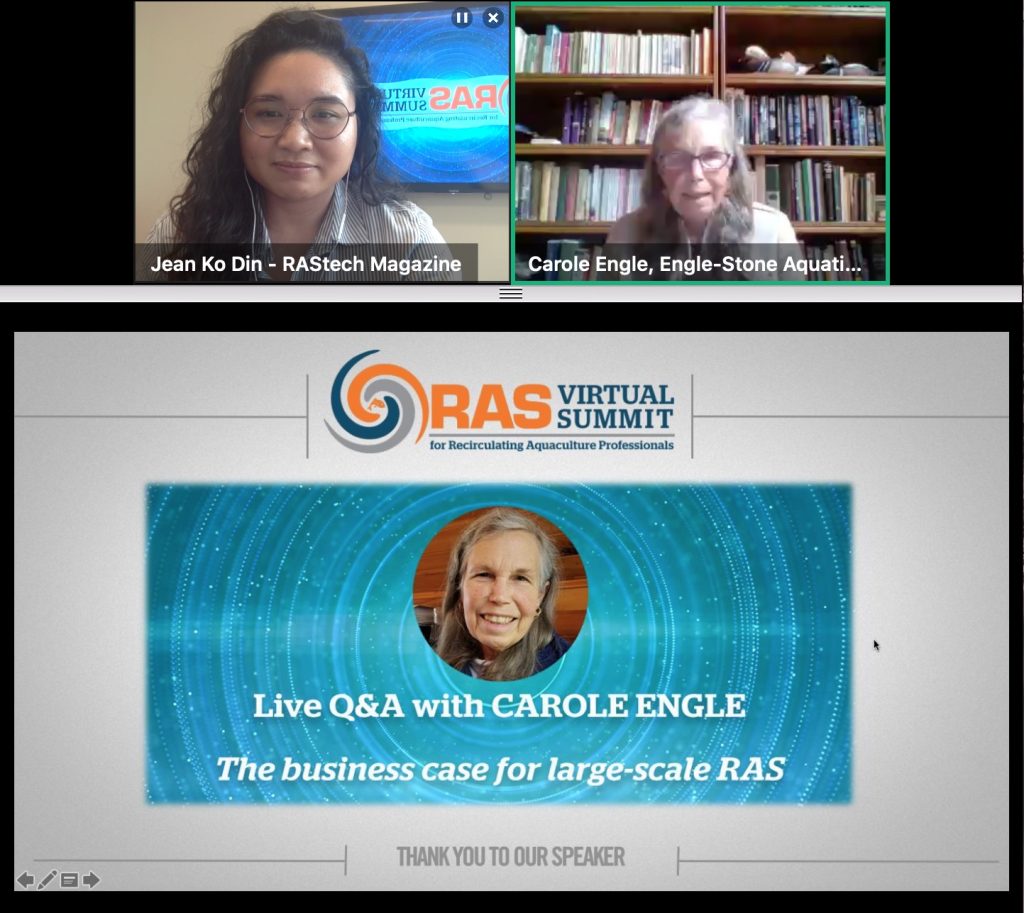 RAS technology offers exciting new opportunities for the aquaculture industry. But with so few real-world examples of these systems, there are still many unanswered questions about the business case of large-scale RAS. Aquaculture economist, Dr. Carole Engle, shared her insights during in a Q&A session at the RAS Virtual Summit on Sept. 16. Below are some highlights from the exchange. The full recording of this live event can be found at the RAS Virtual Summit main page.

Question: What are the main considerations for a business entering the RAS space?

Carole Engle: We finished a study recently where we compare key cost drivers across a variety of production systems. Economies of scale are real in RAS where capital investment
is quite intensive and quite strong. We’ve known this for many years. But what did jump out to me in this analysis is that the more established aquaculture sectors in the United States – like catfish production in ponds and trout production in raceways – make far more efficient use in labor and capital, in terms of cost per pound in fish products than RAS do.

And so one of those other considerations that I would throw out is to pay equally close attention to efficiency metrics of labor and capital and not just economies of scale.

Question: What are the most important cost factors involved in a RAS project?

Engle: Feed is a major cost, so it’s important to manage a system that keep a low-feed conversion ratio, which is possible in RAS due to climate controls. Capital cost is also
very high. If it’s borrowed money from a bank, then you’re paying an interest rate. But if you get that capital from an investor, that investor’s going to want or need a return at some point. So capital needs to be used efficiently. Labor is also a major cost in RAS. Then after that, like most systems, it becomes an energy cost that are some of the greatest costs in a RAS system.

Question: What is your take on developing countries and potential RAS projects there?

Engle: Location decisions and what kind of aquaculture business is going to make sense is really quite site specific. I would urge people to step back a little bit and not just be locked into RAS. It makes a lot of sense to be able to locate closer to some important market areas and if the appropriate business models can be put together, it makes a lot of sense. But not everywhere. Pond-based systems and raceway-based systems are very sustainable production systems in the U.S., the EU and elsewhere.

Question: What do you think the industry will and should look like in 10 years?

Engle: The overall aquaculture industry is going to grow around the world. There’s no doubt in my mind. I believe RAS is going to be amenable in raising some species on a
farm-level, at a higher production level than we’ve seen before. But I also think we’re still going to have shellfish produced along our coast and around the world. And I also think we’re still going to have some species, like catfish being raised in ponds. I don’t see that disappearing and going away. And I don’t see trout production in raceway going away.

Watch the full recording of the live Q&A event below: