Features
The salmon doctor is in 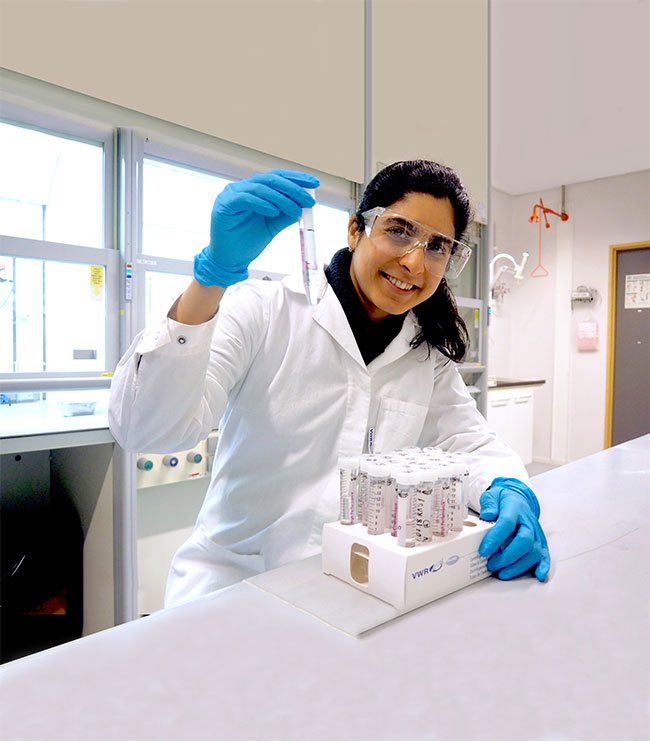 As a process engineer, Sharada Navada wants to make a positive impact on the environment. Photo: Kruger Kaldnes AS

Sharada Navada had never given much thought to the production cycle of farmed salmon until a challenge presented itself to her as she was working at a wastewater management company.

As a process engineer, Navada’s career aspirations were primarily focused on making positive changes for the environment, but her fascination with fish species and interest in seeing them grow in better conditions led her to develop a powerful new treatment process for recirculating aquaculture systems (RAS).

“I think of it as being like destiny because I had set out to be an environmental engineer,” says Navada, who works with Sandefjord, Norway-based Kruger Kaldnes AS (Veolia Water Technologies, Norway). “I thought I would be dealing with wastewater, and I always had an interest in doing something about sustainability or something related to cleaning up the environment.”

Kruger Kaldnes is a supplier of recirculating aquaculture systems for the land-based aquaculture sector. Now, the company is the first RAS supplier with someone on their team who holds a PhD in “salinity adjustment on Moving Bed Biofilm Reactor (MBBR).”

Her PhD was part of CtrlAQUA SFI, an international project to develop technological and biological solutions for closed-containment aquaculture. It’s the result of a collaboration between Nofima, Krüger Kaldnes AS and Norwegian University of Science and Technology. Nofima, which researches sustainable food, are leaders in RAS technology research. The system is now being used at the Nofima Research Institute.

“This field has been subject to some amount of guesswork earlier, and this is one of the first systematic works of research that has been conducted in this field. Several of Sharada’s results were ready a couple of years ago, and they have already been applied by Nofima and within the industry,” says Espmark.

Navada joined Veolia in Pittsburgh, Pennsylvania, having completed her Master of Science degree in environmental engineering at Carnegie Mellon University where she studied water chemistry and water treatment.

“It just turned out that Norway was doing aquaculture, and we had an aquaculture request at the same time in the U.S., so I was put on a standard fish farming tender for that project, and that’s how I got involved in the whole aquaculture field,” she says.

A year after starting work in Norway, Navada began her industrial PhD dissertation on the water treatment challenges faced in land-based farming of Atlantic salmon at the University of Science and Technology (NTNU) in Trondheim. In February, she defended her dissertation addressing technological and biological solutions for closed systems and Atlantic salmon farming.

The challenge
In a RAS facility, Atlantic salmon begin life in freshwater and then be transferred to seawater. One of the biggest challenges is managing that transition from freshwater to seawater, says Navada.

“The fish produce ammonia, and it’s very toxic to them. To keep the fish alive, we need to remove that ammonia using the treatment system,” she says. “Specifically, I was looking at the biological process of ammonia removal – which is the process that is most critically affected when we change the salinity.”

Her goal was to find ways to make the biological system more tolerant to salinity changes. “If you have the salinity change and it impacts the bioreactor performance, then you produce ammonia or nitrate, and both are very toxic to the fish. The goal was to avoid this happening.” 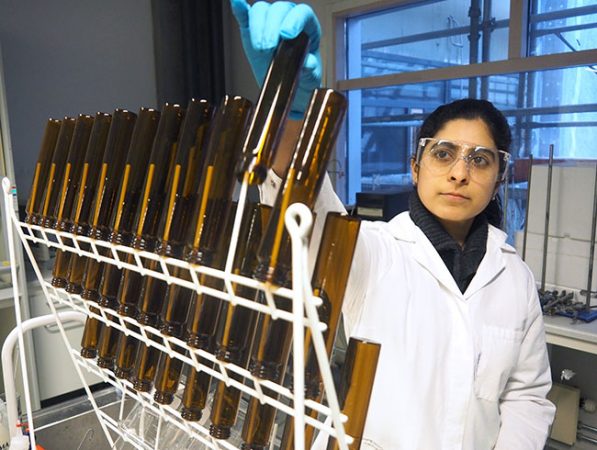 Navada was on a quest to discover ways to make RAS biological systems more tolerant to salinity changes. Photo: Kruger Kaldnes AS

The solution
In approaching the challenge, Navada considered various solutions to address the poisonous ammonia produced by the fish. In land-based fish farming facilities, biofilters are used to reduce the ammonia content in the water. The effect of the bioreactor can be reduced by the content of salt in the water. This can lead to ammonia poisoning or nitrite accumulation.

Navada’s PhD dissertation addressed how to “mature” the bioreactor in the most optimal way in relation to the content of salt in the water and ensure the best conditions for the fish. One of the questions she wanted to investigate was: How fast is it possible to change from freshwater to seawater?

“First, we tried to see if we could simply increase the salinity at different rates in a RAS system – either slow or fast, and whether we could do it without harming the fish. What we found was that no matter how fast or slow, we would still have a drop in the efficiency of the bioreactor,” she explains. “What that means is it’s quite tricky to increase the salinity in a freshwater system.”

From there, Navada wanted to see if there were any microbial strategies to make the bioreactor more tolerant to salinity changes. “That’s how we did the rest of the experiments to see if we could make this whole system more tolerant to salinity change even before we put the fish in, because once you put the fish in, then you are very limited by what you can do,” she says.

“Through my research, we discovered it makes it easier to do this entire salinity change in the same system without having to move the fish and not have a separate system for seawater – that’s the biggest advantage of doing this,” she says.

The process they arrived at was that in the RAS system, the water from the fish tanks goes through mechanical filtration to remove the particles the fish produce and from the fish feed.

“Then it goes into what we call the moving bed biofilm reactor,” says Navada. “It’s an aerated tank and has plastic carriers. You can see the bacteria growing on the plastic carrier, and that bacteria removes the ammonia produced by the fish. In a nutshell, that’s what the bioreactor does,” she says.

As a vegetarian, Navada doesn’t eat salmon but says she has a deep desire to see them produced under better conditions.

“Every day of research has made me fall even deeper in love with these fascinating creatures,” she says. It’s why she finds research on water quality to improve fish welfare and sustainable fish farming so rewarding. “I want the fish to have a good life. The demand for seafood is increasing, and non-sustainable fishing is emptying the oceans. RAS can represent a sustainable solution by producing seafood in land-based systems with water treatment and reuse.”

Next steps
“Now we’re looking at removal of nitrogen through denitrification and recovery of nutrients such as phosphorus. I am quite interested in those technologies in which you can further reduce water consumption through additional biological processes in water treatment processes,” she says.

And while Navada never planned to have a career in aquaculture, she sees so many opportunities to take her research further.

“At the moment, I feel that aquaculture is a fun field to be in because it’s developing so fast. After doing my PhD, I like researching and discovering new things. Wastewater treatment is a mature field and doesn’t have as much scope to develop new things as much as aquaculture,” she says, noting that she also has an interest in the possibilities of aquaponics.