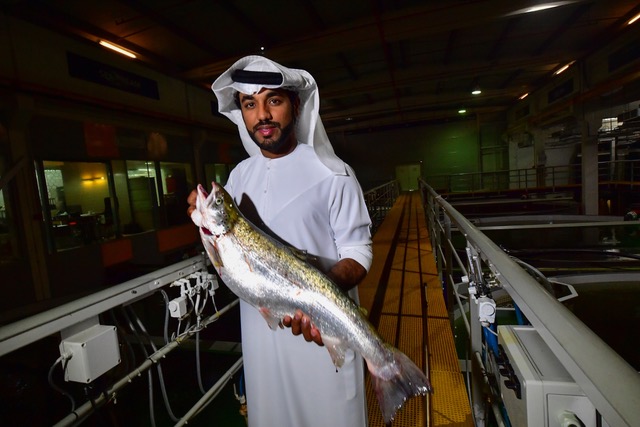 In response to the United Arab Emirates’ push for food security and sustainability, Fish Farm LLC has made history with its new land-based commercial Atlantic salmon farm in Dubai. In this photo is Fish Farm CEO Bader Bin Mubarak (Photo: Fish Farm LLC)

Is it possible to produce salmon in the desert? In the 2011 movie, Salmon Fishing in the Yemen, actor Ewan McGregor played Dr. Alfred Jones, a fisheries scientist challenged to help fulfill the wish of a Yemen sheik to bring sport fishing to the southern end of the Arabian Peninsula.

Enjoying a fresh fish that didn’t come shipped from Scotland may seem like something out of a Hollywood fantasy, but through the application of recirculating aquaculture systems (RAS), the dream of locally produced salmon has become a reality in Dubai.

About 92 percent of all fish products consumed in the United Arab Emirates are imported. With the increasing global concern about food security and the general desire to have access to food that is produced more locally, it’s no surprise that those living in Dubai would want to consume fresh fish that didn’t have to be imported.

“We’re trying to make inroads into the 92 percent of imported fish as part of the government’s pledge for food security in the UAE and trying to do it in the most sustainable way possible,” says Nigel Lewis, aquaculture development manager at Fish Farm in Dubai. “When it comes to salmon and other species that are not endemic here, you have to have environmentally-controlled conditions. The only way to do that is RAS. If you put a salmon in a cage here, it will just die within seconds. The temperature is such that even in winter, it’s way above the lethal upper temperature. They will die.”

Fish in the desert
Producing salmon in the desert is the vision of Sheik Hamdan, Crown Prince of Dubai and Bader Bin Mubarak, the CEO of Fish Farm LLC. Through RAS, they are producing salmon and other species such as king fish, royal sea bream, and seabass on land in Jebel Ali, just outside Dubai.

Two years ago, the facility received salmon eggs from a hatchery in North West Scotland. Using seawater from the Persian Gulf, the RAS system cools the water to the required temperature for salmon to thrive.

“About three percent of the total [water] needs of the system are brought from the sea, and the other 97 percent is supplied by the recirculation component of the system,” says Lewis. “Then we chill the water quite dramatically for the salmon, sometimes from 30 degrees C in the sea in the summer to 15 degrees C in the RAS system itself. The other species’ temperature is not as critical and runs anywhere from 24 to 28 degrees C.”

The salmon live the first year in fresh water and eventually become smolt. The eggs hatch and the small fish grow in freshwater until they are about 100 to 200 grams in size. They are then transported into saltwater. When salmon go into smoltification, it changes the enzymes in the gills so they can survive in saltwater – if they don’t go through that stage, they will die. 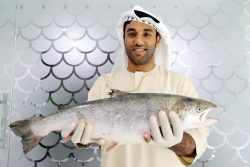 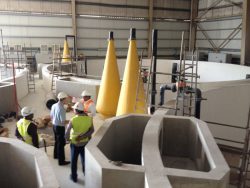 Expansion plans
Jacob Bregnballe of AKVA Group in Denmark is a marine biologist who has helped develop and manage the RAS project at the Fish Farm LLC project. He says that to be competitive, operations such as Fish Farm LLC need to grow.

“They [Fish Farm LLC] do have plans to expand. In any kind of new business, there are first movers, and they gain a lot of knowledge, and when they then expand, they know much more than others going into the business,” he says.

At the Fish Farm facility, in addition to salmon, they also produce sea bass and king fish, which grows rapidly in the controlled conditions.

“European sea bass is produced in Europe in large quantities, but there is difficulty getting them to a large size because of the winters the Mediterranean region have, during which the sea bass and sea bream don’t grow.

“Because we can control the environment here, we grow them to a large size in about half the time it would take in the Mediterranean, so we’re producing something other people can’t produce,” he says.

“And salmon in the desert – nobody has done it really, and the response to the fish has been good. Everybody is happy to buy UAE locally-produced salmon.”

Fish Farm also has cage farms located in Dibba Al-Fujairah on the Gulf of Oman, and a hatchery in Umm al-Quwainand. The company will soon have two additional hatcheries as it takes over former government-run facilities. The government had two hatcheries for restocking aimed at greater sustainability and protecting the local fishery, which was under threat.

“They wanted to do something with the hatcheries, so they did the study and found a commercial hatchery producing juveniles for fish farms was the way to go because that indirectly protects the environment by reducing fishing pressure,” says Lewis. “We’ve now taken that on as a private-public partnership.”

The RAS is a component of that integrated project. In the RAS system itself at Fish Farm LLC, there are 15 people working on site.

“We have done the proof of concept and have a good product and good prices in the market, and want to maximize that through expansion,” he says.

There are 34 tanks at the facility, with four used for producing salmon and the balance to produce king fish, European sea bass and sea bream. The goal is to produce 10,000 to 15,000 kilograms of salmon each month. Right now, the total output is annually about 100 tonnes.

“The larger facility is for Atlantic salmon where we have about 200 tonnes capacity and altogether about 300 to 400 tonnes,” says Lewis.

“The challenge is in finding juveniles from across the world and transporting them successfully to the UAE.”

There are two buildings at the location, one that contains three independent RAS systems with about 30 tonnes of capacity.

Most of the employees at the facility are trained in-house, and have aquaculture skills and some rudimentary RAS skills. AKVA has trained the staff onsite as the operation has progressed.

Lewis says it’s an “inevitability” there will be greater interest in RAS systems for the production of salmon and other species because cage farms still have many issues to overcome, such as parasites and where the effluent from the fish farms goes into the sea.

“I do appreciate that a well-positioned cage farm doesn’t have a great environmental impact on the environment. However, there are other things such as sea lice. RAS systems eliminate all those weaknesses in the process,” he says. “But you don’t want to produce sea bream in a RAS system there or anywhere else because you have to be able to compete on cost of production.”

1 Comment » for Swimming upstream: Making salmon farming in the desert a reality