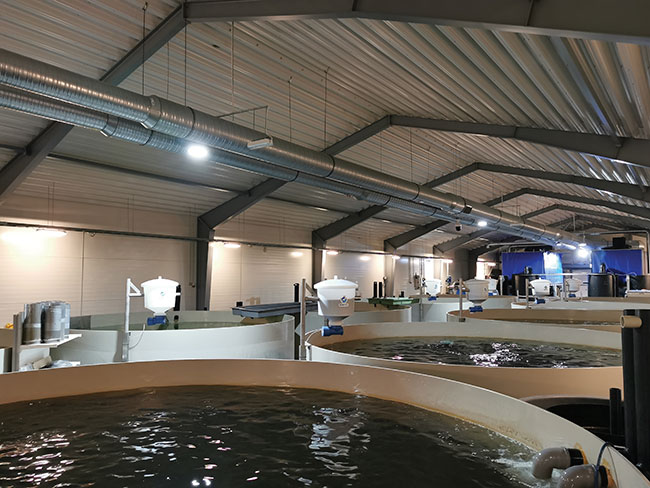 SIA Blue Circle’s Jaunciedras facility will produce up to 110 tons of Arctic char annually once it exits the pilot phase and reaches full production.

The farm is in a pilot phase currently, with roughly 40 tons of fish on site, but if all goes according to plan the facility should have up to 110 tons yearly production of fish – from egg to slaughter – in the coming years.

SBC managing director Lauris Apsis says the company was formed for the specific purpose of demonstrating that recirculating aquaculture systems could truly work in Latvia, and could serve either the local or export markets.

“Six years ago, when we started, me and my brother started to think about what the possibilities are to develop fish farming in Latvia,” says Apsis.

“We quickly recognized the future possibilities of RAS systems. This is something new and most of the fish farming is coming inland from the sea and the ocean. These RAS systems give the possibility that you can theoretically build it anywhere that you have water and electricity.”

Latvia is a country located on the Baltic Sea, bordered by Estonia on the north and Lithuania on the south. Aquaculture accounts for only 0.7 percent of total fish production in this Eastern European country. Most of Latvia’s fish and seafood production are from commercial fishing, with some imports, according to data from the Food and Agriculture Organization of the United Nations.

Technology partner
Lacking direct experience in the industry, SBC sought a partner who could share their expertise with the fledgling operation. Enter CAO, a company that launched formally in 2016 but was the result of a much longer-running partnership between wastewater treatment company Clewer Oy and aquaculture specialists Kalavesi Consultants Ltd. CAO fish biologist Riitta Myyrä says the company was formed to provide reliable, maintenance-free solutions for small and medium sized RAS farms.

“Our principle is based on modules, which can be adapted and combined for different kinds of needs,” says Myyrä. “Modules can always be tailored for different places, fish species and needs. And we have experience working in fish farms, we know what we’re talking about when making designs and guidance for the farmers.”

CAO’s experience and expertise apparently came across very clearly. In recalling the early meetings between the two companies, it became immediately clear for Apsis that the CAO representatives knew exactly what they were talking about and that they could help SBC achieve its goals.

“They were professional and trustable,” says Apsis. “Here in Latvia we have some RAS system projects, but most of them are not working or not profitable. Clewer provided technology and knowledge.” 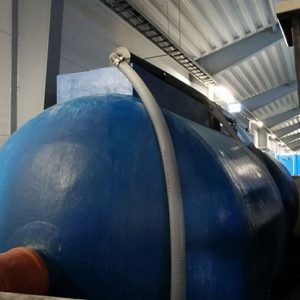 The round shape of Clewer Aquaculture Oy’s self-cleaning Rotating Bed Bioreactors makes it easier to rotate carrier mass and allows filling ratios up to 90 percent. 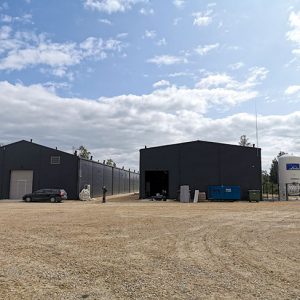 Jaunciedras is comprised of two buildings – a juvenile hall and an ongrowing hall. Between them, they can handle the entire production cycle from eggs to market-ready fish.

On the farm
The farm, called Jaunciedras, is comprised of two 1,000-square-meter buildings – a juvenile hall and an on-growing hall. The facility draws water from 100-meter deep bores, running through eight liters of water per second. Construction was completed in December 2019 and today there are more than 300,000 fish on site. The system has a 700-kg daily feeding capacity with solids removal, a gas exchange unit, a low-head oxygenation system, UV-filters and ozonation in a combination that ensures balanced water treatment. CAO developed the design of the farm and provided their Rotating Bed Bioreactors (RBBR), as well as information and training in their use.

CAO’s website says the RBBR’s round shape makes it easier to rotate the carrier mass, allowing filling ratios up to 90 percent and ensuring that air blowing into the reactor moves the entire carrier mass, leaving no dead zones or excess biomass inside. They also tout that the units are self-cleaning and practically maintenance-free.

“That’s something that’s been a problem in RAS farms,” says Myyrä. “Moving or fixed bioreactors, you have to clean those quite often. But our technology circulates the whole mass so you don’t have to clean it. One of the main points is also the solids removal, which is taken care of in both tank and system levels. This can be seen in the good water quality and wellbeing of the fish.”

“They can handle what they promise,” says Apsis about the RBBRs. “That’s the most important thing. As soon as it was possible to launch the system, we put in as many fish as possible. These bioreactors work as they’re supposed to work, they can handle what is expected.”

Market proximity
Apsis says that there isn’t much that needs to be specifically tailored for farming Arctic char – the facility could as easily grow any other cold water species such as rainbow trout or triploids. But he and the other principals at SBC are thrilled to finally see the RAS project they dreamed of entering production and in a location that makes logistical sense, for access to clean, fresh water and access to markets.

“We evaluated the location for how close we are to the markets,” says Apsis. “In this position, we can get fish to Nordic countries within 24 hours. We can deliver fresh fish into the market in Finland or Sweden or any other country. We’re also very close to the Russian border and close to Central Europe. That access was a pretty big trigger for us.”

Apsis says that while the facility is still considered in its pilot stage, they are already looking at ideas for expansion. But the company will be careful to temper those ambitions by basing any such decisions on market conditions and sales opportunities.

For CAO, the SBC facility is the biggest project that the company has worked on to date. Myyrä says they have been very encouraged by the collaboration, noting that it is a perfect opportunity for the company to see their solutions at work outside of the research laboratory settings where they had most commonly been used previously.

Myyrä struggles to identify any significant challenges with the project – everything went very much according to plan until the COVID-19 pandemic. CAO had been providing ongoing consultation and training in the early stages of the pilot project, but travel restrictions have prevented them from visiting the site.

“We had been looking at things for them and helping where needed but we can’t go to another country now,” says Myyrä.

In the meantime, CAO continues to provide support via email and phone. Myyrä says that CAO are also looking at some new ventures which they should be keen to announce officially in the coming weeks.